It appears that many of us are in for a rather high impact winter storm.  Affects in central Alabama will be a Wintry Mix of snow/sleet and freezing rain which could have a significant impact on travel.  In east central Alabama, including Lake Martin, a Winter Storm Warning has been issued.  Again it could have an extremely hazardous affect on travel.

A Winter Weather Advisory covers much of central & north Alabama as far south as Montgomery, Lowndes, Macon and Lee county from Friday through Saturday morning.  Light sleet and freezing rain accumulations area expected, but the impacts could be significant especially overnight Friday night and Saturday morning.  Here’s a look at forecast ice, which could be most significant along the I-85 corridor.  “The sweet spot”, so to speak. 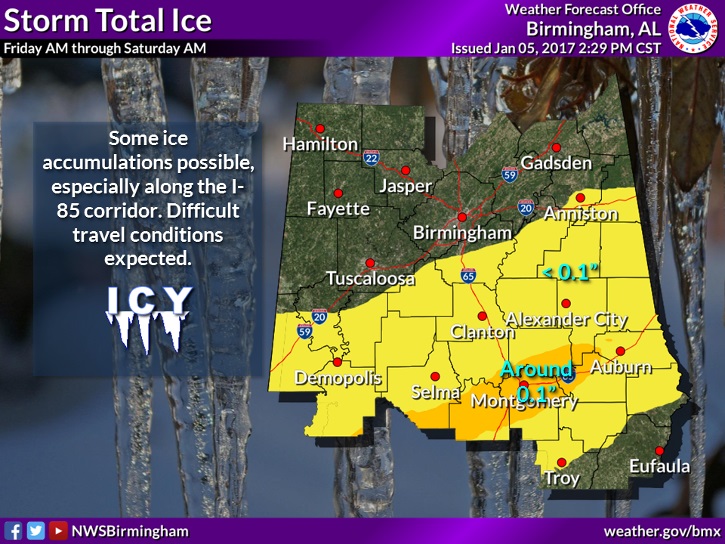 The better chance of snow would be father north A Winter storm Warning has been issued for east central Alabama. It extends as far south as Chilton, Tallapoosa & Coosa County.  Accumulations of 2-3 inches of snow & sleet is possible.

Up to 1-2 inches of snow expected in the Tuscaloosa and Birmingham areas, and across parts of west central Alabama. 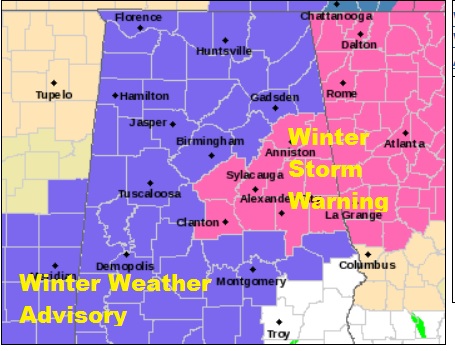 SEVERAL CLOSINGS:  As you can imagine, there have already been many schools that will be closed tomorrow, including all Montgomery, Elmore and Autuaga county schools.  The list is growing.  The Governor has issued a state of emergency.