NOWCAST:   Temperatures continue to drop steadily across central Alabama with widespread precipitation.  It’s mostly rain in south Alabama.  But across north central Alabama, widespread reports of sleet from Sumter county in the west to Chilton, Shelby, Jefferson and Cherokee county.  It’s freezing from Shelby county northward.  Montgomery and Greenville are at 37.  Many businesses are closing early.  We’ve heard of several that will be closing by 2.  Even the city of Montgomery talked to me, and I’m guessing they will let their folks go around that time.  Most schools are either closed or letting kids out early.  Nothing official.  Scroll below for some interesting Future Radar snap shots. 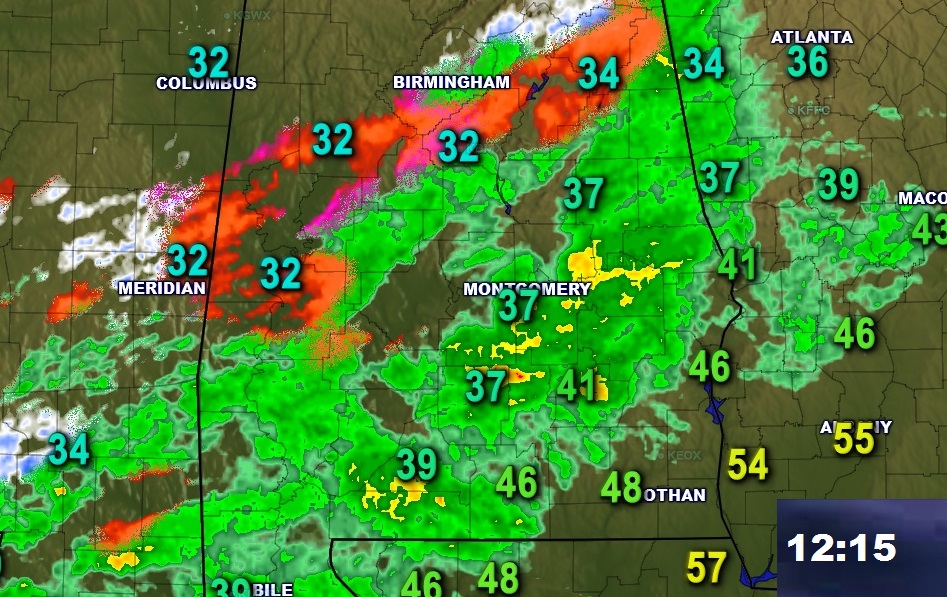 FUTURE RADAR:  Shows the freeze line near Prattville at 8PM with a sleet/freezing rain mix southward.  Near freezing Montgomery area indicated by 10 on this model.  Back end of the precip show into far east/southeast Alabama by 2AM. 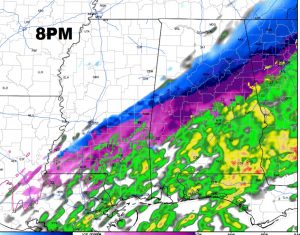 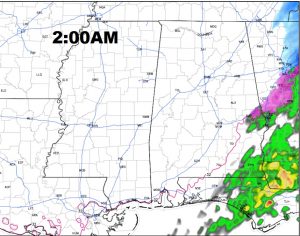 WATCH AND WARNING MAP:  No Changes for now, However, a new forecast update from the National Weather Service should be out later this afternoon.  Generally we should see that update by 3 or 4PM. 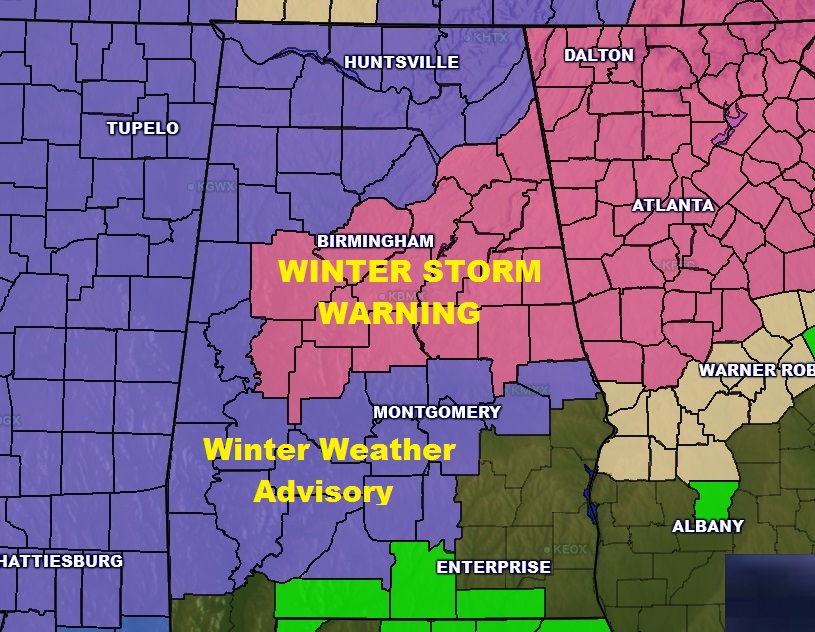 ICE ACCUMULATION:  Concern continues to grow for icing accumulation from freezing rain/sleet.  The greatest concern area has shifted northward to the I-20/I-59 corridor where .10 to .15” could accumulate.  Father south in the I-85 corridor, accumulations of up to .10” ice is possible.  This could lead to extremely hazardous travel.  Temperatures will fall below freezing tonight, perhaps well before Midnight, in the I-85 corridor.  Possibly earlier that that. 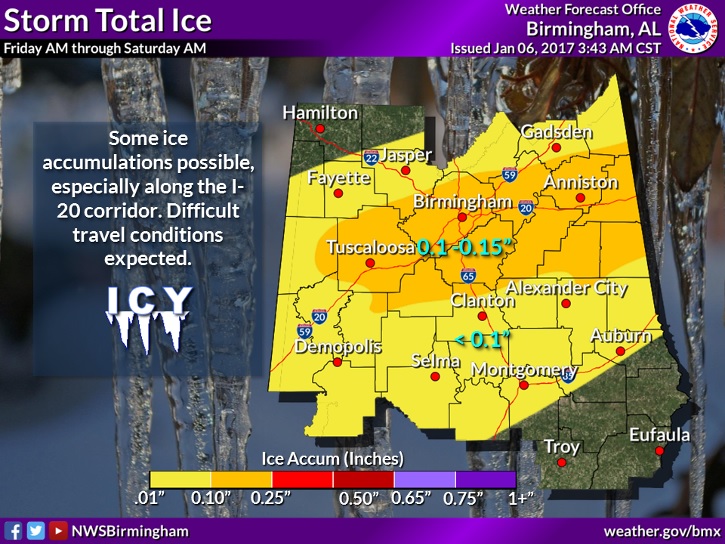 As for the accumulation of sleet & snow, which is totally different ballgame, the biggest accumulation is still expected in the Winter Storm Warning area from Perry, Chilton, Coosa, Tallapoosa and Chambers county northward where 2-3” and in some cases 3+” are possible.  Travel will become extremely hazardous. 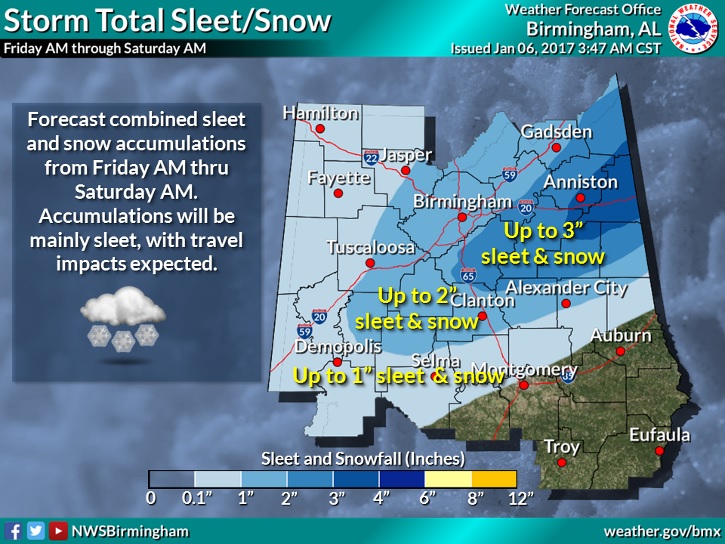 Check out these projected brutal wind chill numbers for 6AM Saturday Morning! 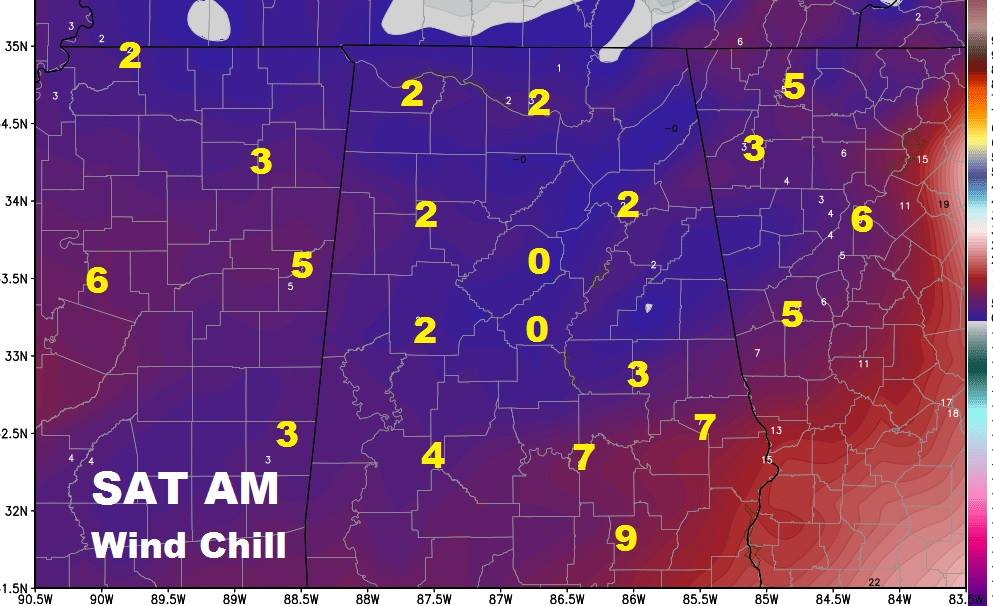 STAY WEATHER AWARE:  We will have additional Blog updates as needed later this afternoon and tonight.  They will appear on your Weather App, on Facebook and on Twitter. 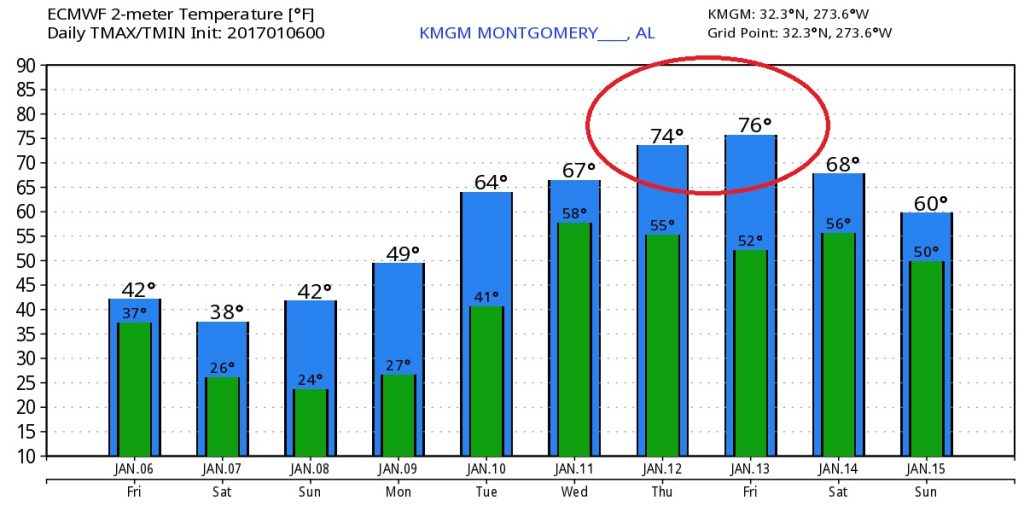