The threat of severe weather, which began well before Dawn has now ended, for now across central & South Alabama.

There will be a lull during the afternoon, but more severe weather is in our future, by this evening, tonight and much of Sunday morning.  This afternoon there may even be a bit of sun, mixed with clouds, which will allow temperatures to skyrocket into the 70’s.  That afternoon heating, however could be fuel for the fire for what comes later, as the atmosphere reloads for the next round of severe weather.  Here’s the outlook for severe weather today from the Storm Prediction Center.

ROUND 2:  .  A new band of showers and storms will overspread the area this evening and tonight. Potential exists for supercell thunderstorms, which will rotate and produce tornadoes. The threat continues through the overnight hours tonight.    Tornadoes are possible,  along with damaging wind gusts 60+ mph and golf ball size hail.  The updated outlook from the Storm Prediction Center shows a large Enhanced risk area, roughly from the US 80/I-85 corridor southward.  A moderate risk has been added farther west for parts of MS/LA/AR. North Alabama is under the standard “slight” risk. 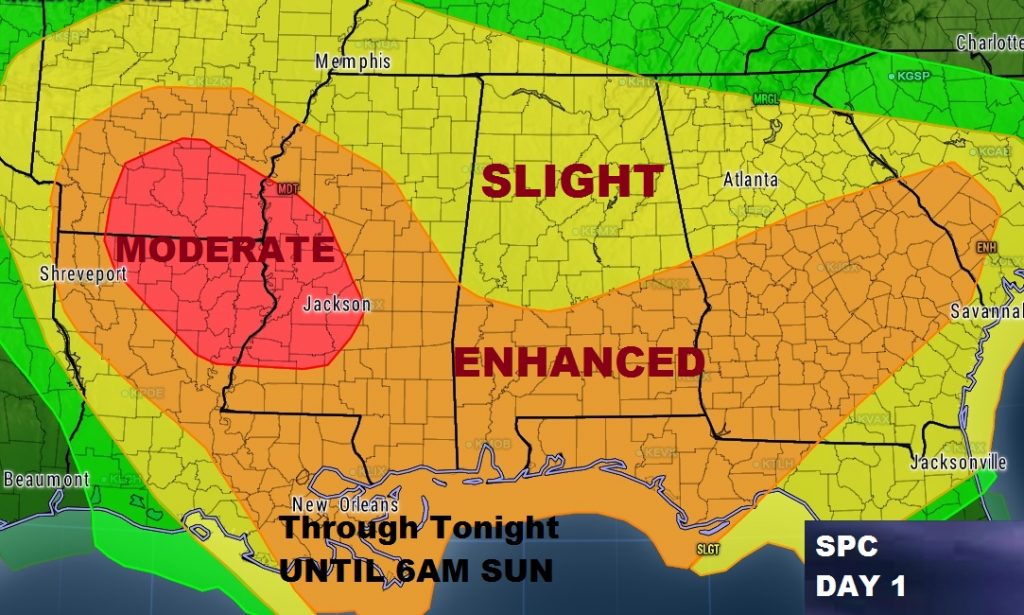 TIME LINE:  This graphic from NWS gives a good idea on the general timeline.  From roughly 11PM in the west to about 6AM in the far east.   That’s just a good guess, so be ready before and after those times. 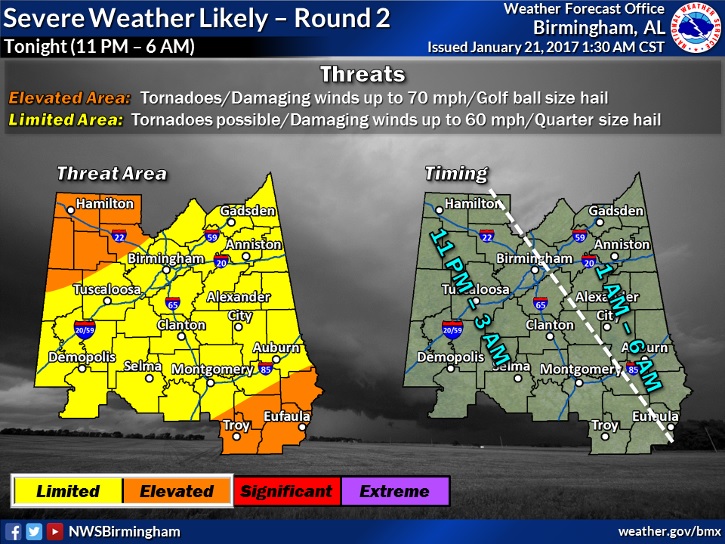 By Sunday morning at 6AM, the new Day 3 outlook from SPC shows a morning “slight” risk covering much of east and southeast Alabama.  But late morning, or perhaps around lunchtime, the threat will have shifted east into Georgia and Florida. 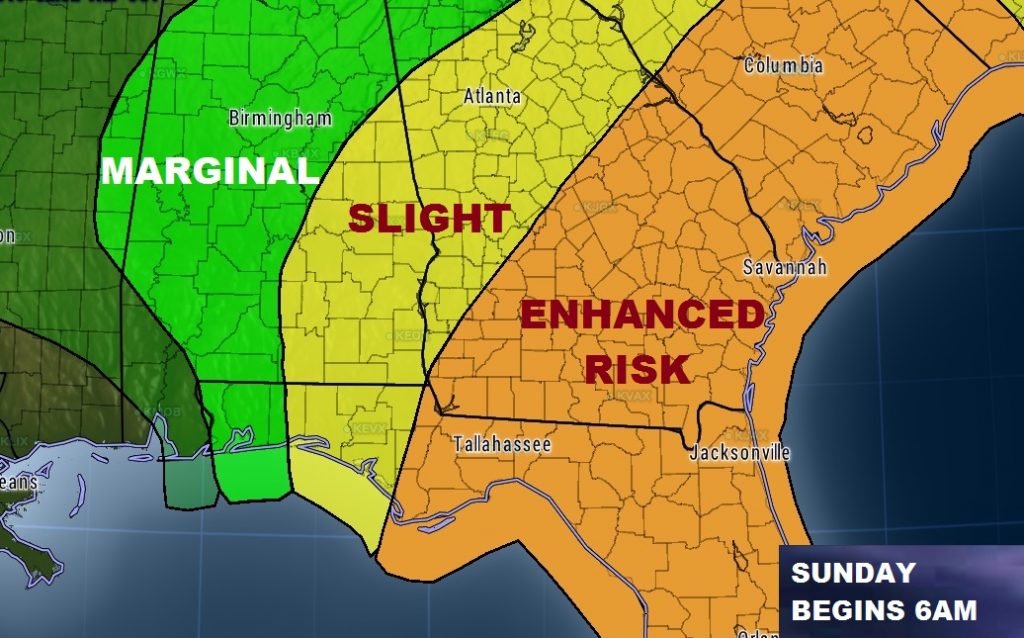 SCATTERED DAMAGE REPORTS FROM ROUND 1:

PIKE COUNTY:  Weak tornado damage path was found by emergency management starting just west of the banks feed mill on Alabama hwy 93 and going east to county road 4405.  The sirens are currently DOWN across all of Pike Co. It’s in the process of being repaired, but no estimate on restoral at this time. They went down during the earlier storms.  The City of Troy sirens are all functioning.

TALLAPOOSA COUNTY:  There are multiple trees down across the county with some utilities effected and road blockage. Most all roads are cleared and utilities are being restored. No structure damage reported.

MACON COUNTY:  Only reports of damage in Macon Co was in Tuskegee, the MXX radar is about 5 miles from here thats no good that it is now down hopefully it will be back before tonight. Also the Tornado Siren in Notasulga is down, it did not activate this morning after multiple attempts to tone it out.

DALLAS COUNTY:  Tree down across car in Sardis, al

LEE COUNTY:  Widespread reports of trees and powerlines down across lee county.

ELMORE COUNTY:  Mayor reported scattered damage to a few buildings in Wetumpka and a lot of debris on the roads.