After Irma is done with Florida, the storm heads for the Georgia line, perhaps entering the state by early Monday afternoon as a full fledged hurricane.  Then, curving northwestward toward the Alabama border Monday evening.  Cold be not too far from Lake Martin, late Monday night just after midnight, before being downgraded to a depression over north Alabama by Tuesday morning.  We will be on the west side of Irma, so the tornado threat will be rather low.  Still, though, tropical storm force wind gusts could easily bring down to some trees and powerlines which will likely lead to sporadic power failures.

TROPICAL STORM WARNING:  Damaging wind gusts are possible Monday afternoon and Monday night.  Sustained wind of 30-40 mph will gust as high as 50+ perhaps.  Higher gusts closer to 60-70 are possible in Alabama’s far eastern & southeastern counties.  This will result in some structural damage, but also, a large number of trees down, causing powerlines to come down and scattered power outages are a good bet.  Please secure any loose objects around your property which could be blown around during the strong wind gusts. 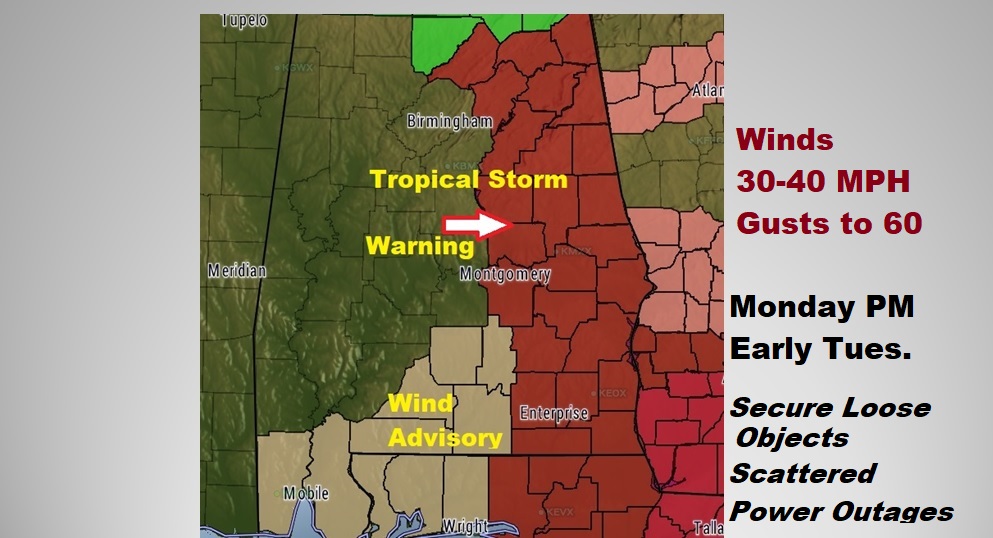 POTENTIAL WIND GUSTS from the Euro models…  Notice the numbers really start to increase as you work your way east to the Georgia border where 70+ mph gusts are possible. 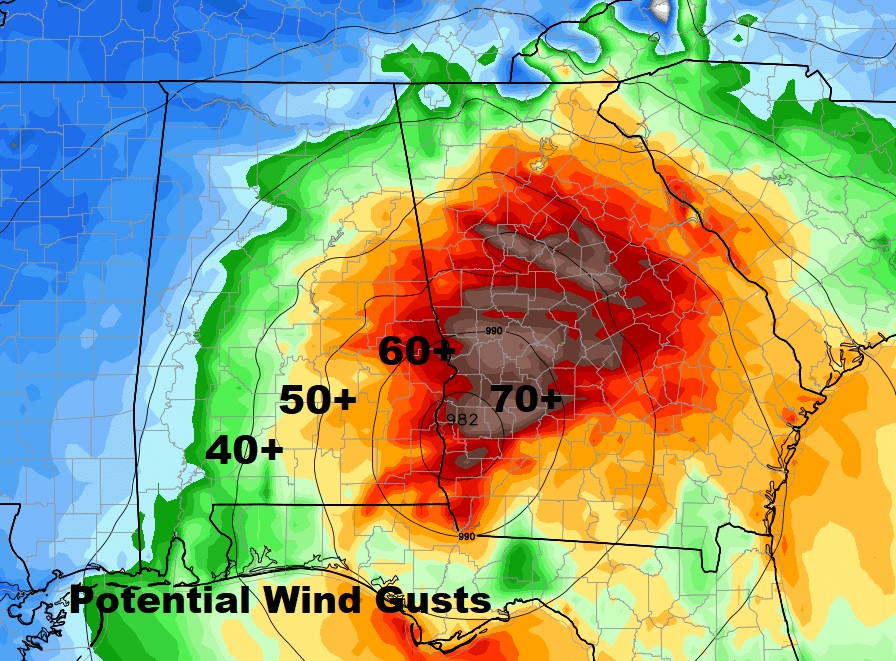 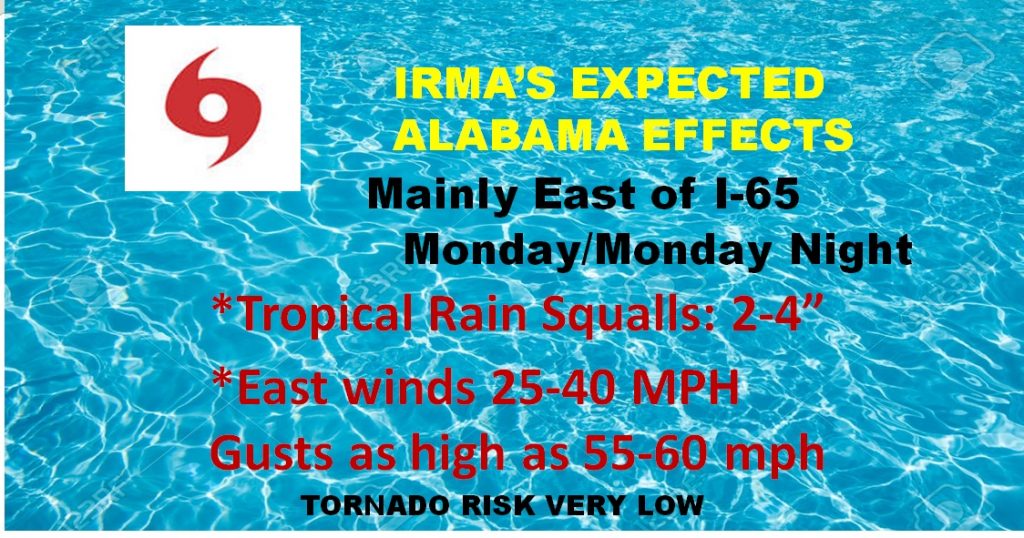 IRMA’S FUTURE TRACK:  The Euro model has been the best model so far with Irma’s track so, we will continue to ride that horse.  The storm enters east Alabama near sunset Monday night, on it’s journey northwestward.  It will likely still be a Tropical Storm by about 1AM Tuesday, perhaps located just SW of Lake Martin.  By morning, it will likely only be a depression or perhaps remnant low northwest of Birmingham.  Winds and rain will decrease dramatically beginning Tuesday morning, and big improvements by Tuesday afternoon. 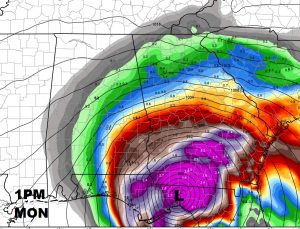 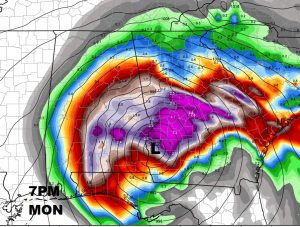 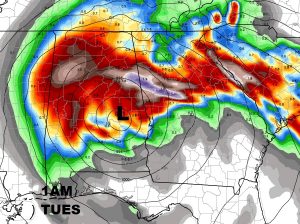 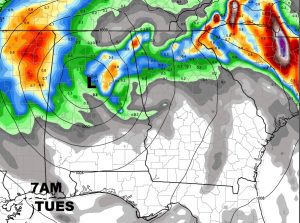 RAINFALL POTENTIAL:  Since the storm will be moving at a pretty good clip, rainfall totals won’t be too excessive.  Generally 3-5” are a good bet from about I-65 eastward.  Much heavier amounts are possible near and over the Georgia border. 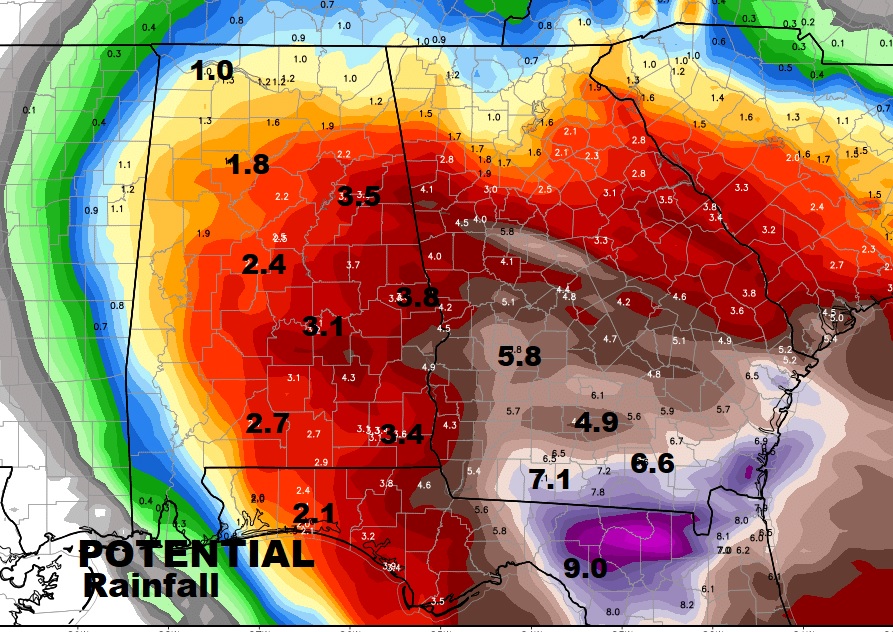 WHAT ABOUT IRMA RIGHT NOW? :  Here’s the latest 4PM information from the National Hurricane Center.   Now downgraded to Cat 2 with 110 mph winds, 5 miles north of Naples, moving north at 14.  Significant tornado threat continues for much of Florida.  Next the Tampa Bay area is Irma’s sights. 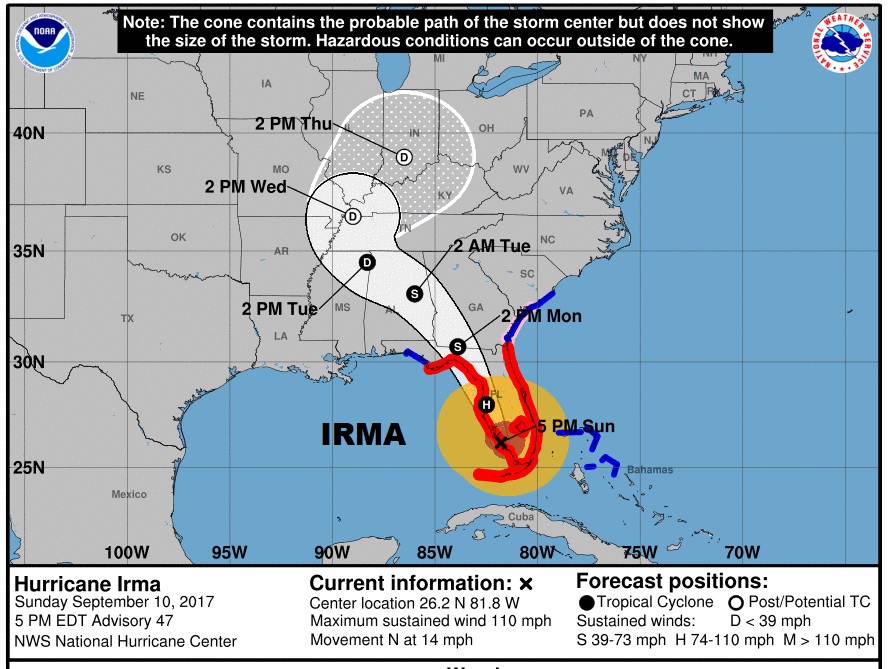 Close up of the NHC cone shows IRMA will still be a minimal Tropical Storm at 1AM Tuesday morning, just NW of Lake Martin. 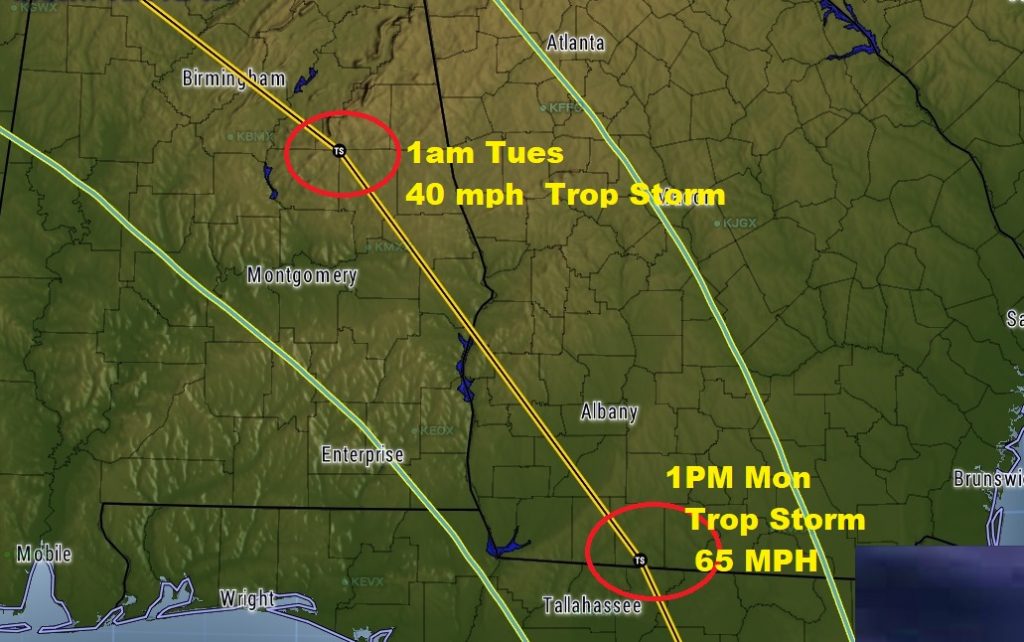 Make sure you have our weather App on your phone if you haven’t already downloaded it.  Watches and war nings will pop up automatically for your area as issued.  Plus hourly forecasts, current conditions, radar, and access to all my blog posts and videos, and a lot more.  Just search Rich Thomas Weather in the App store.

I will have another complete video and blog update for you tomorrow morning online by 4:45AM.   Stay weather aware.

Have a good evening.