A fresh supply of very cold air is funneling into the state, propelled by gusty winds, circulating around a monster east coast storm.  Our winds will increase today, as this new chuck of arctic air surges southward.  We’re headed for the teens tonight.   Friday morning could be at least as cold as Tuesday morning was.

TODAY:  Sunshine, but breezy and cold, today.  The high temperature will only make the upper 30’s at best.   But gusty north and NW winds 11-17 mph could gust above 20 by afternoon.  Hard Freeze Warning continues i8n effect tonight as we head for the upper teens in most areas, and perhaps a little colder in outlying areas.  That big east coast storm has exploded in intensity over the last 24 hours.  This is what we refer to as a “Bombogeneisis” in the business.  That happens when pressure inside the storm drops 24 milibars in 24 hours.  This storm will drop perhaps as much as 50 milibars!  There is a direct relationship with the pressure and wind.  The middle Atlantic coast and the northeast will not only be dealing with extremely heavy snow, but they are also in for close to hurricane force wind gusts in spots, causing blizzard conditions.  How does that effect us?  Look at the pressure lines on this map, called isobars.  When those lines are tightly “packed”, the winds increase.  It will be our wind-maker today. 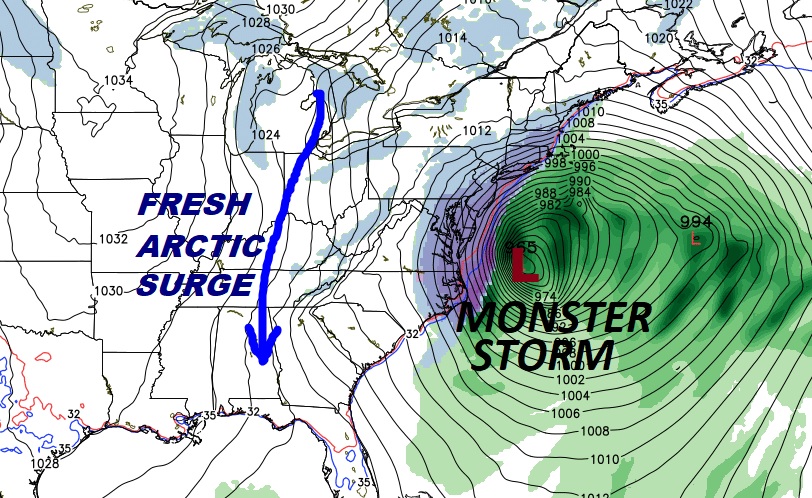 With lows tonight in the teens by morning, wind chill will be about 5 degrees lower. The frigid airmass will dip even down into central Florida, and it will grip much of the nation.  The Friday morning low in Orlando will be near 32. 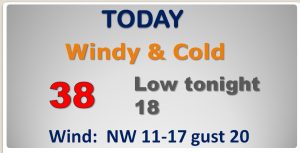 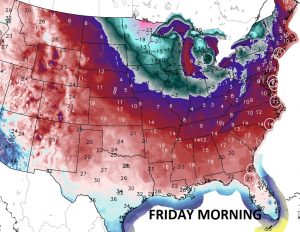 NEXT FEW DAYS:  Another Hard Freeze is in the cards Friday night/Saturday morning.  Friday will be very cold, but we will start to see some improvement over the weekend.  Saturday will not me quite as cold with mid 40’s and lower 50’s on Sunday sounds pretty good.  Showers return Sunday night & Monday, as the temperature skyrockets to near 60 Monday. 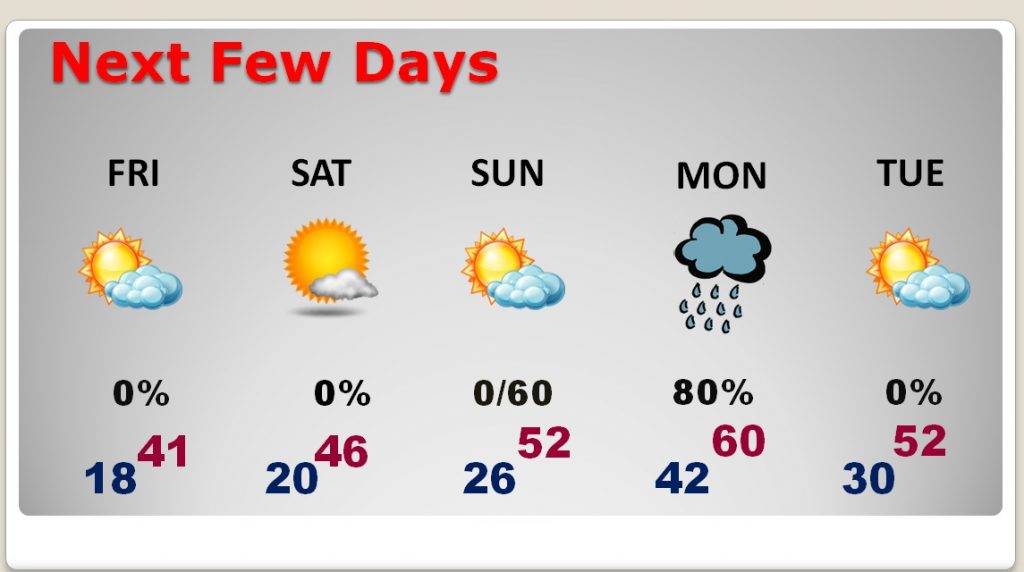 NEXT STORM SYSTEM:  As our pattern begins to change, and the arctic outbreak finally ends, showers will become likely Sunday night and especially through early Monday as the next frontal system sweeps across the area.  No severe weather is expected.   Rainfall for many of will average .5 to 1″. 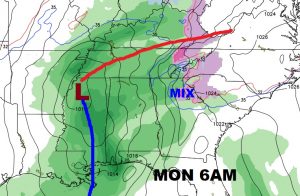 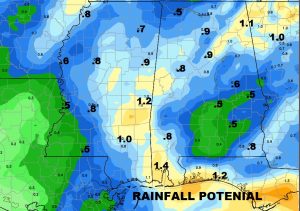 LOOKING AHEAD:  Finally, it looks like some nice temperature recovery, beginning and continuing through next week.  One model, the Euro, shows we’ll be near 70 late next week.  Now, there could be another “setback” before mid January…but in general, what I am seeing from mid to late month, is a nice, pronounced January Thaw! Stay tuned.. 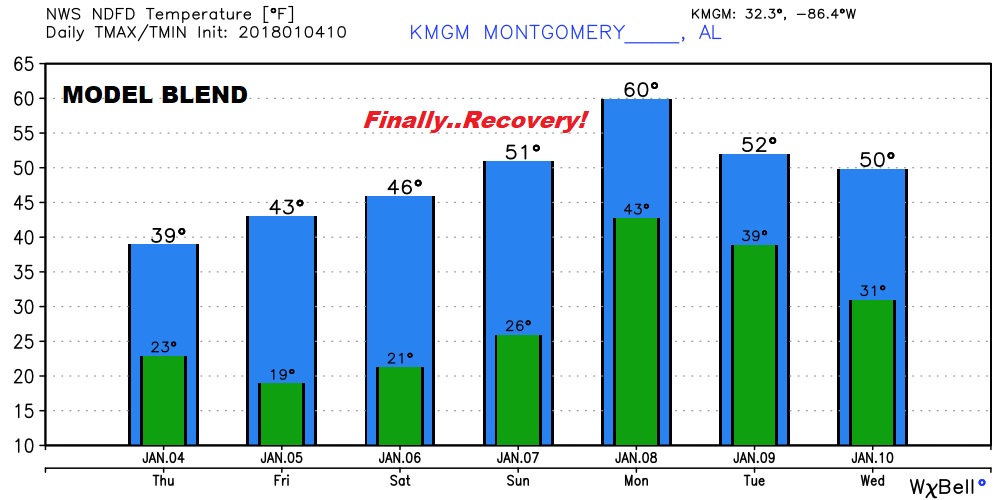 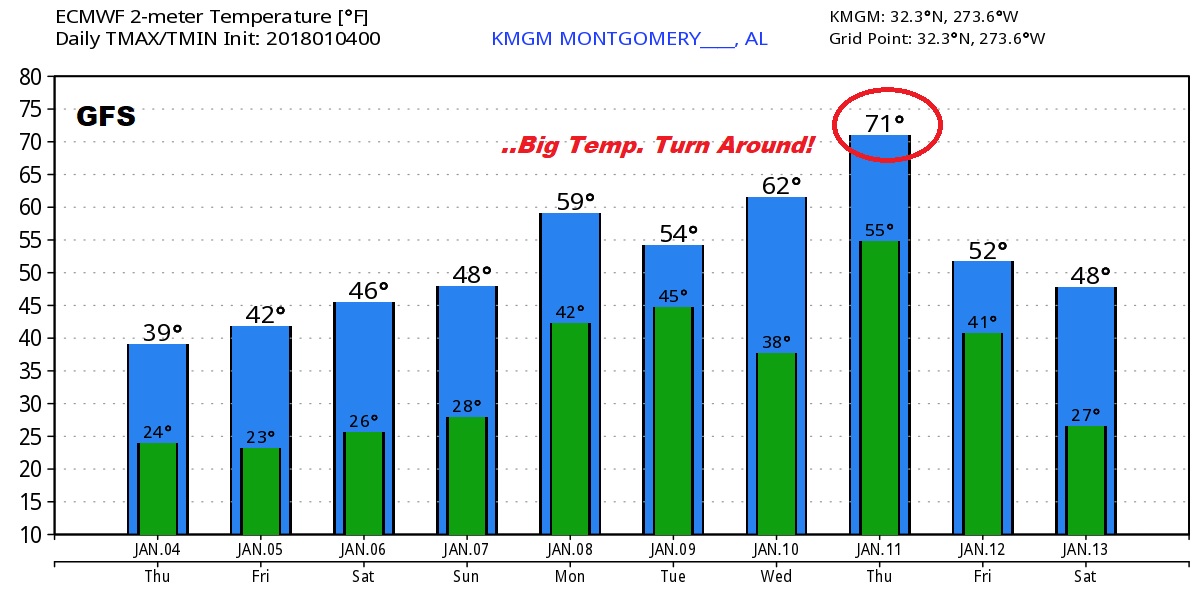 NO VIDEO TODAY.  I’m being treated for the FLU, and feeling pretty miserable.  I thought a BLOG update would be more appropriate.  There will be another one tomorrow morning, too.  Plus, of course, you will hear my forecast, across the dial, twice an hour on the entire 8 station Bluewater group.  I hope you and your family are healthy!  Get ready for this new arctic surge.  Stay warm!