Today will be a rather cool, brisk Fall day. This is just what the doctor ordered!  Highs will only reach the middle 60’s.   The last time we had a day with a high in the 60’s was 6 month ago on April 16th.  Tonight’s low will fall to the lower 40’s.  We haven’t been in the 40’s at night since April 30th.  This is the weather we have been dreaming about for so long.  The chill will start to fade a bit by Tuesday and Wednesday.  A late week Gulf storm system will bring showers back to the area.

Here’s the map just before Dawn.  One front has already made it south of the coast. A secondary front is following on the heals of the first one. 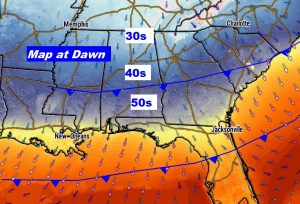 TODAY:  Cool sunshine will dominate.  A second, reinforcing cold front will sweep through.  Gusty northeast winds of 10 to 16 mph  will make today’s high of 65 feel cooler.  Tonight, the winds will die down. The chilliest night will be tonight with low 40’s in central Alabama and mid 40’s south.  Some north Alabama counties are under a frost advisory with some upper 30’s teasing the area tonight.

NEXT FEW DAYS:    After that chilly start on Monday morning, it should be a great fall days.  Highs will be in the low to mid 70’s Monday through Wednesday with lows at night in the 50’s.  That’s close to average for this time of year.  A decent chance of rain returns Thursday and Friday, as a Gulf storm system brushes by the area. 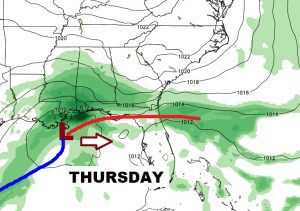 METEOR SHOWER:   The Orionid meteor shower will reach its peak on tonight. It’s one of the 3 or 4 best Meteor showers of the year.  Best viewing is after midnight. You’ll definitely need a jacket.   Get as far away from city light pollution as you can get.

Have a great Sunday! I will have you a complete video update Monday morning online by 4:45AM.