It’s the chilliest morning of the Fall season so far.  Some spots in central Alabama have fallen to the 30’s, with lower 40’s all the way down to the Florida border.  It will be a great Saturday, and  a nice Sunday.  There could be some showers by late Sunday afternoon/Sunday night into Monday.  But, some ominous changes are on the horizon.  There is increasing evidence that Alabama and adjoining states could see a significant severe weather threat late Monday night into Tuesday.  This particular storm system will have far reaching implications for much of the eastern Unites States on Election Day.  Details of this threat below.

TODAY:  After a cold start, we should see a text-book-perfect day today.  Cool sunshine will dominate.  High in the upper 60’s to around 70.  Mainly clear and chilly again tonight.  Overnight lows 43-46.

SUNDAY:  We will have a chilly start, but a comfortable day with a high in the lower 70’s.  An approaching weak front will increase the clouds.  A line of showers will crisscross the state.  There could be a late day shower, and the shower threat will last in through the evening.   Overnight low 58.

SEVERE WEATHER THREAT:  Monday will be very warm, with scattered showers and thunderstorms.  But, a developing low pressure system and potent front in the plains states will set the stage for what could be a significant severe weather/tornado threat for a large portion of Alabama and adjoining states, particularly by late Monday night, in the overnight hours, in through the first part of the day Tuesday.  The most significant threat window appears to be from, lets say, Midnight to 7AM.  NWS says “significant long-tracked tornadoes” are possible in this extremely potent set-up, particularly for the northwest ½ of Alabama.  Needless to say, the most disturbing part, involves the overnight hours when folks are sleeping.  It’s a dangerous set-up, to say the least.

Here’s the map at 6AM Tuesday morning. 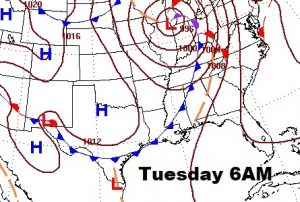 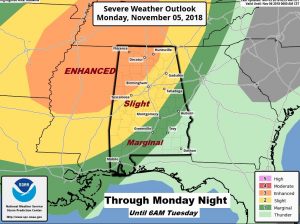 After 6AM Tuesday, the Day 4 SPC outlook shows much of east central and northeast Alabama in the Risk Area.  Keep in mind, these risk maps and risk levels will be updated between now and the event.  We’ll have new maps on tomorrow morning’s blog. 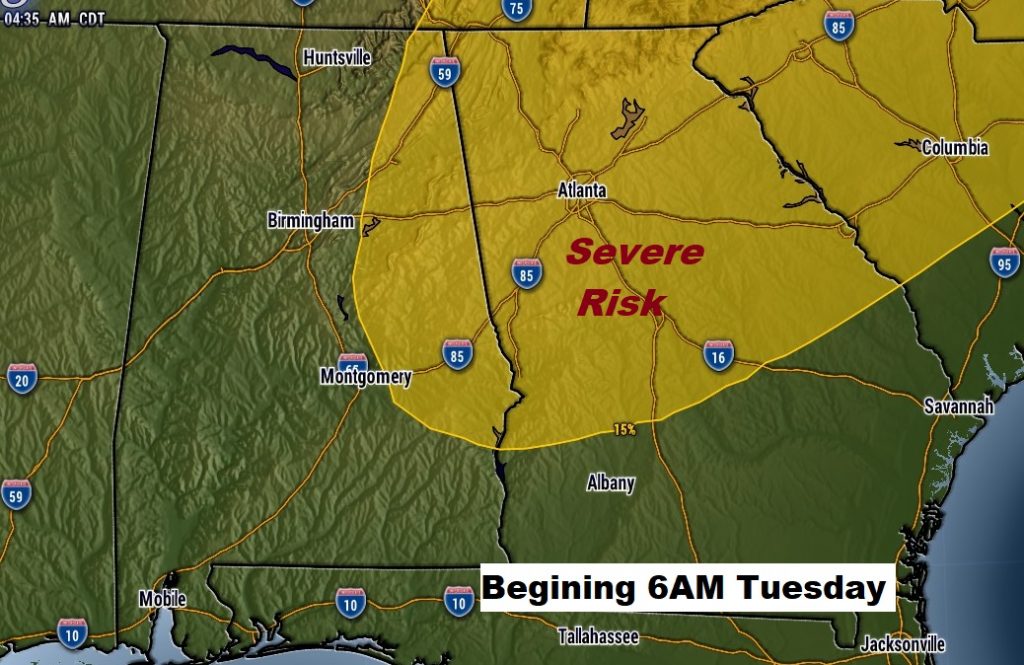 NEXT FEW DAYS:   Monday and Tuesday’s high will be near 80.  Very warm and humid.  Fuel for the fire for the severe weather threat Monday night into Tuesday.   Wednesday will be a little cooler, but secondary cold front Thursday will bring a chance of showers and cooler air. 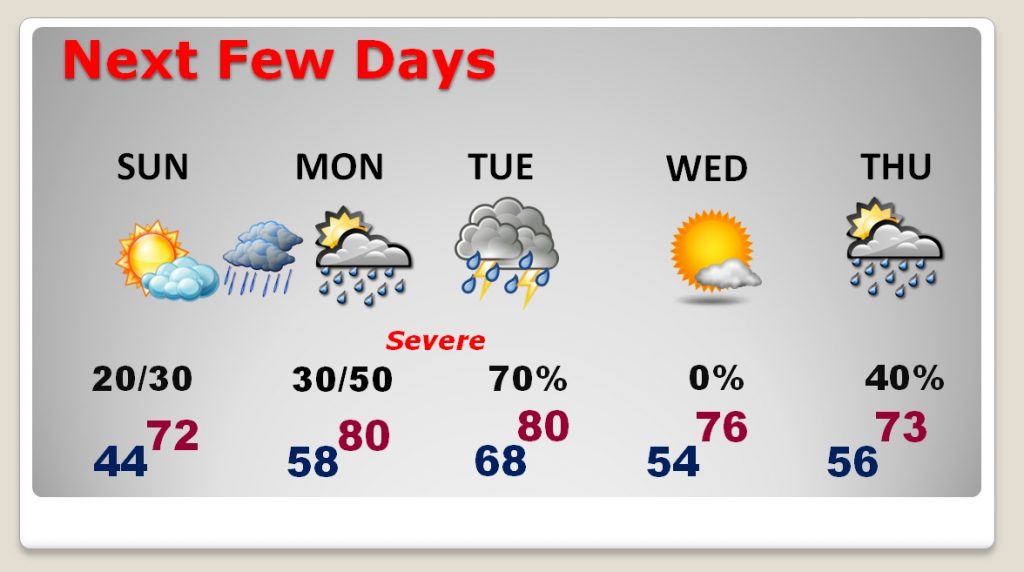 FALL BACK TONIGHT:  Don’t forget…set your clocks back tonight before you go to bed tonight.  We go back to standard time at 2AM Sunday.  We get an extra hour of sleep.

Have a nice Saturday! There will be another important blog update for you early Sunday morning, with an update on the impending severe threat.  I will have your next complete video update Monday morning online by 4:45AM.