Overnight, Southeast Alabama continued to get pounded by wave after wave of severe storms.  Today, rain chances will vary quite a bit from near 70% in Dothan to less than 20% northwest of Montgomery. The warmer air is still in place today, but two cold fronts are on the way.        Gradually, it will turn cooler tonight and Monday, and then colder Monday night through Mid week.  It looks like we will have a couple of mornings in the upper 20’s, again by mid week, as our temperature roller coaster continues.

Here’s the set-up at 6AM.  Do you see the two cold fronts in our future?   It will turn cooler then colder in stages over the next couple of days. 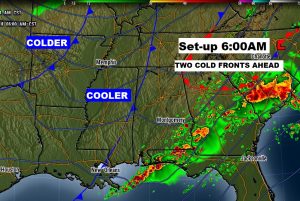 TODAY:  Your forecast today depends.  Here in central Alabama, the rain chances remain in the 20% range through mid-day.  But, Southeast Alabama the rain chance remains rather high, closer to 70%. 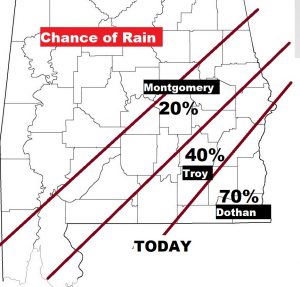 Clouds will hang tough here in central Alabama through the morning, but bright sunshine will likely break through by early afternoon. 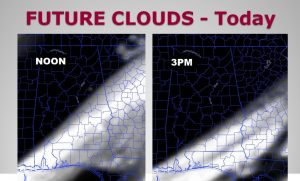 Highs will reach the mid 70’s again.  Cooler tonight…low in the lower 50’s.

Extreme Southeast Alabama still has a lingering severe weather threat today.  As I write this, a tornado watch continues for 5 counties until 10AM. 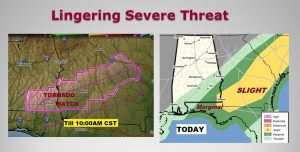 NEXT FEW DAYS (through Thursday):   We’ll still be in the 60’s Monday, but gradually colder and colder air will funnel in.  For instance, Tuesday will be chilly, with a low of 38 and a high of 53.  But, by Wednesday, it will be rather cold, with a low of 29, and a high in the upper 40’s.  The coldest morning will be Thursday.  We’re dry until Friday night when the next storm system affects us. 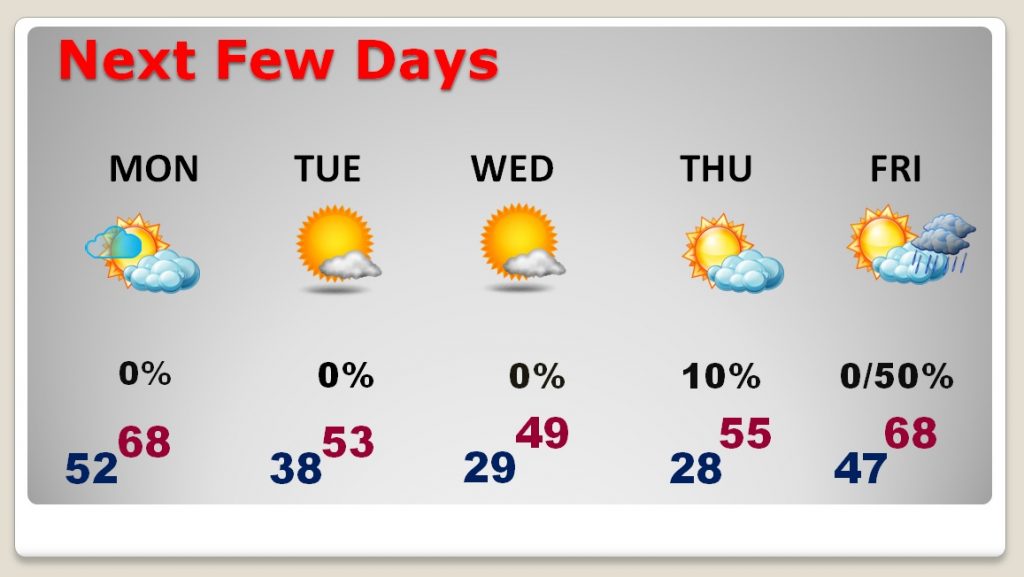 TEASER – NEXT STORM SYSTEM:  A rather dynamic storm system will begin to affect the state by Friday night into Saturday.  Rain and thunderstorms are expected in the warm sector, but this storm system will also produce snow and ice northwest and north of Alabama.  We’ll monitor the future model forecasts on how this system could affect the region as the week goes on. 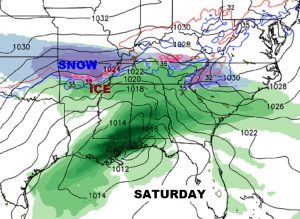 I will have you a complete video update Monday morning online by 4:45AM.  We’ll get deeper into the details of some more cold days and nights ahead this week.