Alabama is very soggy this morning.  Rivers and creeks are still running very high.  The stage is set for more rain over the next few days, as a series of storm systems affect the area.  Today’s rainfall amounts will be light. The Monday/Monday night storm system will involve thunderstorms, with heavier rainfall amounts.  But, the heaviest period of rain appears to be in the Wednesday/Thursday time frame.  It appears that sunshine will finally arrive, in abundance, along with colder temperatures, by next Friday, January 4th.

TODAY: Dense fog advisory until 9AM.  Like yesterday, rainfall will be rather light & spotty, with expected totals staying under ½ inch.  There will be many dry intervals.   It will be very mild, with a high near 67.  Tonight’s low 62.

MONDAY & MONDAY NIGHT:  Monday will be an unusually warm day.  Highs will reach the mid 70’s As a large storm system approaches the area, south winds could gust to 15-25 mph.  It’ll be mostly cloudy with a few sun-breaks.  Thunderstorms will become more likely Monday evening and.  Monday night, as a weakening squall line moves across the state.

Here’s the map set-up on Monday.  SPC says some storms could reach severe limits across west and NW Alabama Monday evening, but the line of storms will weaken as it moves east.  This storm system will have a massive negative affect on National air travel as it moves eastward.

NEXT FEW DAYS:  Following the Monday night storms, the risk of showers will continue on New Year’s Day, as the front stalls somewhere in central/south Alabama.  A wave of low pressure will move along the front Wednesday/Thursday with a surge of locally heavy rain.  FINALLY, a cold front moves through Thursday night with much cooler air.  Sunshine returns Friday. 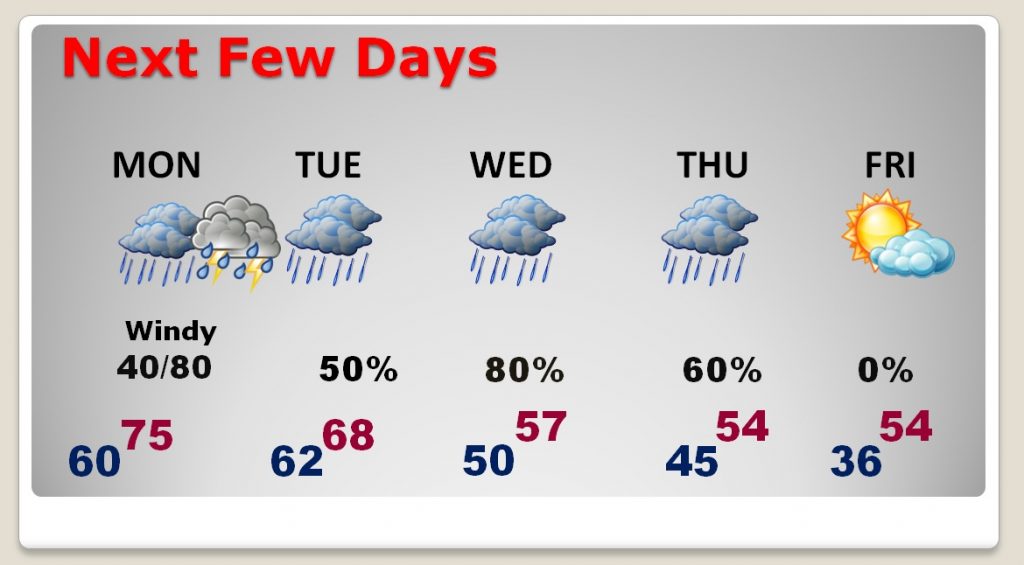 ADDITIONAL RAINFALL AMOUNTS:  The future rainfall expectations are a little more reasonable now, but still troubling.   Any additional rainfall will continue to exacerbate the already saturated grounds and the bank-full river and streams. 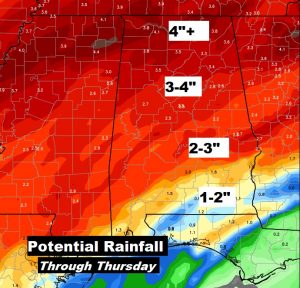 FLOOD WARNINGS:  The Alabama River at Montgomery and the Tallapoosa River just east of Montgomery will peak above flood stage today with minor flooding expected.  A flood warning also continues for the Catoma Creek.  Many other Alabama rivers and streams are under a flood warning.  For more information, click here.

Have a good Sunday!  I’ll have additional updates through New Years Day.