This Mother’s Day Weekend will be stormy at times, as waves of thunderstorms move through the state.  There will also be several hours of dry weather in between thunderstorm clusters.  Some storms will be strong, and a few could reach severe limits both today and Sunday.  In fact, Sunday may be the day with the stronger severe weather threat.   Here’s the map set-up this morning.  The frontal system west of Alabama will be the key player.  The front will move across the state on Sunday afternoon and out of the state by Sunday evening. 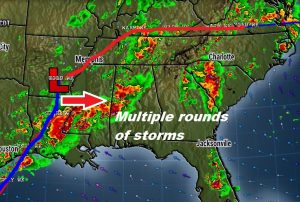 TODAY:  A couple of impulses will affect the state, one during the morning, and another thunderstorm complex will likely move across the state by later in the afternoon and into Saturday night.  All of the area is under a Marginal Severe Weather risk.  The threat ramps up during the afternoon, and continues tonight.  Damaging wind gusts are the primary threat.  High today 84.  Low tonight 70.

Here’s the latest threat may from SPC for today.  It is possible that parts of south Alabama may have to be upgraded to the level two (yellow) risk area later, depending on how the thunderstorm clusters evolve. 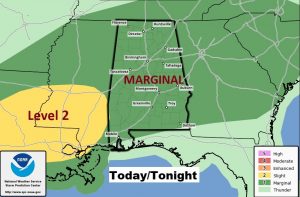 SUNDAY:   Action could begin very early on Mother’s Day.  The National Weather Service is talking about a possible severe weather threat window from about Dawn in the west to, perhaps,  3PM in the southeast counties. That’s a long window, and it could involve multiple clusters of storms, starting in the morning and continuing into the afternoon.  There will be a lull in between storm clusters, but putting a time window on “the lull” is difficult.  Because the front will be moving through the state Sunday, the severe weather dynamics will be a little better, especially across central and east central Alabama, where the storm prediction center has a Level 2 threat listed.  I suspect that the Level 2 threat area could be expanded.  Although damaging winds are the main threat Sunday, a spin up tornado or two is also not out of the question. 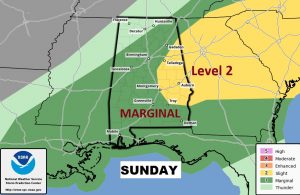 NEXT FEW DAYS:  After the storms depart Sunday evening, the stage is set for some really nice weather, as the new week begins.  Comfortable temperatures, lower humidity and blue skies will dominate much of the week ahead. 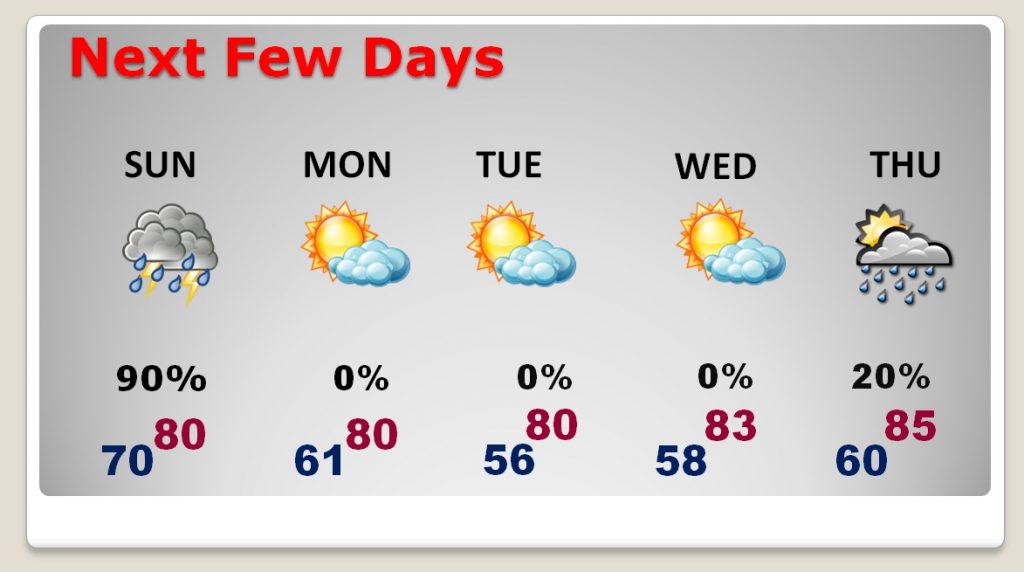 EXPECTED RAINFALL:   Some parts of the state could see some very heavy rainfall amounts over the weekend.  Up to 3 inches is possible in parts of north central Alabama.  For much of the state, the expected rainfall will be very beneficial. 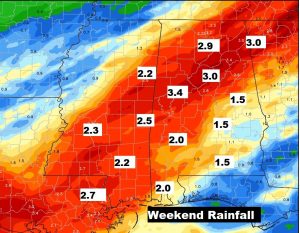 BEACH FORECAST:  If you’re at the beach this weekend, keep our weather app handy, so that you can track the storm clusters which will move through at times today, and especially tonight and Sunday.  Starting Monday, a series of beautiful days are on the way. 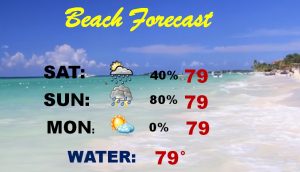 No doubt about it, I’ll be busy watching the radar for you all weekend.  Keep our weather app handy.  It will instantly alert you to watches and warnings for wherever you are.

I will have another Blog forecast update early on Sunday morning.  .  Stay weather aware this weekend.  Happy Mother’s Day to all the Moms out there!