There is no guarantee you will get wet today.  But, your chance of encountering a shower or storm is much better today.  Some of you will see more than one.  See future radar below.  After today, however, rain chances will be trending downward, and all signs point to rather intense heat, especially, starting Monday (July 1st) and through, at least,  the Fourth of July, and probably beyond.

TODAY:  Showers and thunderstorms will be in ample supply.  While the storms will still be random, the rain coverage will be the best it has been in a few days.  High in the low 90’s.  Low tonight 72.    Future radar paints the picture of a rather active storm day for central and south Alabama and the Gulf Coast beaches.

NEXT FEW DAYS:  Sunday, storms will not be as plentiful, as the temperature soars into the middle 90’s  We’ll be cruising close to the upper 90’s, at times in the week ahead, with triple digit heat indices.  Showers will be few and far between. 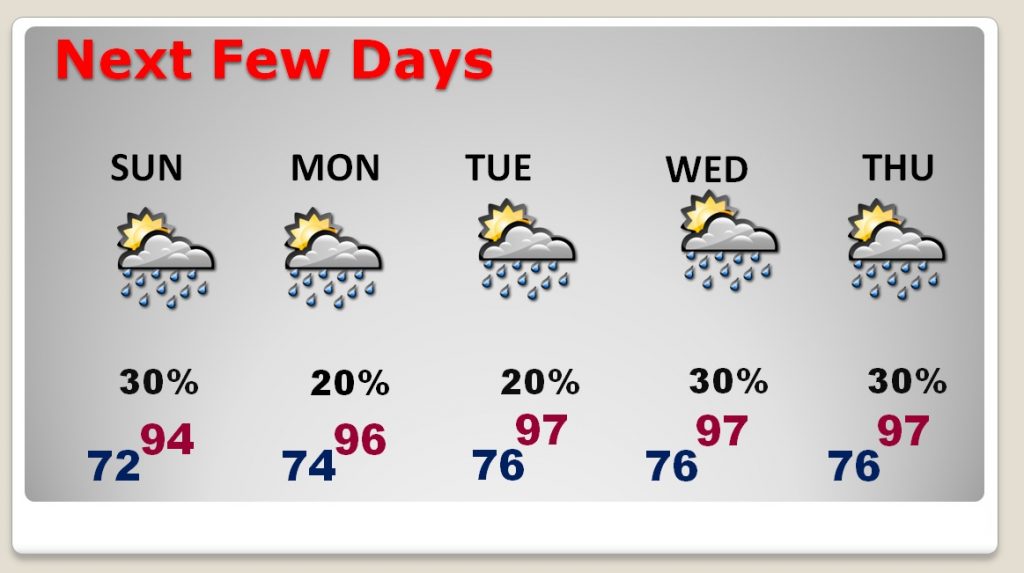 Another one of those massive Upper Heatwave Upper Highs will be in control during at least the first few days of July. 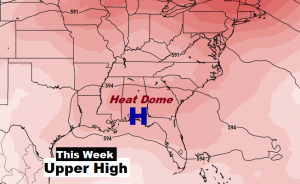 Not much commentary is needed for this map, which shows the potential Heat Index on the Fourth of July.   I’ll resist the temptation to say “hot as a firecracker” 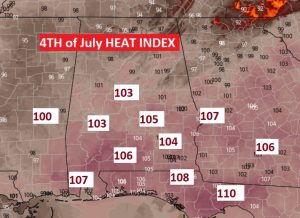 BEACH FORECAST:  Excellent chance you will encounter storms along the beach today.  That doesn’t mean it will rain all the time, but storms will be in ample supply.  Storms will be scattered on Sunday and Monday.  The Rip current risk from Gulf Shores to Pensacola is listed as low to moderate.  But, again today, in Walton and Bay county Florida, affecting Beaches from Destin to Panama City: “strong and frequent rip currents are possible”.  Pay attention to the Beach flags. 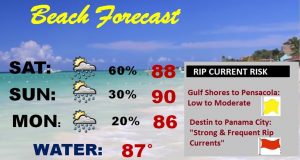 I will have another forecast update tomorrow morning.  Have a nice weekend.