The dangerous heat continues today. Yesterday, many towns reached the 105+ Danger level on the Heat Index.  We’ll be in that same neighborhood again today.  (and tomorrow..)  But, as you’ll see if you keep reading, our rain chances at least look promising by evening.  And, there’s some interesting tropical possibilities in the week ahead.  We’ll be watching the northern Gulf.

TODAY:  Extremely hot.  High 97.  Heat index near or above 105.  Radar will be become more active, as a disturbance in Tennessee dives southward.  Through mid afternoon, the best shower coverage will be over the northern half of the state.  But, by late afternoon and into the evening, the rain chances will get a lot better in central and south Alabama.  Good luck.  There’s certainly guarantee everyone will get a shower, but it’s the best chance we’ve seen in awhile.  Here’s just one future snapshot, from one model, around 6PM.  Be careful on area Lakes.  Watch for lightning.  Be ready to get to shore quickly. 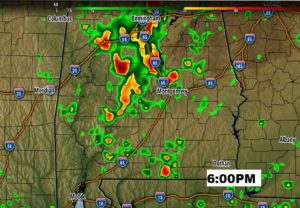 NEXT FEW DAYS:  As the Tennessee low migrates to the northern Gulf, our rain chance will be small early in the week.  But, rain chances get better late week as we watch possible tropical development in the northern Gulf.  Otherwise, very hot days will continue. 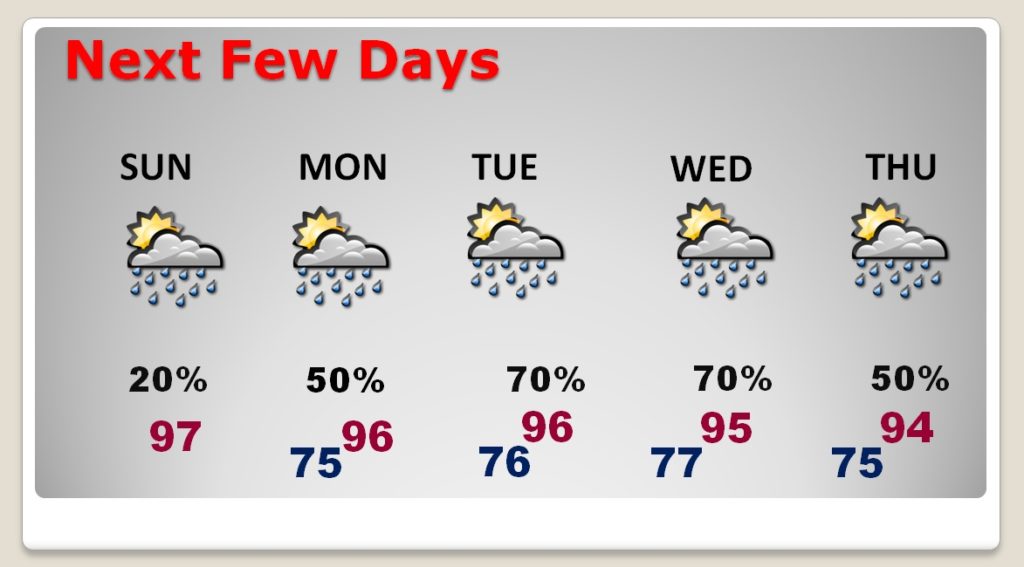 TROPICAL TROUBLE IN THE GULF LATE WEEK?:  It’s so strange to see the National Hurricane Center, place an “X” on the map over Tennessee, with an arrow pointing to possible development in the northern Gulf.  But, today’s Tennessee upper low, will migrate and evolve to more surface low, possibly acquiring tropical characteristics by late week.

7AM UPDATE:  NHC increases the odds of possible Gulf Tropical development to 40% next five days. 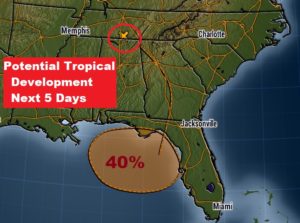 The EURO model continues to be the most bullish, and the most consistent.  It suggests a tropical low will develop in the northern Gulf, and perhaps reach Depression status by the weekend, heading for south Mississippi.  I have taken our rain chances higher.  How will this actually play out?  We have several days to watch it.

BEACH FORECAST:  There will be a few scattered storms roaming around today and the next 3 days.  The intense heat continues, with the heat index in the 105+ danger range. 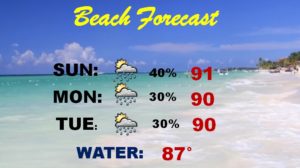 MONTGOMERY’S HOTTEST DAY EVER: 138 years ago, in 1881, Montgomery had it’s hottest day ever, reaching 107.  Back in those days, the official weather observations were taken at the Dexter Avenue Post Office.

But, do you remember August 2007?  During that month, we reached 106 three times!   Yet, we were unable to tie the all-time record.  By the way, during that scorching month, we were at 104 or above 8 times, and 100 or above fifteen times!  We were also in the middle of a terrible drought.

I’ll have a complete video update Monday morning, online by 4:45AM.  Have