Our remarkable string of very mild December days continues.  Today will be the fifth day of 70+ degree highs.  Not bad in late December!

You could run into a brief showers or two today, but the Main Event will be a rather impressive Sunday storm system which will bring in a round of showers & storms Sunday, and even more likely Sunday night.  Below, I’ll update you on the Severe Weather Threat with this system.  Then, get ready for some MUCH cooler air behind the storm system.  But, actually, the cooler air that follows will be closer to normal for this time of year.

TODAY:   It will be mostly cloudy, but the warm pattern continues. I can’t rule out a few peeks of sunshine.  I expect a high in the lower 70’s again.  Spotty showers will be roaming around.  Your chances of seeing one are about 20-30% daytime and 30-40% tonight.  Very mild tonight.  Low 64.

Here’s a Future Radar snapshot for late this afternoon, just to instill the idea that the showers will be very isolated in nature. 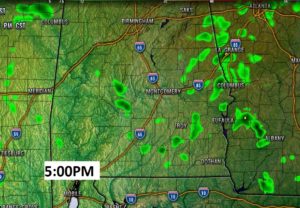 SUNDAY STORM SYSTEM:    All of the state is in a Marginal Severe Risk on Sunday.  Having said that, the area from I-65 westward has the highest odds of seeing a few severe thunderstorms, with damaging wind gusts.  Tornadoes can’t be ruled out.  During Sunday afternoon from 1 to 6, the western half of the state could see a few supercells thunderstorms develop.  Some could become severe.  Rotating storms could drop a tornado or two.  Later, Sunday evening and night, a “squall line” will swing through the state.  Again, damaging wind gusts to 60+ mph are possible and tornadoes can’t be ruled out. By about Midnight, the threat should have diminished.   Here’s the Sunday set-up, and the Marginal Severe Threat Map from SPC.  This storm will also bring a variety of Winter Weather in the Plains, Midwest, and Great Lakes.  That could have a major impact on Holiday travel. 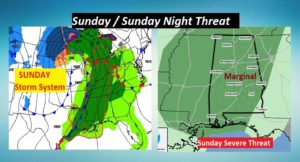 NEXT FEW DAYS:  Following the Sunday storm system, expect  a big temperature drop to close out the year.  Highs will fall to the 50’s.  We’ll be in the 30’s Monday night. I have now added a tiny rain chance late New Years Eve night after Midnight and about a 40% New Years Day.    Next storm system will begin to affect the area by Thursday and Friday..January 2nd, and 3rd. 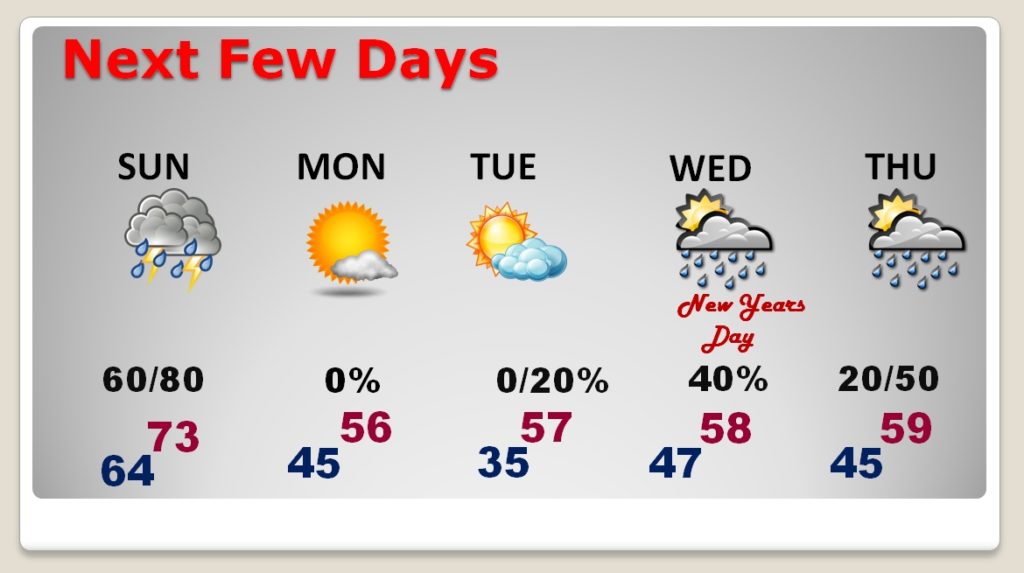 BAILEY IS HOME NOW:  I took my dog Bailey home from ICU at Carriage Hills Hospital yesterday.  She’s glad to be home and I am so thrilled she is beside me on our couch.  I am going to continue to keep her comfortable, and  as happy as possible over the coming days.  She’s a good little girl, and we’ll deal with one day at a time.  Here’s a snapshot just before we left ICU yesterday.   Thanks again for all your kind messages.  I’ll do my best to take care of her. 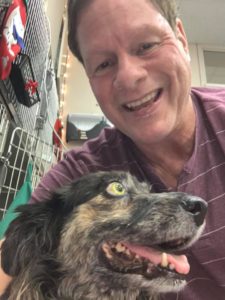 Have a nice weekend!   I’ll have another Blog Update in the morning.