Welcome to February!  As I type this before Dawn, there are a few showers on radar in the state.  The chance of you encountering a shower this are small, but not zero.  But, in general, today will be quiet.  Cloudy & mild.  Not a bad day.

The week ahead, begins warm.  We’ll be in the 70’s Monday through Wednesday.  The risk of showers begins Monday night.  The rain threat will be in the forecast much of the week into Thursday.

But, at the moment I am most concerned about a potential Severe Weather Threat on Wednesday.  More on that below.

SUPER BOWL SUNDAY:  You just could not write a better Sunday script.  I think it will be picture postcard perfect, with high pressure in control.  Sunshine will dominate.  After the morning chill, afternoon highs will soar into the mid to upper 60’s.  Enjoy!  Great day to grill out for the game. 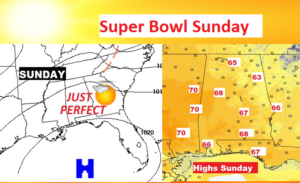 NEXT FEW DAYS:    The Warming Trend continues Monday.  Monday should be a dry day with a high near 70.  Showers could show up as early as Monday night.  Periods of showers will dominate Tuesday.  Risk of strong to severe storms Wednesday.  More showers Thursday, as a cold front moves through the state.  Sharply cooler Friday. 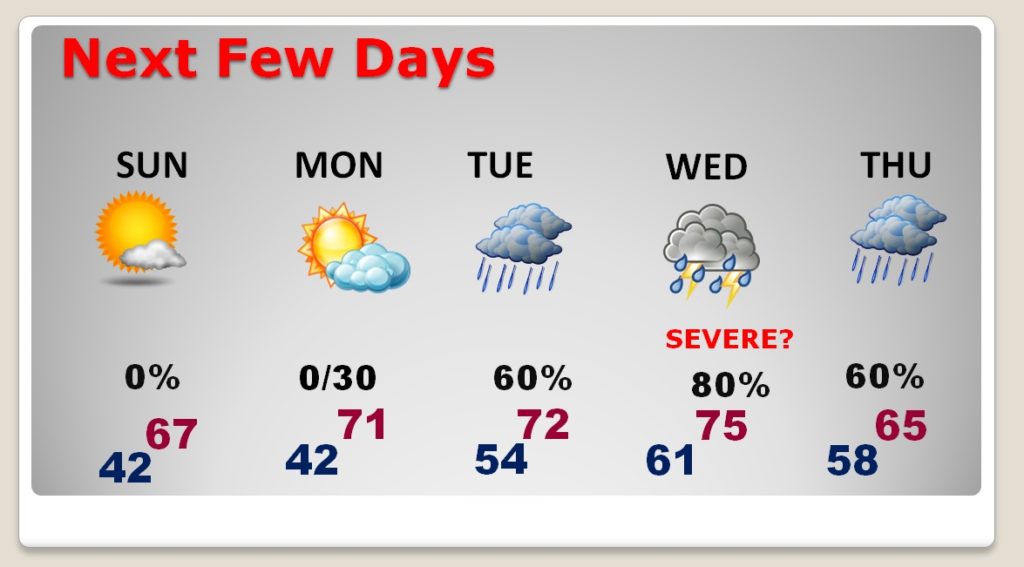 WEDNESDAY SEVERE THREAT:    We are five days away from what looks like a potential  severe weather risk in the state.  It is always significant when the Storm Prediction Center identifies a threat like this, six days ahead.  (They outlined the Wednesday threat as early as Friday)   It’s simply too early to try to speculate too much on the details.  Rich Gulf Moisture will be in place. Temperatures in the 70’s.  Dewpoints in the 60’s.  Waves of low pressure moving along an approaching front.  It appears to be a prime set-up. The afternoon and evening would be primetime, based on current model data, but that could change.   All modes of severe weather will be on the table, including the threat for tornadoes.  Details will become clearer each day we get closer.  ‘Tis the season.\ 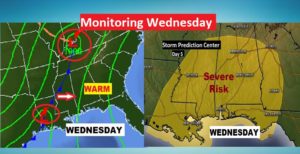 I’ll have another Blog update for you in the morning.  Have a great Super Bowl weekend.  ATTENTION ALL GROUND HOGS:  You must report to work tomorrow morning by Dawn!