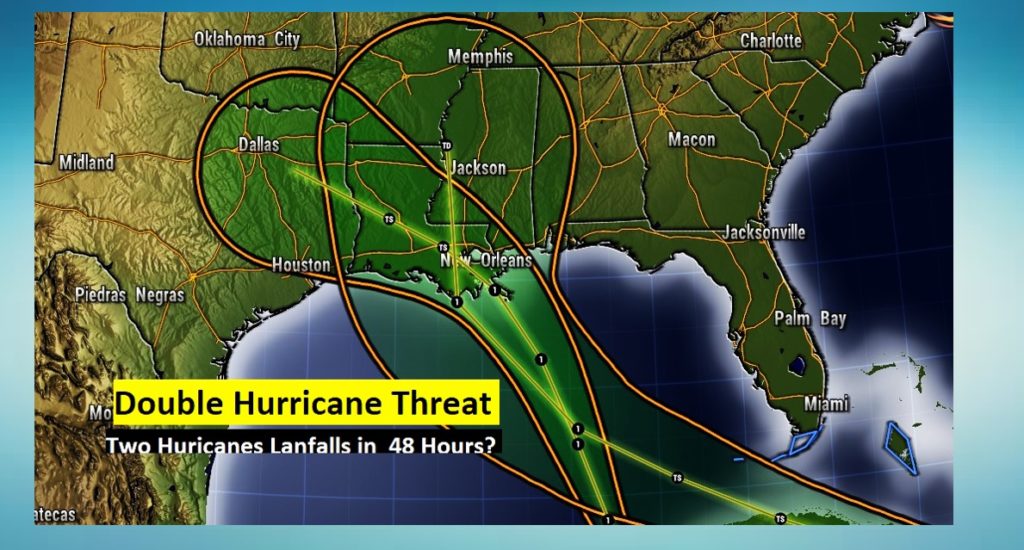 10:00AM NHC UPDATE:
Marco strengthening quickly. Now a 65 mph tropical storm nearing the Yucatan channel, moving NNW at 12. Expected to become a Hurricane in the Gulf next 24 hours. It will rake the Louisiana coast Monday night/Tuesday, 48 hours ahead of a Hurricane Laura landfall.  Watches may be issued later today for portions of the NW Gulf coast. 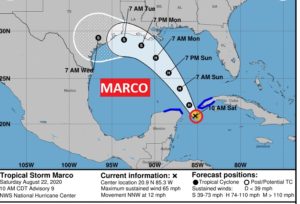 Laura is a minimal Tropical Storm with 40 mph winds 30 miles from Ponce, Puerto Rico. It’s expected to move over portions of Hispaniola and Cuba before entering the Gulf Monday night. Expected to become a Cat 1 hurricane and make landfall Wed. or Wed Night on the Louisiana coast. 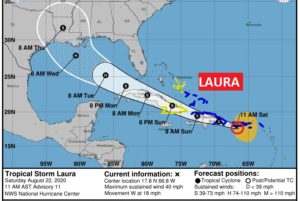 Good morning!  First, some encouraging news which may lower our tropical stress level.  The Laura threat for Alabama has eased quite a bit.  The NHC forecast “cone of uncertainty” now barely nicks coastal Alabama.  While this is great news for us, we still need to monitor Laura’s track carefully.

But, the news continues terrible for the United States Gulf coast this week.  We may indeed have a landfalling Hurricane and a Tropical storm within 48 hours, possibly affecting Louisiana and Texas in a very bad way.  (During a pandemic..)  This Double Tropical Threat is rare and historic.  We’ll continue to stay on top of the details as Marco and Laura head toward the Gulf.  Details below.

Meanwhile, it’s been a rather stormy night in Alabama.  We’re you awakened by thunder?  I have your updated forecast today through Thursday.  FIRST, the tropics…

TROPICAL STORM LAURA: (4:00AM) Laura is currently affecting the eastern part of Puerto Rico and the Virgin Islands.  Winds now 40 mph, moving WNW at 21 mph.  Forecast track takes the storm over Hispaniola and Cuba, which will hinder development, but over the warm waters of the Gulf with very low shear, Laura is expected to become a Cat 1 hurricane, before potential Louisiana landfall Wednesday night or early Thursday.  NHC says, “little or no interaction with Marco is indicated at this time”.  The cone now barely nicks the Alabama Gulf coast. 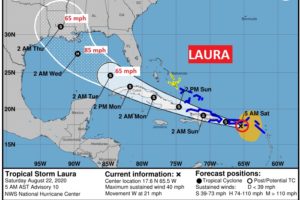 TROPICAL STORM MARCO: (4:00AM)  Marco is not far off the Yucatan coast, 115 miles ESE of Cozumel, moving NNW at 12 mph.  Winds 45 mph.  Marco won’t really start intensifying much until it gets over the warm Gulf.  The official NHC forecast now holds this system below hurricane intensity, even though a couple of models still indicate hurricane intensity is possible.  NHC says, “little or no interaction with Laura is indicated at this time”.  Marco could make landfall on the upper Texas coast late Tuesday night or early Wednesday.  It will slowdown in the last 36 hours, and that spells flooding rainfall for Texas and Louisiana. 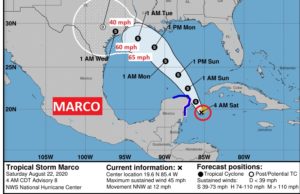 TODAY:   Sun / cloud mix today.  High near 90.  There will be a generous supply of random showers and storms, anytime, but particularly numerous in the afternoon and evening.  Low tonight 70. 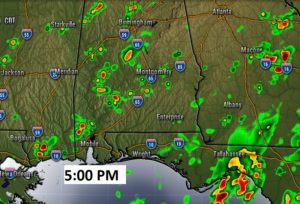 NEXT FEW DAYS:   Scattered storms Sunday and Monday.  Rain chances spike Tuesday and Wednesday.  Hopefully, we’ll be far enough east of Laura’s potential tornado threat.  We’ll have to refine that forecast with time.  But, the 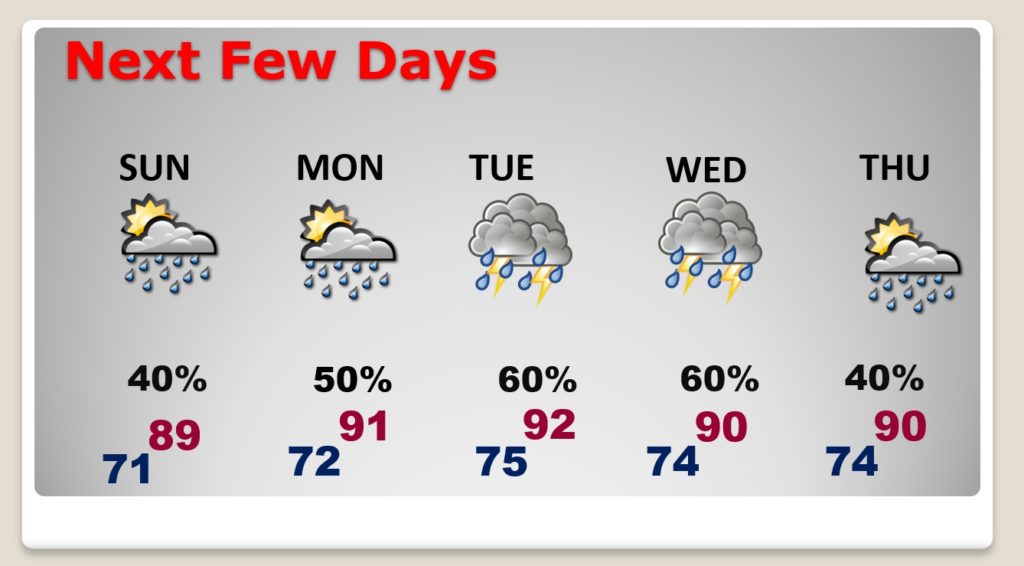 BEACH FORECAST:  Not a good forecast.  Scattered showers and storms will be scattered to numerous through Monday.  Yellow flags today.  Red flags Sunday and Monday. 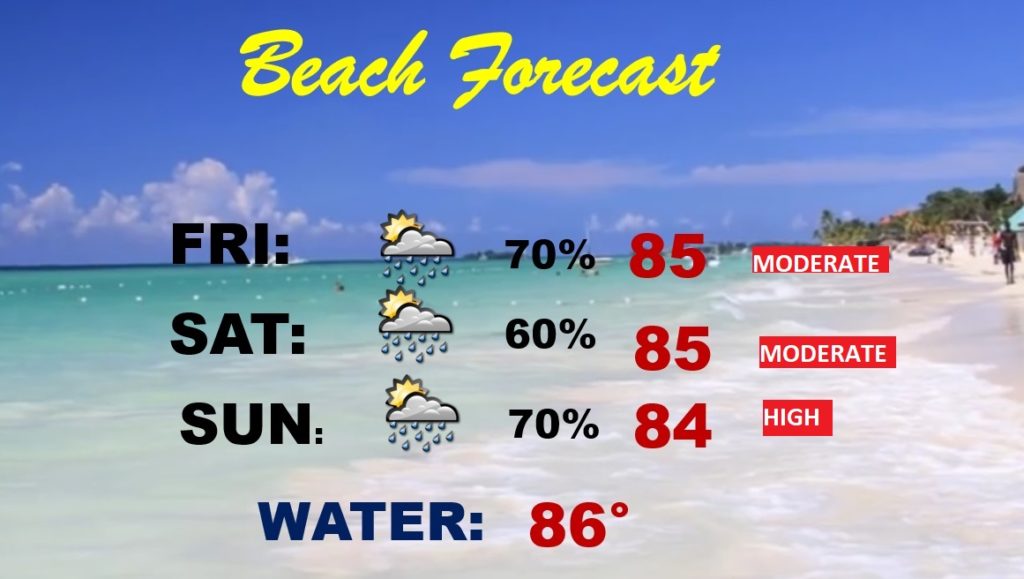 ELSEWHERE IN THE TROPICS:  NHC is still tracking that Area to Watch off the African coast.  It now gives it a low chance of development in  the next 5 days.  We’ll watch it. 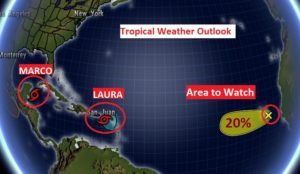