It’s a pretty routine summer weekend forecast, on this Father’s Day weekend. There will more clouds than sun, but enough sun to get us to around 90° both days.  Scattered random “pop up” storms will be around, just about any time, especially afternoon & evening.  Storms could be a little stronger beginning late Sunday in through Monday as a front approaches. And, the tropics are getting more active, including our backyard, the Gulf.  Below, I’ll explain why I’m not too worried.

NEXT FEW DAYS:  Much of the time you’ll be dry, but random storms could affect your outdoor plans at times.  Be flexible, have a plan B.  Our weather App will help you.  Radar and Future radar will show you where the storms will be, which way they are moving.  You will be able to see the lightning strikes, too. If a warning is issued, you’ll get push notifications. 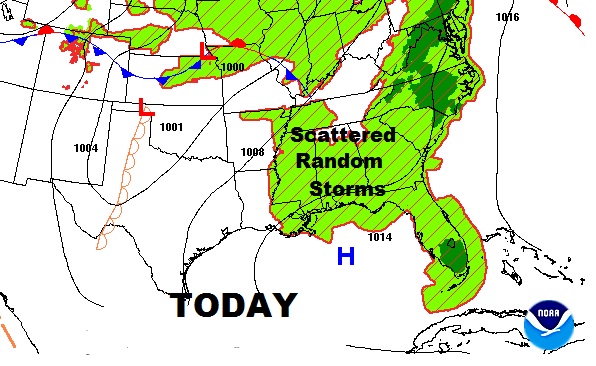 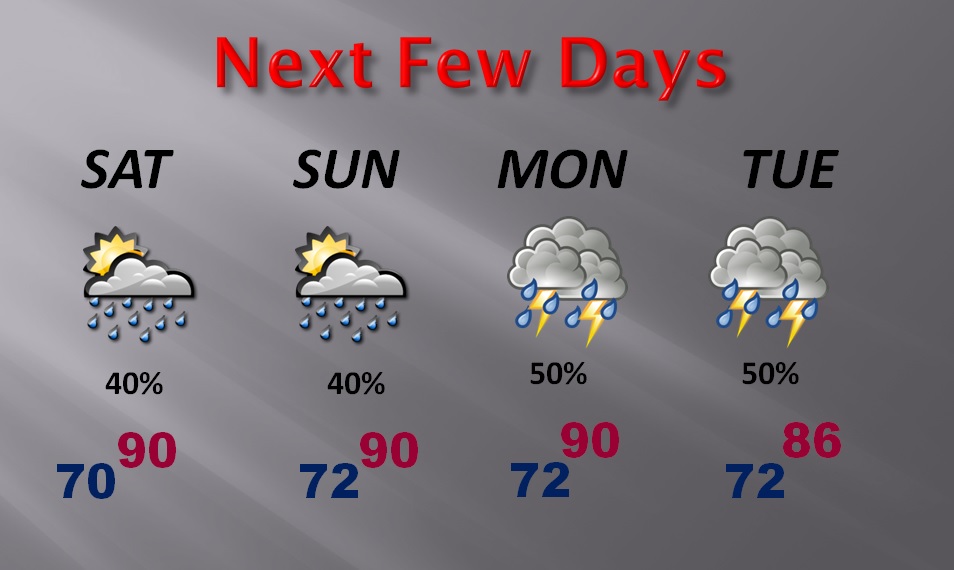 SEVERE THREAT?  Storm Prediction Center has placed a large part of the state in a Marginal Severe Risk on Sunday and Monday, especially the northern half of the state. 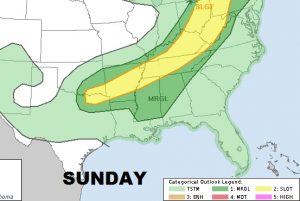 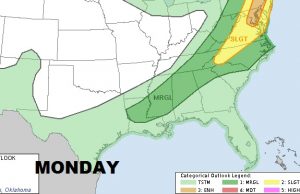 TROPICAL UPDATE:  The morning outlook from National Hurricane Center shows most of the Gulf covered in hash lines for possible tropical development…a 60% chance next few days. I’ll get into the forecast scenario in a moment.  The other area in the Atlantic  has a 70% chance.  It has a number, designated Invest 92-L. 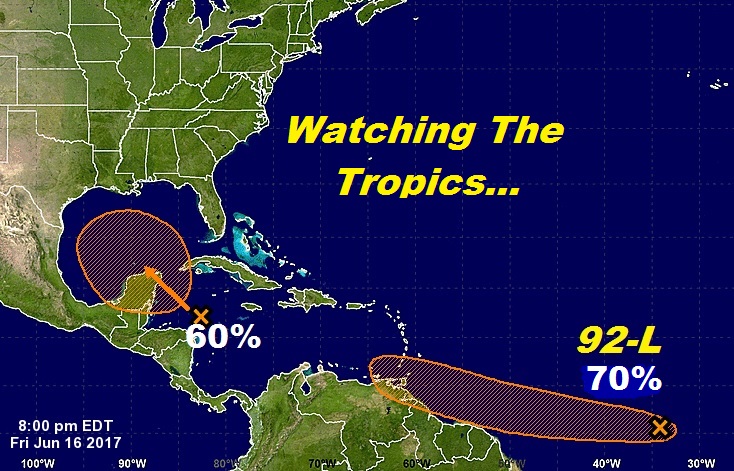 GULF DEVELOPMENT?  First, let me say this.  Wind shear, which is the worst enemy of a tropical system, is on our side.  I think shear will keep this system from becoming a hurricane.  It will likely stay on the weak side.  So where would it go?  Good question.  Three global models have 3 different solutions.  The American GFS and the Canadian CMC like the idea of development in the central Gulf, then moving in the direction of the Florida Panhandle around Tuesday.  The highly respected Euro model (ECMWF) like the idea of southwest Gulf development and heading towards Texas…also weak.  I like that idea, because the pressures seem to be lower in the western Gulf.  Stay tuned.  We’ll watch.  Wind shear is our best friend this time around.  Here’s a snapshot of all 3 global models at 1PM Tuesday.  CMC is strongest on intensity. 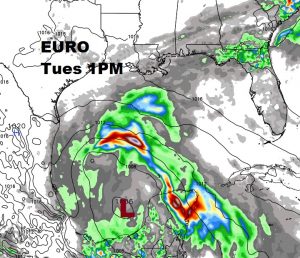 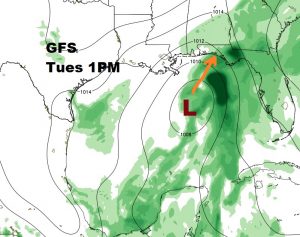 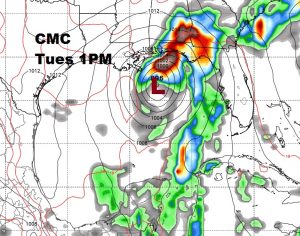 Early morning satellite view from the new Goes-16 satellite shows the disturbed weather approaching to the Yucatan this morning. 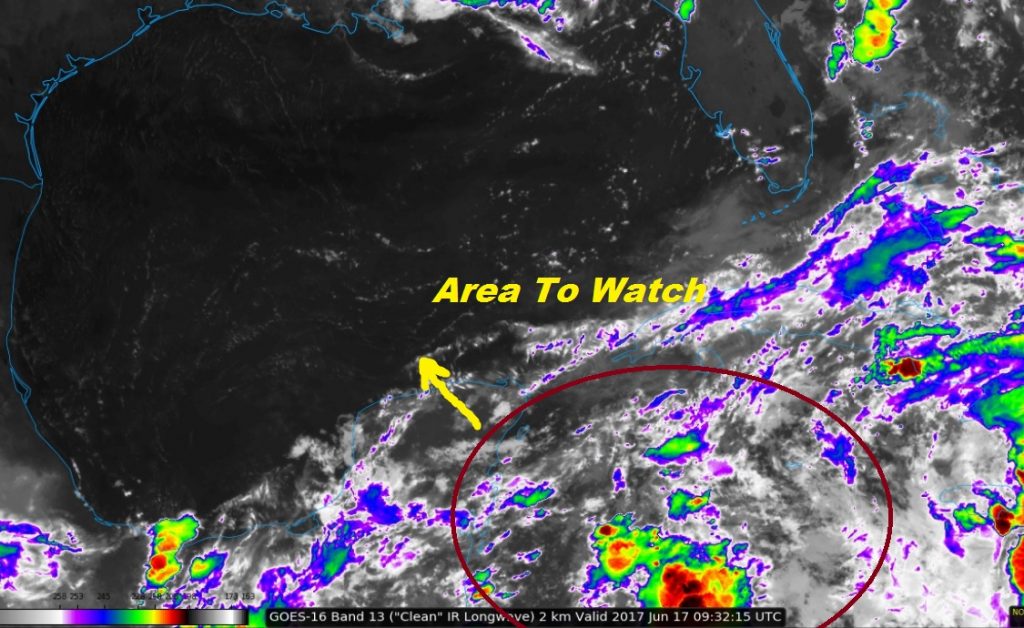 INVEST 92-L:  The system is in the tropical Atlantic.  Here’s what NHC says about this system and it’s future:

A tropical wave located about 1600 miles east-southeast of the southern Windward Islands is producing scattered showers and thunderstorms.  This disturbance continues to show signs of organization, and some additional development is possible during the next couple of days before conditions become less favorable for tropical cyclone formation. This system is expected to continue moving toward the west at 15 to 20 mph over the tropical Atlantic during the next several days. 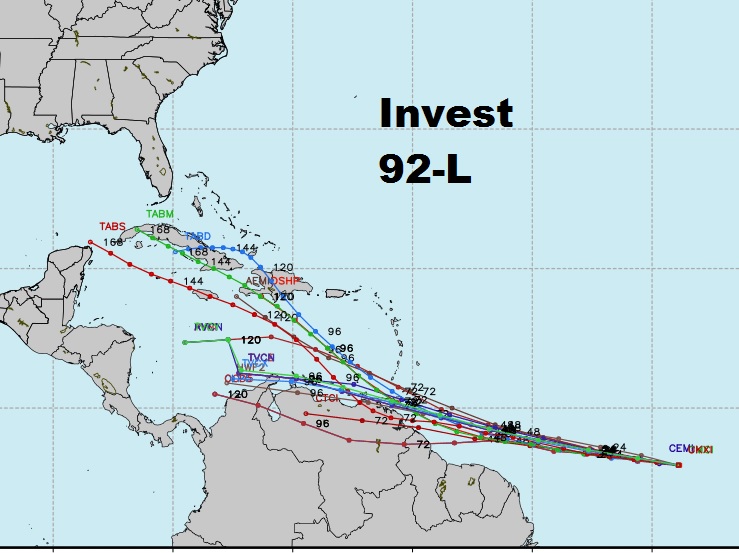 Happy Father’s Day to all the Dads out there!   Have a nice weekend.  I’ll keep you up to date on any significant forecast changes.