Following one of the wettest June’s in many years, which brought some of us near or over a foot of rain (Montgomery Airport 12.04”), the new month of July is starting off on wet note.  Showers and storms will be numerous across the area again.  Some storms could produce locally heavy rainfall amounts, again.  Yesterday many spots had more than an inch, some places had over 2”.  It’s feast or famine.  Some towns could get at lot, others not as much.

SEVERE RISK:  It’s possible that some storms could reach severe limits especially by mid to late afternoon into the evening hours, aided by peak heating.  Damaging wind gusts are the main threat.  The severe risk is highest across northern and north central Alabama, with a Marginal Risk further south.   Our Weather App will alert you to warnings for your area instantly. 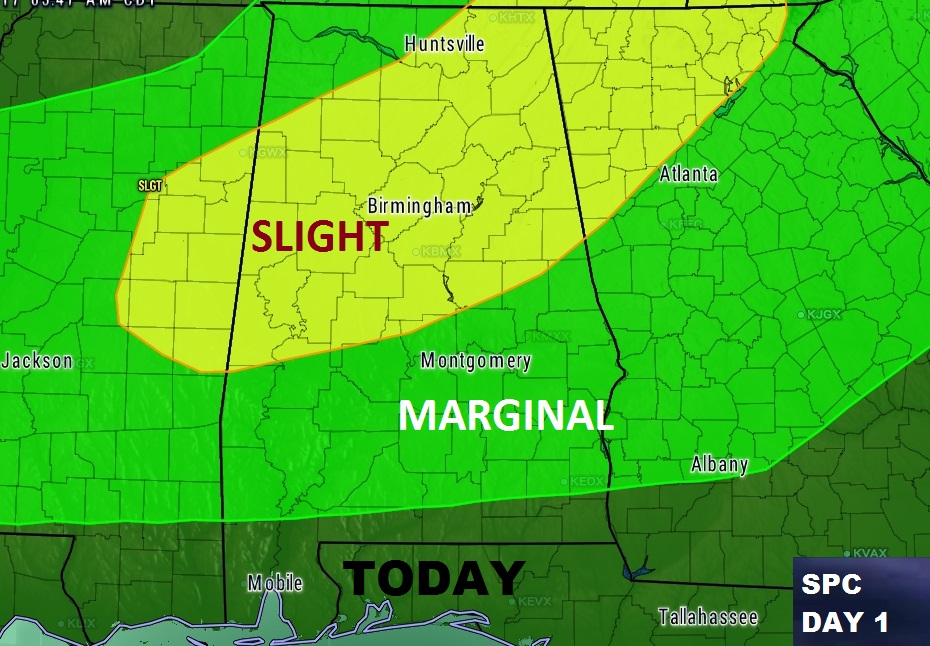 RAINFALL COVERAGE?:  That’s always a tough call on every summer day.  Yesterday…coverage on the radar was “dense”.  Storms were numerous.  I expect that to be the scenario again today.  I looked at several Future Radar models for this post, and opted not to show them here.  The Future Radar models have performed poorly lately, and I don’t want to send the wrong message.  So, let me broad-brush the general idea on coverage with this map.  It indicates a letter better chance across the northern counties where there is a flash flood watch, and perhaps less dense coverage across the southern counties.  Outside of shower areas, there will be a good bit of sun around and lots of dry weather in between the storm clusters. 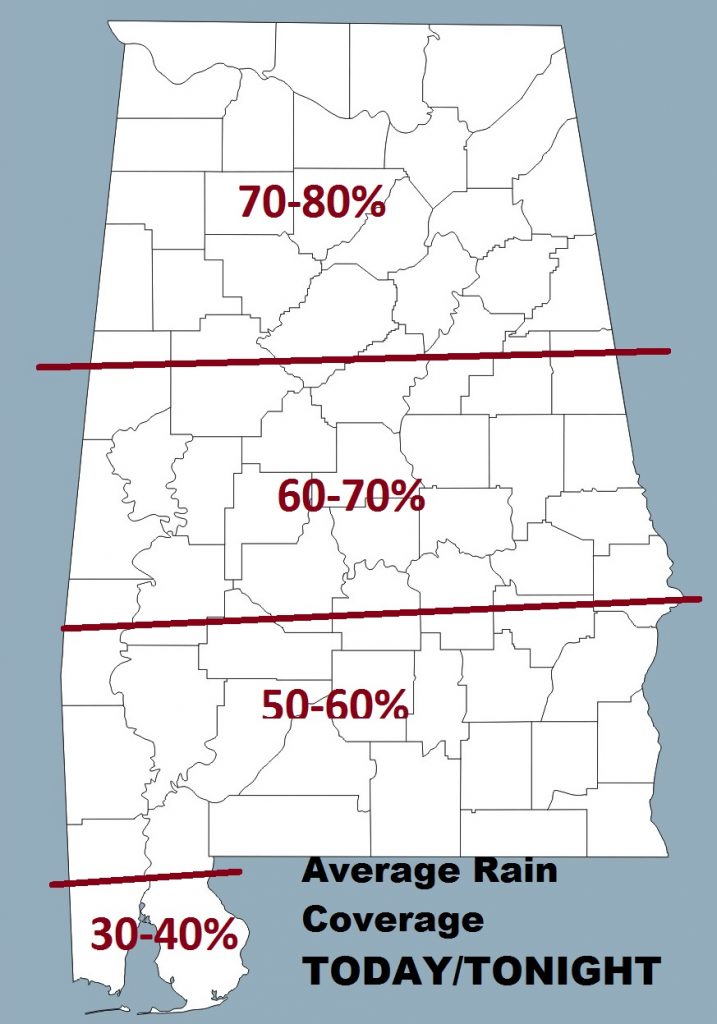 REST OF THE HOLIDAY WEEKEND:           Showers and storms will still be in ample supply on Sunday..but of course they will be hit or miss.  On Monday and the 4th of July, the number of storms will thin out a little bit, as temperatures soar into the low 90’s.  It’s a text book 4th of July forecast. 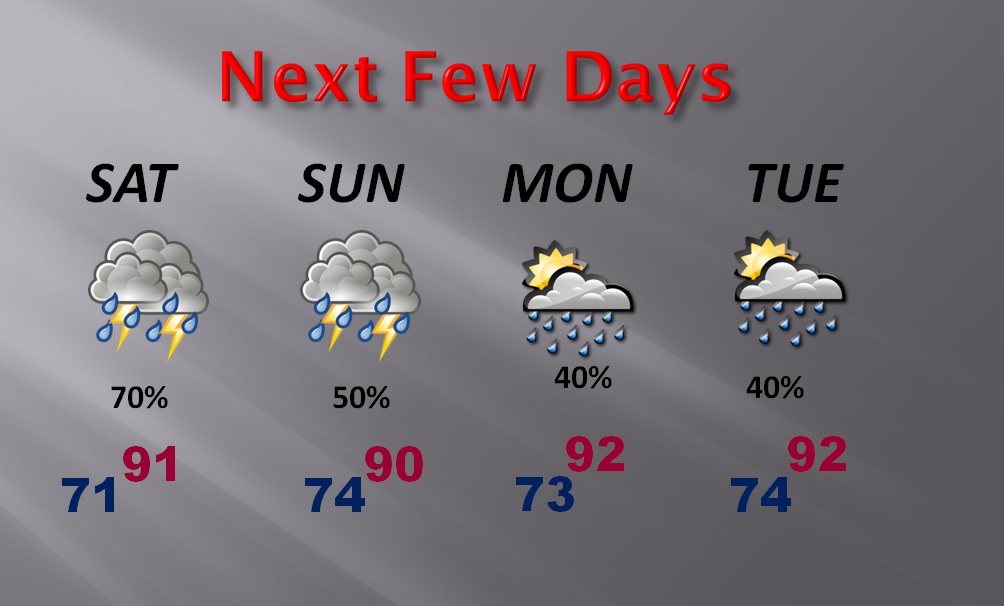 BEACH FORECAST:  Good news.  The Beach forecast has actually gotten a bite better for the rest of the weekend and through the 4th of July.  Random storms will be around but not nearly as numerous as they have been lately.  Highs in the upper 80’s.  Gulf water temp at the buoy south of Orange Beach is 83.  Southeast winds 5-10 knots, seas 1-2 feet.  Rip current risk is listed as Low, but please consult the flags on each beach.  A Montgomery man drowned at Gulf Shores yesterday. 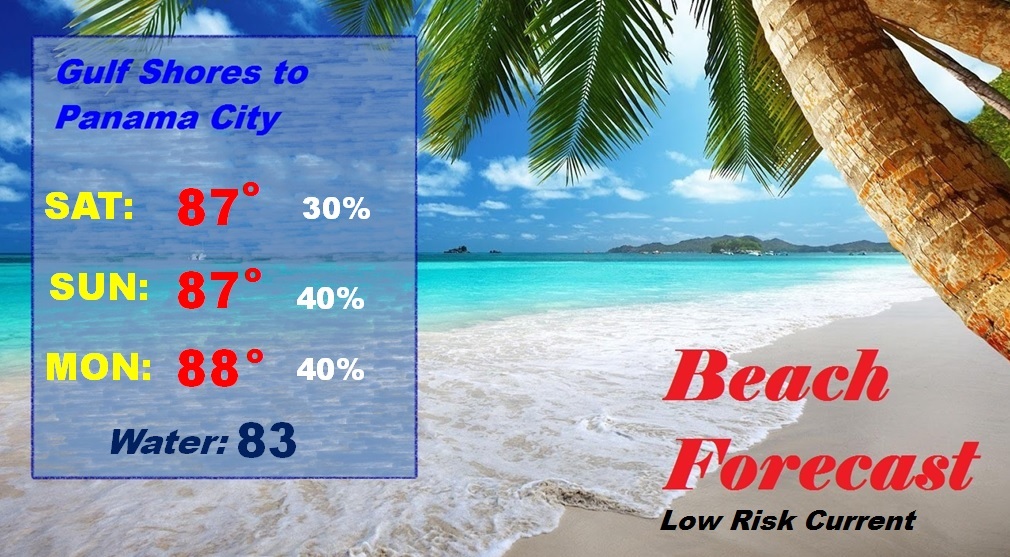 Have a nice 4th of July weekend.  Stay weather alert with our Weather App – which has radar and future radar, plus push notifications for watches and warnings.