Irma has been getting stronger since early this morning. Earlier today, Irma became the strongest hurricane ever in the Atlantic basin, outside of the Caribbean and Gulf of Mexico.  Winds are at 185 mph, moving west at 15, headed for the Windward Islands tonight and then the Virgin Islands and Puerto Rico, then into the Turks and the Bahamas after that where Irma’s effects could be absolutely catastrophic. 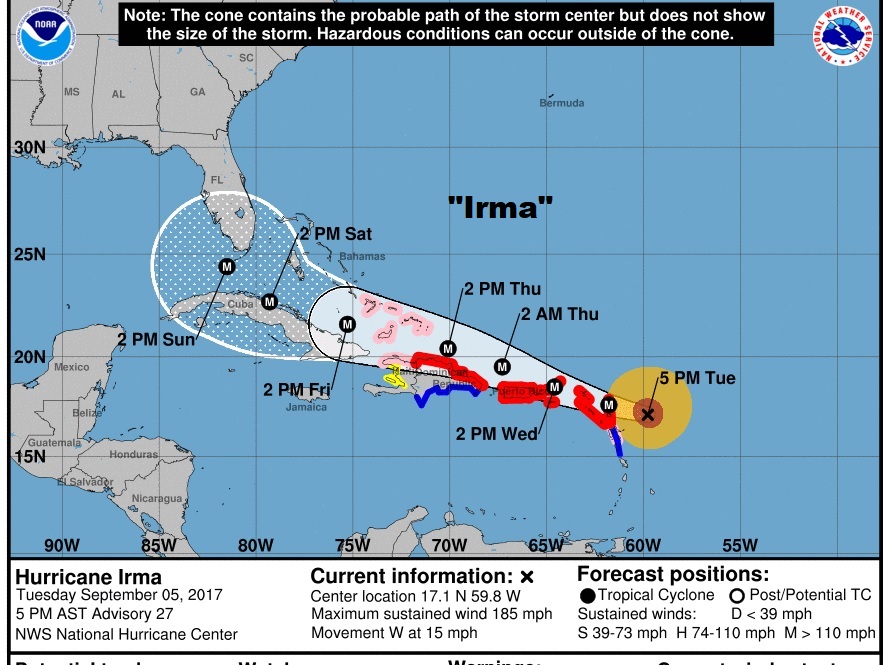 DISCUSSION AND 48-HOUR OUTLOOK
——————————
At 500 PM AST, the distinct eye of Hurricane Irma was
located near latitude 17.1 North, longitude 59.8 West. Irma is
moving toward the west near 15 mph (24 km/h). A turn toward the
west-northwest is forecast to begin tonight and continue for the
next couple of days. On the forecast track, the extremely dangerous
core of Irma will move over portions of the northern Leeward Islands
tonight and early Wednesday, move near or over portions of the
northern Virgin Islands Wednesday, and pass near or just north of
Puerto Rico late Wednesday and Wednesday night.

Maximum sustained winds are near 185 mph (295 km/h) with higher
gusts. Irma is an extremely dangerous category 5 hurricane on the
Saffir-Simpson Hurricane Wind Scale. Some fluctuations in intensity
are likely during the next day or two, but Irma is forecast to
remain a powerful category 4 or 5 hurricane during the next couple
of days.

Irma could directly affect the remainder of the Bahamas and Cuba
as an extremely dangerous major hurricane later this week. Residents
in these areas should monitor the progress of Irma and listen to
advice given by officials.

The chance of direct impacts from Irma beginning later this week
and this weekend from wind, storm surge, and rainfall continues to
increase in the Florida Keys and portions of the Florida Peninsula.
However, it is too soon to specify the timing and magnitude of these
impacts.

SPAGHETTI MODEL TRENDS:  Most credible dependable models, show Irma taking a hard right turn into south Florida and going up the spine of the state from south and southwest to north and northeast.  On this first frame, notice one outlier, the Canadian Model (CMCI) takes Irma into the Florida panhandle.  But even the Canadian has shift a few miles east on this run.  Of course, the big question is, will that turn, most models are indicating,  take place and when.  This still could be a Gulf of Mexico storm. 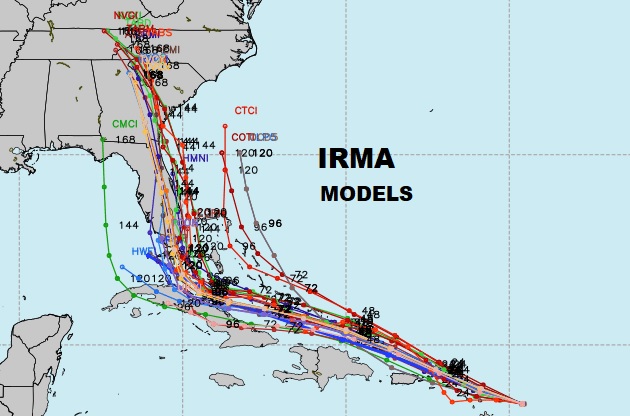 In fact most models have shifted a few miles east – most notably the American GFS.  Some of the global model tracks and their “member ensembles” are shown below. The big question is, can Irma make that critical turn at the right time. Otherwise we may be looking at a Gulf of Mexico system.  That’s still a very real possibility.  Here’s the operational run of the highly respected Euro model. 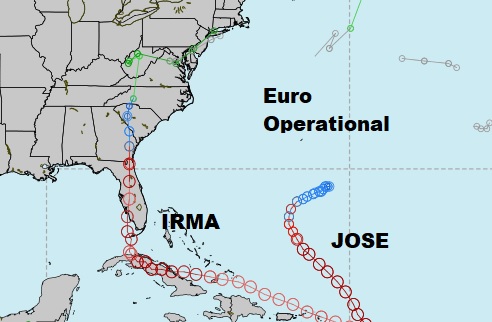 The GFS is the only global model who’s operational run (the blue line) actually takes Irma off Florida’s east coast. 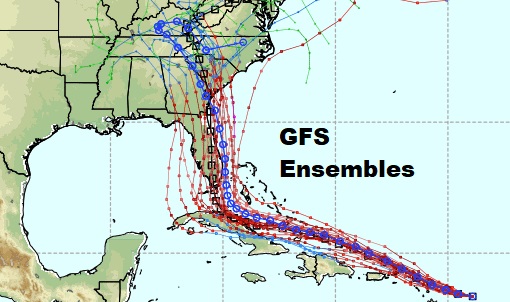 AND WHAT ABOUT JOSIE?:  Josie is the new tropical storm which has formed behind Irma in the tropical Atlantic.  Winds are now 50 mph and this system could become a hurricane by Thursday, and possibly even graze some of the windward Islands being affected by Irma.  Expected to be a cat 2 hurricane as it curves into the Atlantic.

TROPICAL DEPRESSION 13 IN THE GULF:  Just when you think you’ve seen it all, we have TD 13 in the SW Gulf of mexico.  Max winds 40 mph, moving east at 3 mph. 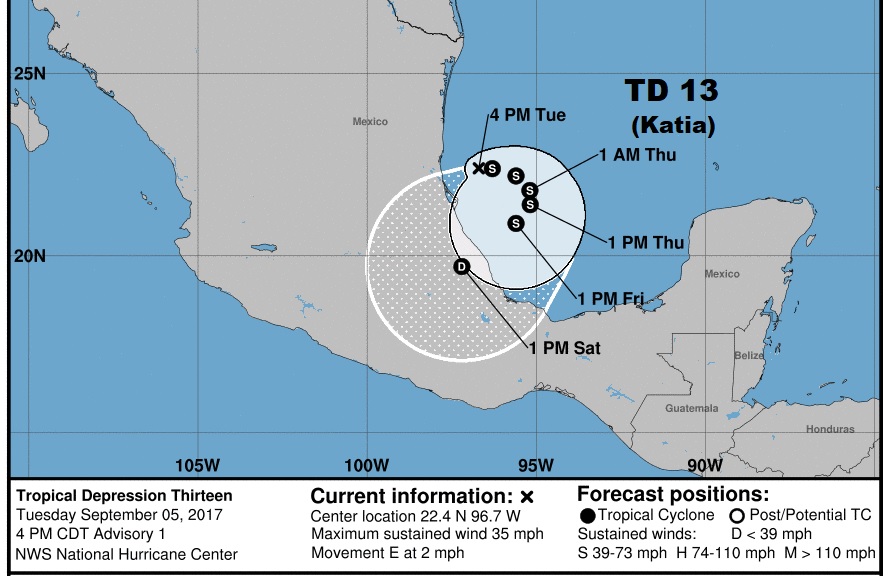 I’ll have another complete update for you tomorrow morning, first thing.  Your video will be online by 4:45AM.  Stay weather aware, and please download out Weather App if you have not already!  Please follow me on Twitter:  @RichThomasWX.