It’s a wet Sunday morning across our state. Periods of rain will taper off later today.  There are two cold fronts in our future. The first one, will bring an end to our rain later today.  The second Cold front will deliver a brief shot of very chilly air by Monday night into Tuesday, through Wednesday morning. 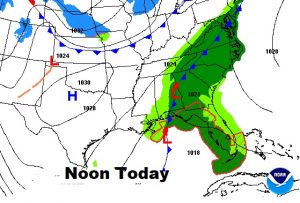 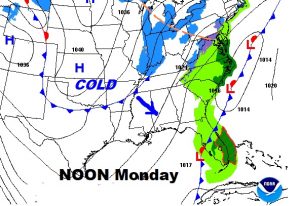 TODAY:  Periods of light to moderate rain this morning and mid-day will; begin to taper off by mid afternoon.  Clouds will linger through the evening. Partly cloudy by late tonight.  High Today 62°   Cooler tonight…low 44°

Here are some Future Radar snapshots: 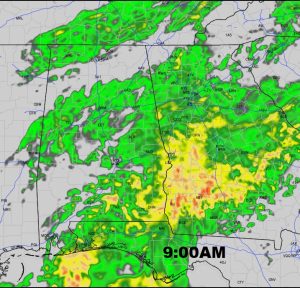 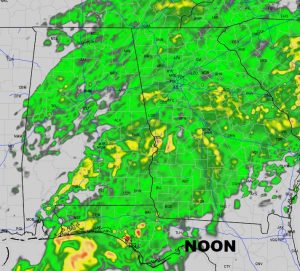 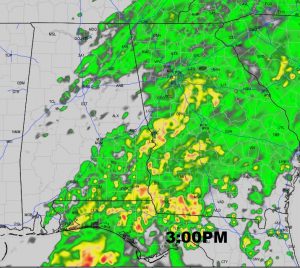 NEXT FEW DAYS:   Tomorrow will be a breezy day, behind the first front, as we wait for the second cold front arriving Monday evening.  Tuesday will be a cold winter’s day.  Coldest morning, Wednesday, with a Hard Freeze and mid 20’s by Dawn.  Then a quick rebound Wednesday and Thursday.  Another front delivers a round of showers on Thursday night and Friday. 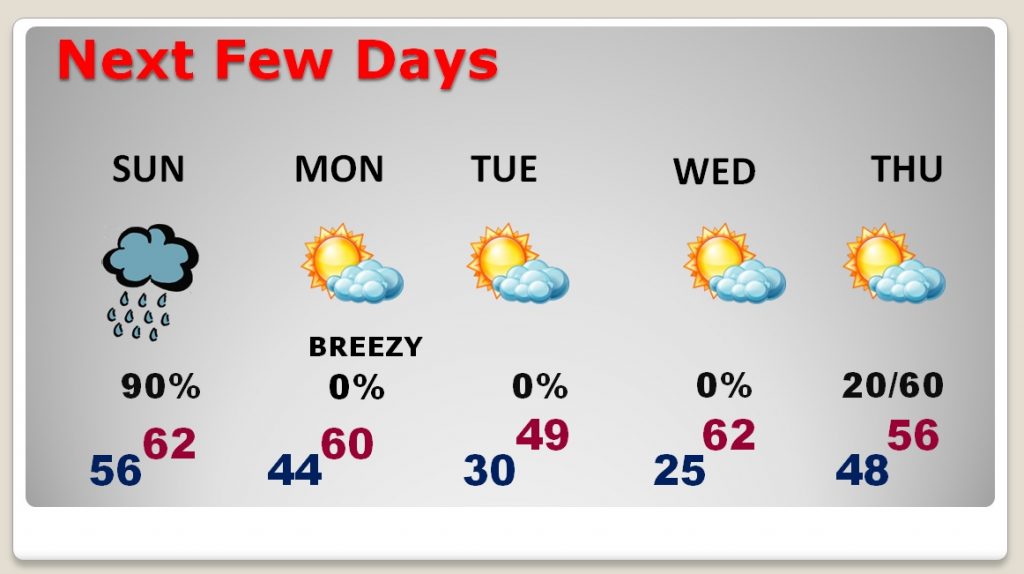 LOOKING AHEAD:  I love this first graph from the Euro, which clearly tells the story of the next 10 days.  It shows the sharp temp drop Tuesday and Wednesday morning, followed by a rebound, the next storm system, another big drop next weekend, and then a quick rebound and another storm system. 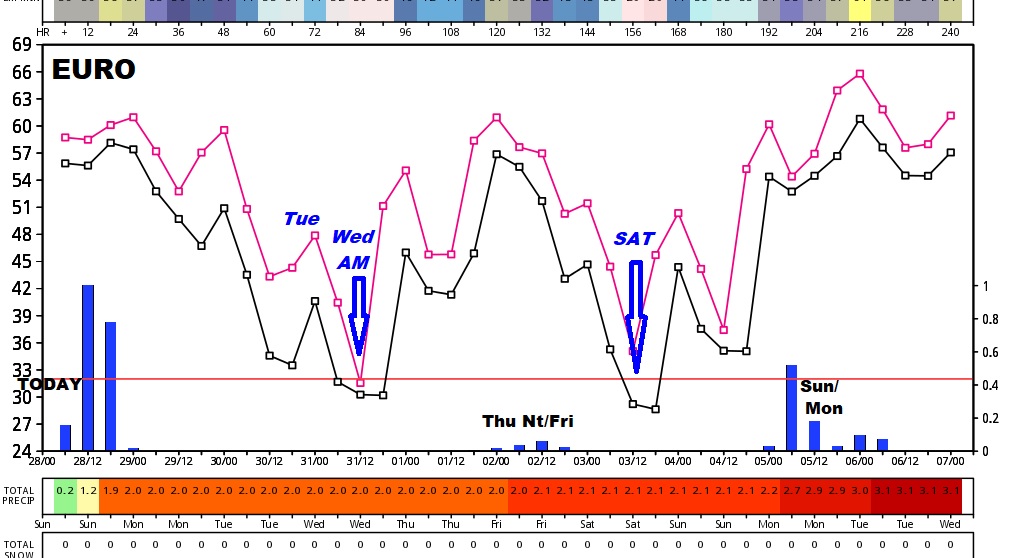 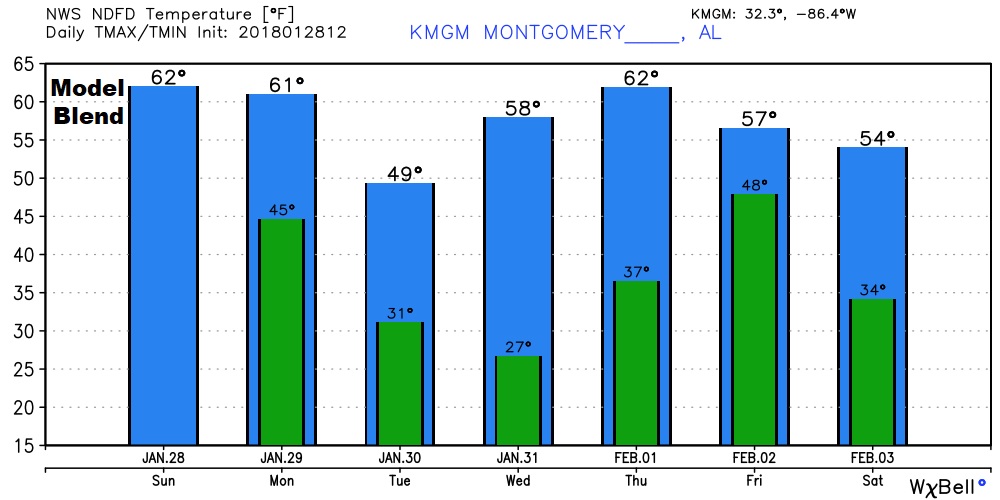 The GFS out 16 days…for now, showing the extreme arctic air leaving Alabama alone, through February 12th.  We’ll see.  It’ll be back in February. 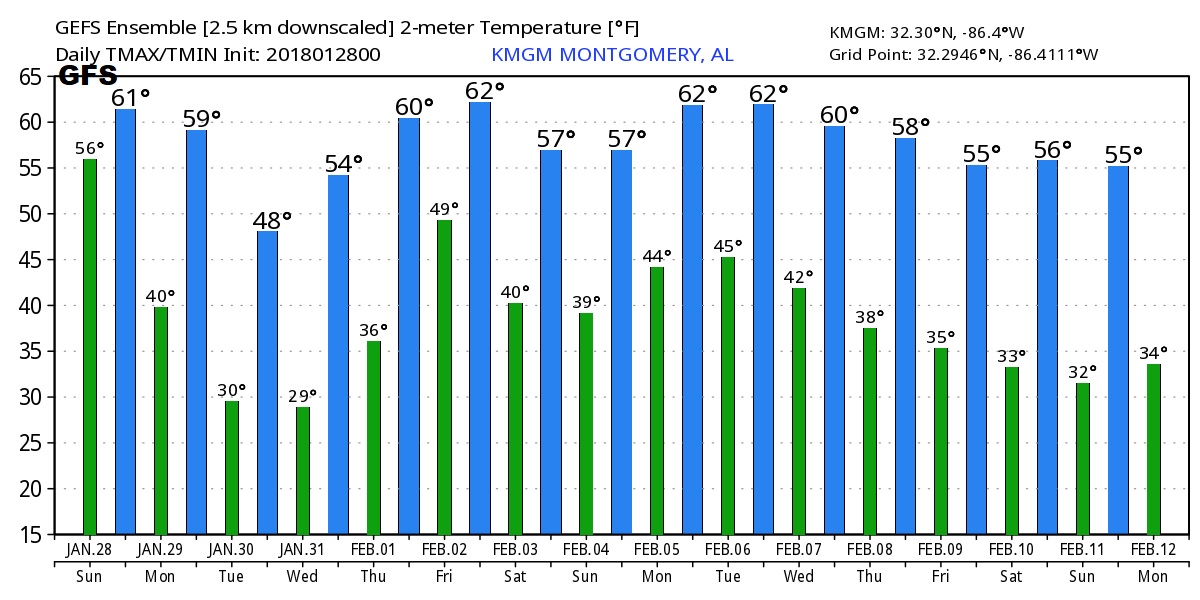 THIS WEEK’S SUPER MOON –The True Facts:  There’s a lot of misleading stuff on the internet about this week’s full moon on Wednesday night.  Supermoon.  Blue Blood Moon with a lunar eclipse.  Here’s the true facts.

Supermoon?  Well, yes, in that the moon will be closest to the earth, so it may appear about 7% larger than normal, especially when it rises in the east, close to the horizon after sunset.  (Wednesday sunset 5:17PM, Moonrise 5:42PM)

Blue moon?  Sure.  Not in color.  It’s a blue moon because it’s the second full moon in January.  No full moon in February, but there will be another blue moon in March.  It will have a slight reddish tint..thus the “blood Moon”.

Lunar Eclipse?  YEP, but unfortunately, only some of the western U.S., including Hawaii and Alaska, will see the full eclipse. 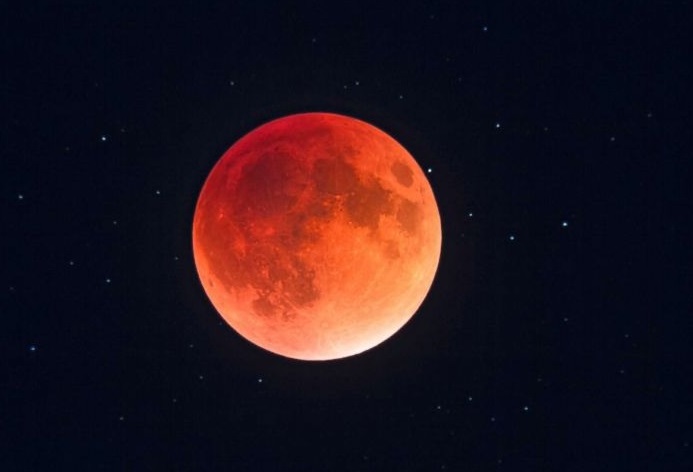 I’ll have your next complete video will be Tomorrow morning, posted by 4:45AM.  Have a good day!