Spotty shower are in the cards from time to time, today tonight and Monday.  After an 82° Saturday, we’ll be a few degrees cooler today and more than 20 degrees cooler tomorrow. Chilly air from the east called “a cold air wedge” will affect eastern and central Alabama Monday.  The Storm of the Week will drench the area Thursday into Friday with showers and thunderstorms.

TODAY:  Mostly cloudy.  Scattered showers will be around at time, as a weak frontal system slides southeastward.  Highs in the upper 70’s.  Low tonight 53.  Rainfall amounts will be light, and spotty.

Future Radar gives you a sense of how random and widely scattered the showers will be today & tonight.  Have the umbrellas handy.  You may need them from time to time, or not. 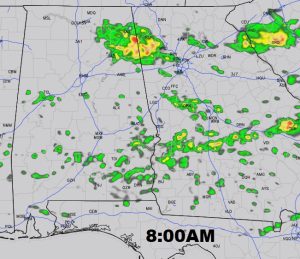 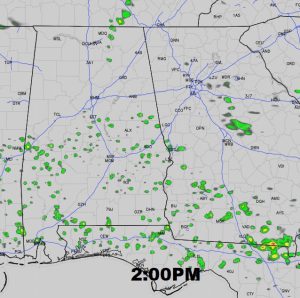 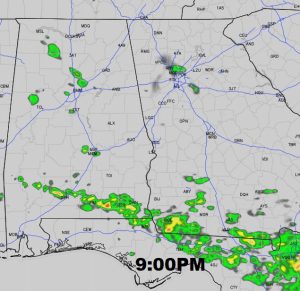 MONDAY: “COLD AIR DAMMING” :  Tomorrow’s set-up shows a “Cool Wedge” or an effect called Cold Air Damming (CAD), when chilly air circulates down the Appalachian chain and migrates into eastern and central Alabama on an easterly breeze.  Highs, in a situation like this, vary widely, from west to east across the state.  Tomorrow’s highs will struggle to reach the mid 50’s in Auburn,  while Mobile’s high will be in the mid 70’s. It will be a breezy day with winds gusting to 20 mph or higher at times.  Spotty showers will be around tomorrow. 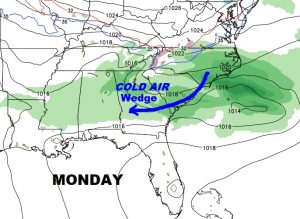 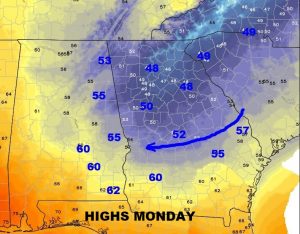 NEXT FEW DAYS:   Monday will be breezy & chilly with a risk showers, but temperatures will bounce back Tuesday through Thursday.  A major storm system will drench are area Thursday and into Friday, before drier air arrives by the weekend. 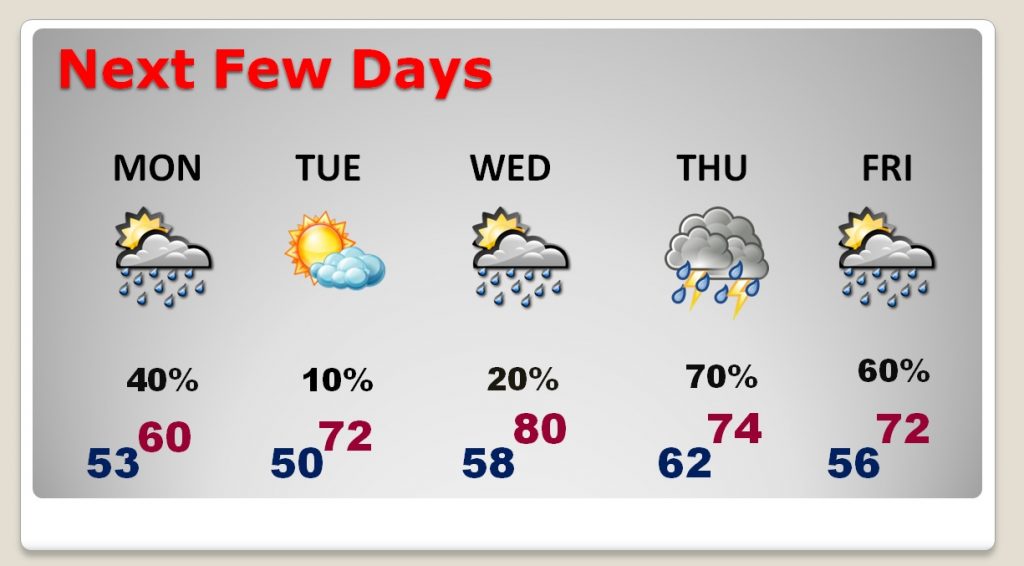 LATE WEEK STORM SYSTEM:  A significant, but relatively slow moving storm system, will affect the state in the Thursday/Friday time frame, as a cold front moves across the state.  The details of how this will unfold are uncertain, because 2 global models, the GFS and Euro are in disagreement on timing and other details.  It does appear to be a “soaker” because of it’s slower movement.  Details of whether any severe storm threat is unclear right now.  We’ll know more as we get closer to this event. 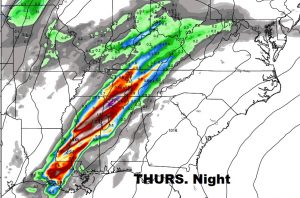 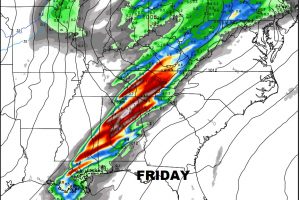 I will have a complete video tomorrow morning, online by 4:45AM as we break down the details of the week ahead.