On this special update, it’s becoming clearer that we will see certainly a Depression the the Gulf over the Memorial Day Holiday Weekend, but more likely a Tropical Storm.  Invest 90-L continues to develop over the Yucatan. Model trends continue to suggest that, late in the weekend, conditions will become more favorable for tropical cyclone development, an now, key models are coming together on a consensus on the potential track.  The central Gulf coast is clearly in the cross hairs.  The most likely time for landfall will be later in the weekend, particularly toward Sunday night or Monday.  However the affects could begin even earlier. Air Force RECON will investigate the system Friday.

By the way, the first name on this year’s list of tropical names is Alberto, a name which has been re-cycled many times before.

Before I show you the models, here’s the latest from the National Hurricane Center, which now says there is 90% chance that Invest 90-L will develop into a depression or Tropical Storm. 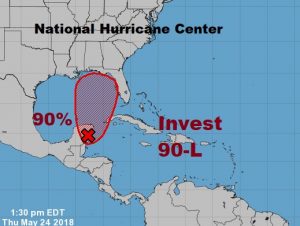 MODEL TRENDS:  Both the GFS and the EURO  tracks have come very close together on the potential path of this tropical system 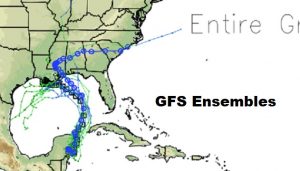 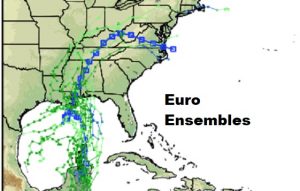 The GFS has the system just south of the Mobile Bay on Sunday night at 7PM.  Then it lifts northwestward into central Mississippi. 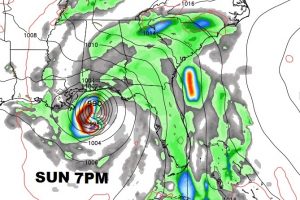 The EURO is a little slower on arrival time.  It takes the center just south of the Mobile bay at 1PM on Memorial Day Monday.   Then the system lifts northward, hugging the Miss/Alabama border Monday night through Tuesday and into Tennessee on Wednesday. 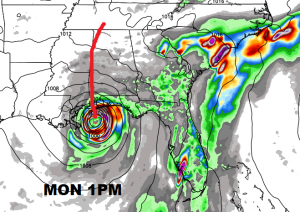 The Euro now gives close to a 60% chance of this system becoming a tropical storm. 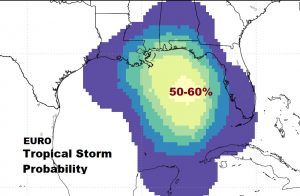 I’ll have much more for you in the morning on a Special Friday morning video update, online by 4:45AM.