The National Hurricane Center has issued Advisory #1 on Sub-tropical Storm Alberto, currently located in the NW Caribbean sea, just east of the Yucatan.

It’s complicated, but true tropical storms are warm core systems from the surface to the top of the storm.  Non-tropical storms are warm in the low levels, but with cold air aloft.  This system is a hybrid.  While it is “sub-tropical” now, it may become purely Tropical, later the weekend across the north central Gulf.  Here’s the Alberto forecast cone.  And notice that we are all in the “cone of uncertainly”.  We could see a storm with 65 mph winds on the Alabama coast on Monday.  That would be rather significant.  It would put all of us on the stronger right side of the storm, with the heavier rainfall, and the threat of tornadoes, when the system makes land fall. 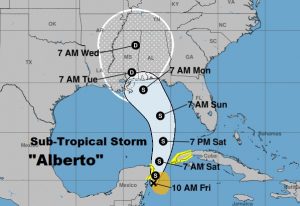 Here are some highlights from NHC Alberto Advisory number 1.

In case you missed it…here’s my morning video briefing.

By the way, the official start of the hurricane season is a week away on June 1st.  I’ll keep up to day with the latest all weekend with Blog updates as needed.  Stay weather aware.