The National Hurricane Center has issued a Tropical Storm Watch along the north central US Gulf coast, which includes much of the Florida panhandle, all of the Alabama Gulf coast, and west into Louisiana.  It extends from Indian Pass Florida to Grand Isle, LA.   A Tropical Storm Watch means tropical storm conditions are possible within the next 48 hours.  Furthermore, NHC says that if the intensity forecast continues to increase, a Hurricane Watch may be requited along the Gulf coast.

Sub-tropical Storm Alberto, located in the NW Caribbean, 315 south of the west tip of Cuba.  Right now, it is moving east at 2, but it will lift northward into the Gulf of Mexico, where conditions are more favorable for development.  Currently, it is a minimal tropical storm with 40 mph winds.  By mid day Monday, south of the Mobile Bay, it is forecast to be a 65 mph tropical storm.  Hurricane intensity is 75 mph.

The cone of uncertainty covers much of Alabama, Mississippi and part of Louisiana.  The system could make landfall by Monday evening, as it slowly moves northward.  However the affects of Alberto will be felt from Alberto well before landfall, as conditions deteriorate through the weekend.  Dangerous rip currents are possible, coastal flooding, flash flood watch, etc.

Even for those of us well inland here in Alabama, Alberto may have several adverse affects including torrential rainfall totals, and the threat or tornadoes from Monday PM through much of Tuesday. 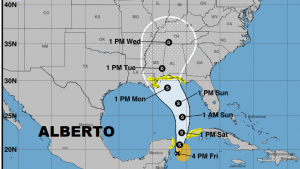 Here’s a close-up of the cone.  Notice the intensity of the system Monday afternoon.  Notice the slow movement northward and its expected position 24 hours later.  This will produce tremendous amounts of rainfall and the threat of coastal flooding. 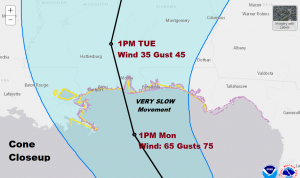 There will be a complete blog update first thing tomorrow morning, which will be posted to your APP, on Facebook and other social media outlets.