Good morning!  Where do I start?  Let’s take things in order.  Extended Summertime continues today. We’ve been in the low 90’s for five days.  Today and tomorrow, that streak continues.  The big upper level heatwave high starts to weaken a bit by Monday and Tuesday, allowing spotty pop up storms.  But, the big news, in the week ahead, involves the tropics.  Invest 91-L will almost certainly become a Depression, and then, very likely Tropical Storm Michael.  Most spaghetti models point in our general direction.  Everything depends on timing, as an approaching trough will steer the storm.  Many details are unknown, and as you will see below, model solutions vary.   That puts much uncertainty into what impact this tropical system could have on us.  I’ll bring you up to date on model details below…but first…

NEXT FEW DAYS:    Small rain chances return, with widely scattered storms Monday and Tuesday.  Rain chances ramp up quite a bit Wednesday, Wednesday night into Thursday with the approach of the tropical system.  This forecast is, of course, subject to significant revision in the coming days, as the future path and timing, and intensity of this system changes and becomes more clear. 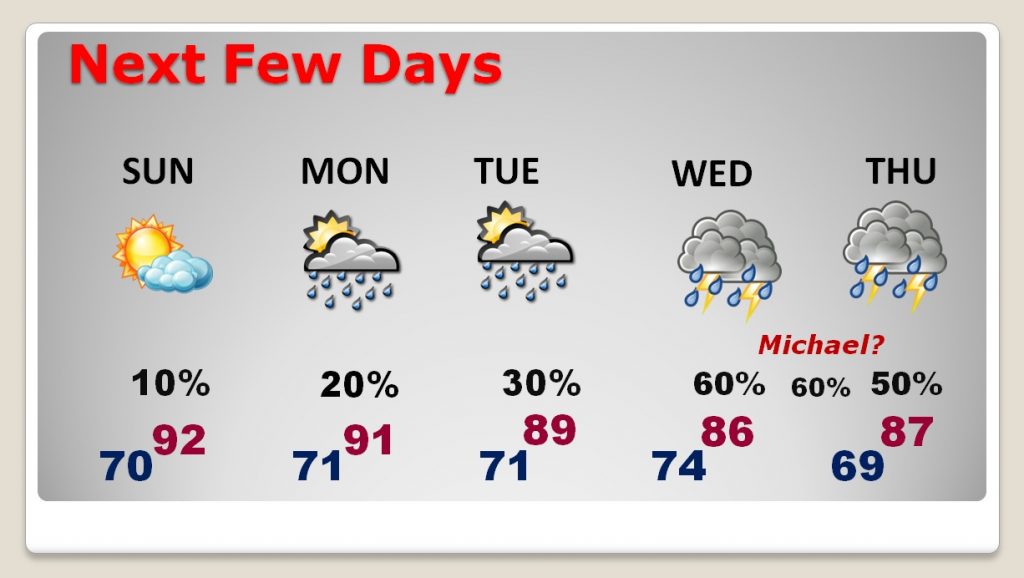 TROPICAL UPDATE:   Let me just state the simple facts, an we will go from there.  Invest 91-L is just a cluster of thunderstorms off Honduras in the west Caribbean.  It’s moving NNW at only 5 mph.  It has been undergoing wind shear, which inhibits development.  However, it is about to break loose of it’s hostile environment, as it heads toward the Yucatan and the southern Gulf.  National Hurricane Center gives this system a 70% chance of development next 48 hours, and a 90% chance next 5 days, into a tropical cyclone (Depression or Tropical Storm).   Let’s talk about the computer model differences. 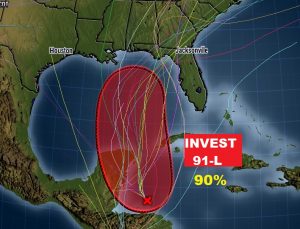 GFS SOLUTION:  The American GFS model is fastest and farthest east.  It shows a tropical storm (or hurricane), nearing the Florida panhandle around lunchtime Wednesday and then moving rather quickly across north Florida, south Georgia to the Atlantic coast by Thursday morning.  Obviously, this solution would have the least impact on Alabama.  Here’s a snapshot of then GFS operational run at 1PM Wednesday. 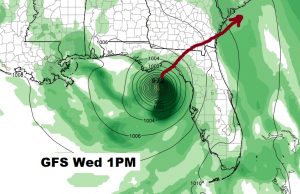 And here’s the GFS ensemble members (spaghetti models).  Almost of the ensemble tracks leave Alabama alone.  We like that.  But, it’s much more complicated.  Another important model we hold in extremely high regard has a very different solution. 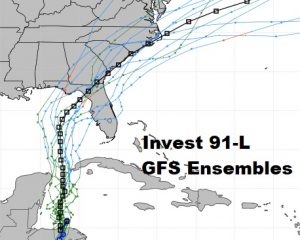 EURO MODEL (ECMWF) SOLUTION:  The Euro model, which has such an excellent track record, particularly with Gordon, is slower and farther west.  It brings the storm close to Pensacola Bay early Thursday morning.  Then it has it tracking into southeast Alabama, and cutting across the southeast quarter of the state and then into south Georgia.   This, naturally would have a much more significant impact on Alabama weather.  There are other models which take this system well into Alabama.  Here’s a snapshot of the Euro operational run at 7AM Thursday morning. 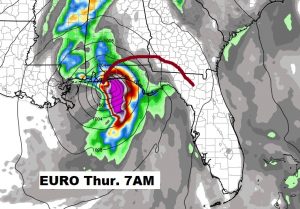 The Euro Ensembles just arrived as I’m writing this before 6AM.  Notice a few things.  A few of the Ensemble models track well into Alabama.  Even a few in far west Alabama.  (even Mississippi)  However, many models are farther east.  You see two prominent lines.  The blue line is called the operational run (see Thurs AM snapshot above).   The black line is the average, split the difference, middle track of all the ensembles. Those mainly show a sharp eastern turn after landfall.  We like this trend.  Remember, though, we are about 138 hours from this event.  Tracks will change.  We’ll biting our nails for a few days, as trends shift back and forth.  Stay tuned. WHICH MODEL TO BELIEVE?  Why are there significant differences in the model solutions?  It has to do with an approaching trough of low pressure out west, which will steer the tropical storm.  The movement and placing of this trough means everything to the storms, future, speed and intensity.  Let me remind you, we will know much more about this developing system on Sunday afternoon when the first Air Force Recon is scheduled to visit the system.  Data gathered from this mission will be critical.  This data will be ingested into future model runs, which should mean we will start to see a clearer solution by Sunday night and Monday.

COLD FRONTAL RELIEF 8-10 DAYS AWAY:  After the tropical system departs, trailing behind it will be rather significant cold front which should finally overcome resistance and sweep across the Gulf states, perhaps as early as next weekend.  The GFS is fastest.  It bring the front in late Saturday night October 13th, with relief beginning Saturday.  The Euro is slowest.  It brings the front in late Sunday night or Monday.  The truth, perhaps lies in between.  The point is:  1) it’s coming, 2) and it will have nice relief behind it.  It looks like a significant change.  Stay tuned.  That’s still way out there.

There will be another Blog update first thing Sunday morning. We obviously have much to talk about.  Have a nice weekend!