A massive storm system in the middle of the country is tracking east.  While this storm is causing miserable weather, with extremely heavy snow for millions from Missouri to the Ohio valley, for us this system will bring periods of rain, starting this afternoon and in through tonight.  No severe weather, in fact probably no thunder.  So, for Alabama, we’ll be dealing with the easy part of this big storm.  Rainfall amounts will not be heavy.

Here’s the set-up at Noon today.  Look at the size of this storm.  It will have an extremely adverse affect on travel.  For instance, take St. Louis, which has had 9” of snow so far, with a total of 10-15” expected.  Parts of I-44 are closed.  That problem will head eastward today.   Worse than snow, some spots will have to deal with icing issues, too.  It will cause a travel nightmare for many. 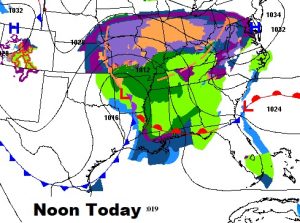 TODAY:   Showers, mainly after noon. Showers will be wide spread later this afternoon, this evening and tonight. High near 57.  Low tonight 49.  Rainfall amounts should be under .50”.

Here’s a peek at a couple of future radar snapshots.  I picked 3PM and 9PM.  Notice a few heavier downpours, especially this evening. 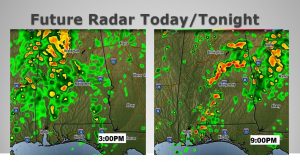 NEXT FEW DAYS:   This system clears out early on Sunday.  I have removed the rain chance.  It’ll be mostly cloudy with highs in the mid 50’s.  Monday will be chilly, with highs only in the low 50’s.  We’ll flirt with a freeze Tuesday morning.  But, overall next week will be OK…quiet, storm-free, lots of sun, with highs in the 50’s, rising to 60 or above by mid to late week. 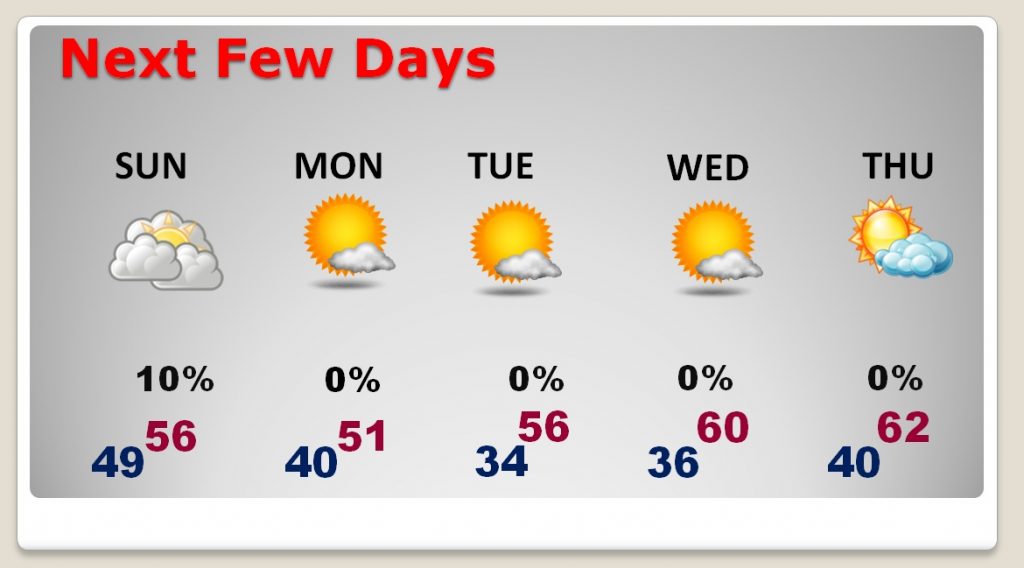 NEXT STORM SYSTEM:  The next “big deal” storm system affects us this weekend.  Looks like just rain.  No winter weather issues are foreseen.   Too early to speculate on any possible severe weather threat.   Here’s a snapshot of next Saturday (Jan. 19).  This storm system will affect many states, in various ways. 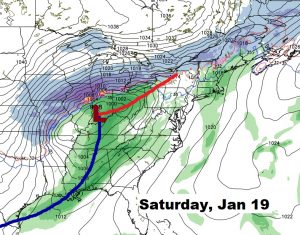 I’ll have another blog update on Sunday.  Have a great Saturday!