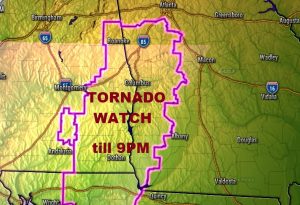 A significant storm system & cold front is approaching.  All of our area is under a Level 2 severe weather risk, particularly this afternoon into early evening.  The greatest risk window for most of us will be from late morning through late afternoon.  While damaging wind gusts will be the main threat, a few tornadoes are certainly possible.  Most of the action will be along a line of storms which will crisscross the state.

Here’s the wide shot of the treat area from the Storm Prediction Center. 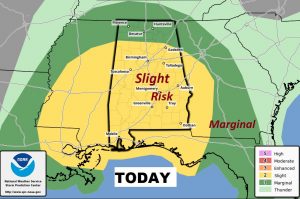 This graphic from the NWS in Birmingham is helpful.  It indicates that the severe weather window could begin as early as 10AM in the far west, to as late as 7PM for the far southeast. 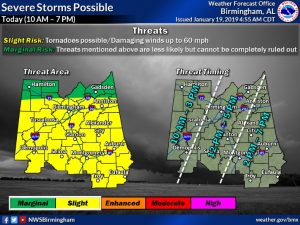 Future Radar gives you a sense on the ‘squall line’ movement through the day.  Remember this is just a model idea.  Timing and details could evolve differently.  This is just a general guide. 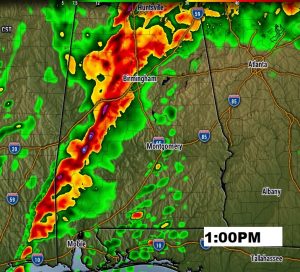 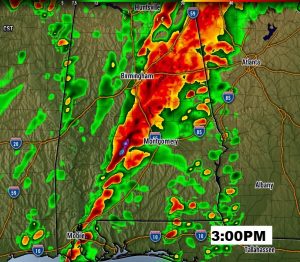 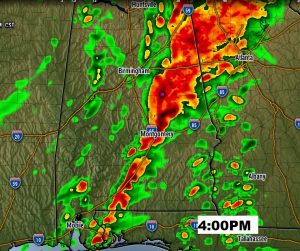 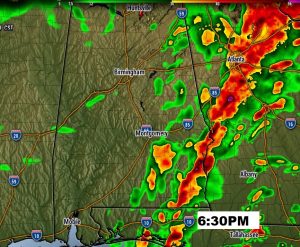 WIND ADVISORY TODAY:   Outside of thunderstorm areas, the winds will be quite gusty today, associated with the dynamics of the parent low pressure system moving from Arkansas to Tennessee.  Sustained winds in the 20 to 25 mph will gust to 30 mph at times.  This advisory runs through 7PM, but even behind the front, winds will be quite strong as the arctic air rushes in tonight and Sunday.

Here’s the storm set-up at Noon.  This is a rather dynamic storm system, with a low near Nashville.  Besides the severe weather threat for us, this storm will produce heavy snow from the mid west to the northeast causing several serious travel problems. 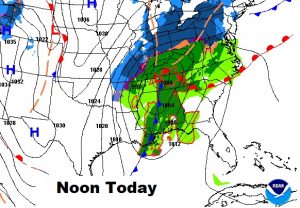 RISK OF FEW SNOW FLURRIES LATE TONIGHT:  Arctic air follows the cold front, and there could be even minor flurries in the late night/wee hours across the northern half of the state, perhaps as far south as I-85.  No accumulations are expected.  The threat of a brief flurry could even last through the early morning hours till perhaps 10AM.  Just a novelty, and nothing more.   Here’s a 3AM Future Radar snapshot. 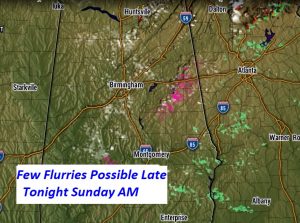 NEXT FEW DAYS:  Sunday and Monday will be raw winter days. Sunday’s high of 43 will seem much colder with the gusty winds.  Bundle up…coats, hats, gloves.  Low Monday morning around 27.  MLK day high with sunshine 50.  Another storm system delivers another chance of rain Tuesday night into Wednesday.  We’ll be back to the mid 60’s  by Wednesday. 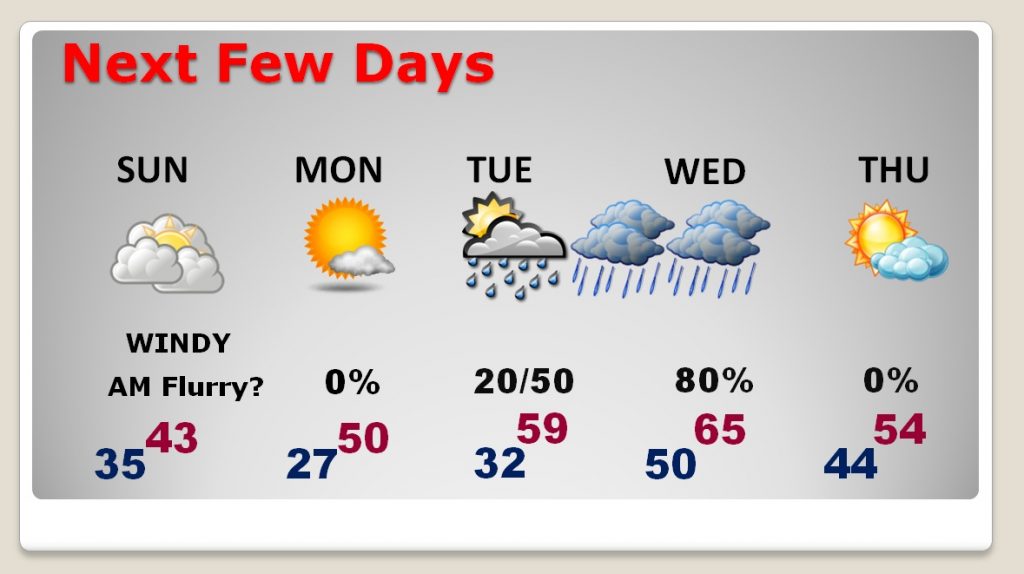 STAY WEATHER AWARE:  Make sure your have our weather app on your phone or tablet.  It knows where you are.  It will alert you, instantly, to severe weather watches or warnings wherever you are – plus advanced interactive radar & future , where you can zoom into your neighborhood.  And more, hour hourly forecast, 10 day forecasts, etc.

During the height of the severe threat, I’ll be LIVE streaming from the Bluewater weather Center.  The real time radar will be up and I’ll be commenting as needed . We’ll interrupt across the Bluewater family of radio stations for critical warnings affecting  the core area, as needed.  We’ll also be available to join our friends at the Alabama News Network, on CBS 8 and ABC 32.   As Shane Butler and his crew of meteorologists break in with warnings, I’ll be available to contribute LIVE on their air, too, from our Bluewater weather center.

You can see our weather stream a number of ways.  For instance, on our weather app, click on the YouTube tab and select Live stream.  Take us with you to your safe place.    You can also see the LIVE stream on our website: Richthomasweathernetwork.com, and on YouTube at Rich Thomas Weather.