There are a few new wrinkles in the weekend forecast, but the bottom line remains unchanged.  Clouds will dominate most of the time.  It will be rather cool to chilly at times.  Sunday’s forecast will be complicated by a “Cool Wedge” affecting the eastern counties.  The high temperature forecast Sunday will vary widely, depending on where you live.  Showers and storms will increase early next week, as an important front approaches.

Interesting set up this morning.  A weak front is stretched across north Alabama.  Do you see that precipitation on the radar?   Early this morning there’s a A slight chance of snow, freezing rain, and sleet, mostly  before 8am along the I-20/I-59 corridor.  But, it’s very light and minor.  No travel problems are anticipated.  Much of the precipitation is not reaching the ground. 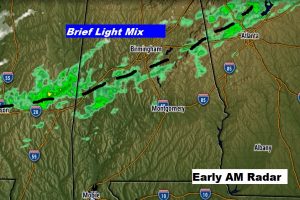 TRICKY SUNDAY FORECAST:  Sunday will be a cloudy day.  There could be a little drizzle or light showers.  Temperatures will be tricky.  A “cool wedge” will allow some chilly air to sneak into the eastern counties.  Sunday’s high will range from, perhaps the mid 40’s at Lake Martin and Auburn to as warm as 60 or above in Troy and Greenville.  I’ve got Montgomery’s high in the lower 50’s. 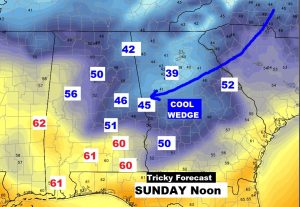 NEXT FEW DAYS:  Monday will be a little warmer, as the “wedge” breaks down.  High near 70.  Scattered showers are possible.  Better rain chances begin late Monday night in Tuesday as showers and thunderstorms become likely.  Wednesday should be dry and cooler.  Showers return Thursday. 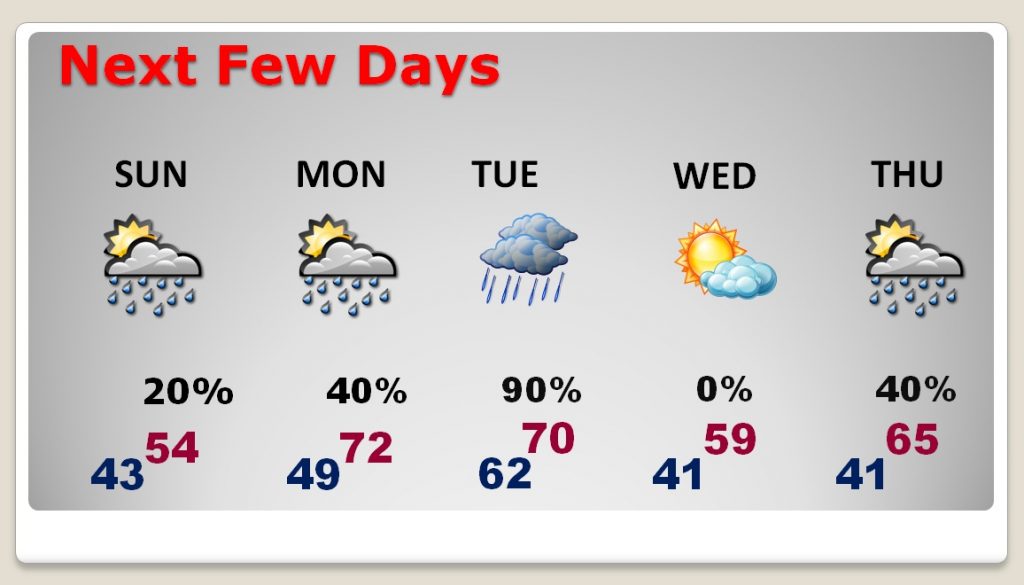 We’ll monitor the situation late Monday night into Tuesday for the potential of severe weather.  It’s hardly worth mentioning, but there could be a brief severe weather window, with a “non-zero tornado threat”.   We’ll take a closer look as we get closer.  Here’s the Severe Risk Map for Monday, through 6am Tuesday.