It’s a quiet forecast on this Sunday.  A “cool wedge” will make some counties colder than others.  For instance: Today’s high in Atlanta will reach 36 while Troy could reach 66.  More about today’s cool wedge below.  But, what has my attention, are two storm systems we’ll be dealing with this week.  There is at least a  potential severe threat from the Tuesday system, and perhaps a more substantial severe threat from the Friday system.  Both have my attention.

TODAY:  Mostly cloudy.  High temperatures will vary widely depending on where you live.  Look at the high temperature map below.  Some towns in Lee county will struggle to reach 50.  Over the border in Georgia, only 30’s and 40’s are expected.  I think Montgomery will get to about 58 (on the edge of the “cool wedge”)  But, If you live in Camden, Greenville or Troy, you’re more likely to see the 60’s today.  Low tonight, upper 40’s for most. 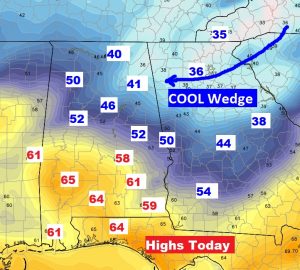 Should be mainly dry for most of us with rain chance 20% or less.  Still, though, Future Radar depicts some Isolated showers this afternoon. 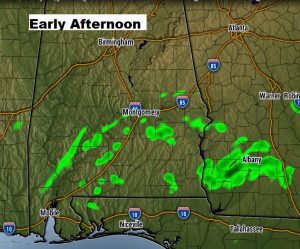 WEEK AHEAD – SEVERE WEATHER RISK?:  I think there will be a brief window of severe weather potential with this Tuesday storm system.  The threat will begin in the early morning hours before dawn in the western counties through mid-morning across the southeastern counties, as a line of thunderstorms sweeps through.  This appears to be what I would call a “non-zero tornado threat”.   Tiny, but worth mentioning. 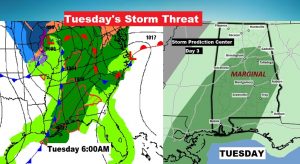 The second storm system on Friday, has the potential to be a bigger deal.  This way out there on Day 6, some I won’t over speculate.  However, early model indications indicate plenty of the ingredients of severe weather will be present – including instability or CAPE, and direction shear with altitude or “spin” for tornadoes.  It’s early, but keep in mind, we’ll need to zero in on this threat as we get closer to Friday.  ‘Tis certainly the season. 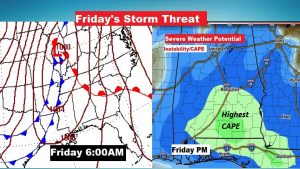 NEXT FEW DAYS:  Low 70’s Monday with scattered showers possible.  Showers and storms late Monday night in through mid day Tuesday.  The high of 68 will be in the morning.  Then falling.  Upper 30’s Wednesday morning, but a nice day.  The second storm system arrives late week, with all eyes on Friday in particular. 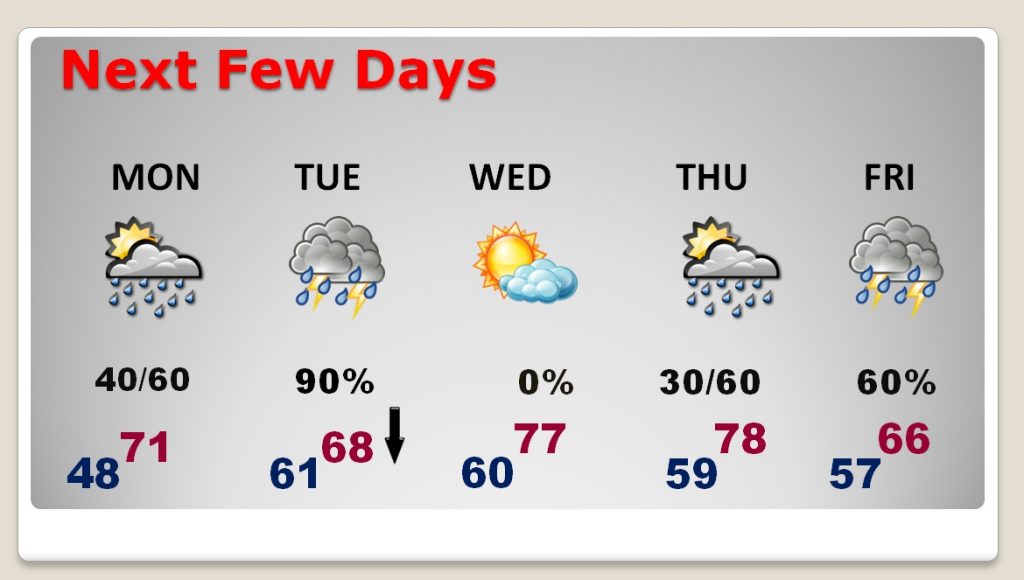 I’ll have a complete video update Monday morning at 4:45AM.  Have a great Sunday!