It’s not going to rain all the time, but there are several wet days in our future, through all of next week.  Today for instance, there will be many dry hours. Sunday will be a wetter day, with showers & thundershowers.  Monday, President’s Day will be the best of the next 7 days.  There may even be a little sun.  But, rain is not only likely Tuesday through Thursday, the rainfall could be locally heavy.  Parts of Alabama could see excessive rainfall totals.  Details below.

TODAY:  The greatest risk of spotty showers will be mostly this morning, for most of us, as a weak front drifts south toward the coast.  It will be mostly cloudy with a few “sun-breaks”,  and mild.  The average high for today will be very close to 70.  It will be mild tonight, low 58.

SUNDAY & MONDAY:  The front near the coast returns northward, as a warm front on Sunday, and it will act as the focus for scattered showers and thunderstorms. High in the mid 70’s. Rain chances will generally average 40% daytime but rise  to 80% Sunday night.  Monday is the BEST day.  Chance of showers early, but then gradually some sunshine will take over.  High in the mid 60’s.  Enjoy Monday because we have some wet times ahead.   Here’s the set-up for Sunday. 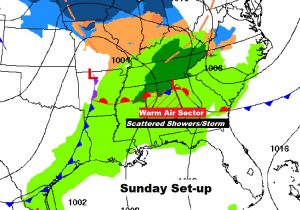 NEXT FEW DAYS:  The wettest days are likely to be Tuesday through the end of the week, as a series of storm systems move along a stalled front, somewhere in west Alabama.  The exact position of that front will have a lot to say about who gets the heaviest rainfall. 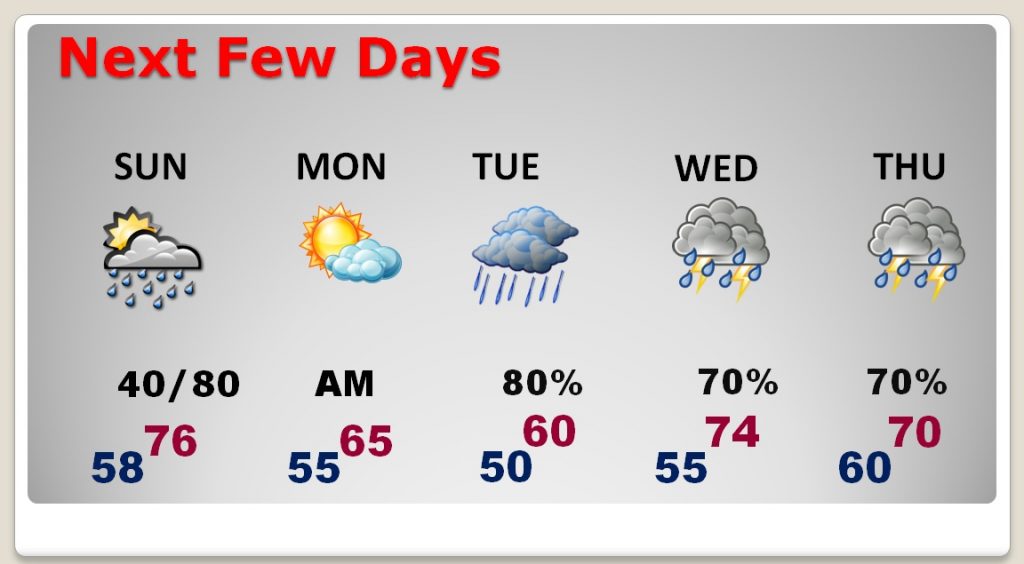 EXCESSIVE RAINFALL POTENTIAL: The numbers on the map below are a little more conservative than earlier forecasts, but still, some potentially serious rainfall totals are possible, especially from west central through north Alabama in the week ahead. This will cause river and creek levels to swell, and flooding in low lying areas is possible.  Even here in central Alabama, there is a  potential of 2-4”in the I-85 corridor, rising quickly to 3-5” north of I-85.  Obviously, these numbers are subject to revision. 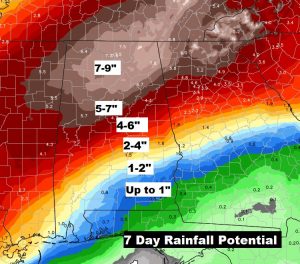 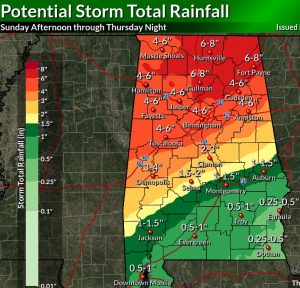 Here’s a wider shot.  Much of the South will be drenched by excessive rainfall in the next 7 days. 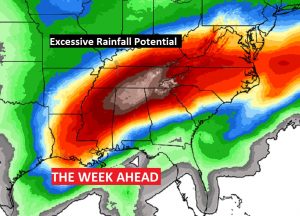 ANY SEVERE WEATHER THREAT?:  The jury is out on the severe weather potential, because the details are “muddy” and the models don’t agree.  However, based on what we know, I think the better odds for strong to severe storms is likely to be Wednesday afternoon.  Stay tuned for more over the next few days, as the situation becomes clearer.