Alabama is due for a treat by Tuesday night into Wednesday, as an extremely rare summer front moves through, practically the entire state, delivering a brief shot of nice air with lower humidity for a couple of days.

In the meantime, after a couple of days of thunderstorms with heavy tropical downpours, there will be more storms this afternoon.  Today, though, the storms will not be a numerous, and the better rain chances should be west of I-65.

Rain chances will pick up quite a bit Tuesday, ahead of the cool front.  By Tuesday night, storms will mainly be confined to the coast, and much of our state will enjoy a Nice Break for about 48+ hours.  By the end of the week, it’ll be business as usual as the humidity returns.

FRONTAL MOVEMENT Tuesday AM until Wednesday AM:

TODAY:   Morning fog burns off by about 9AM. Partly sunny.  Warm & humid.  High near 90.  Low tonight 75.  Scattered thunderstorms will develop, and will be most numerous in the afternoon and evening.  Storms will be a little more numerous across the western half of the state.

NEXT FEW DAYS:  Scattered storms Monday.  Showers and storms will be quite numerous as the front moves through Alabama Tuesday.  NICER air filters in Tuesday night through Wednesday night.  This nicer air will be most noticeable in central and north Alabama.  I’ll put in a small rain chance Thursday as the front may start to creep northward.   Moisture/humidity creeps back northward Thursday night into Friday. 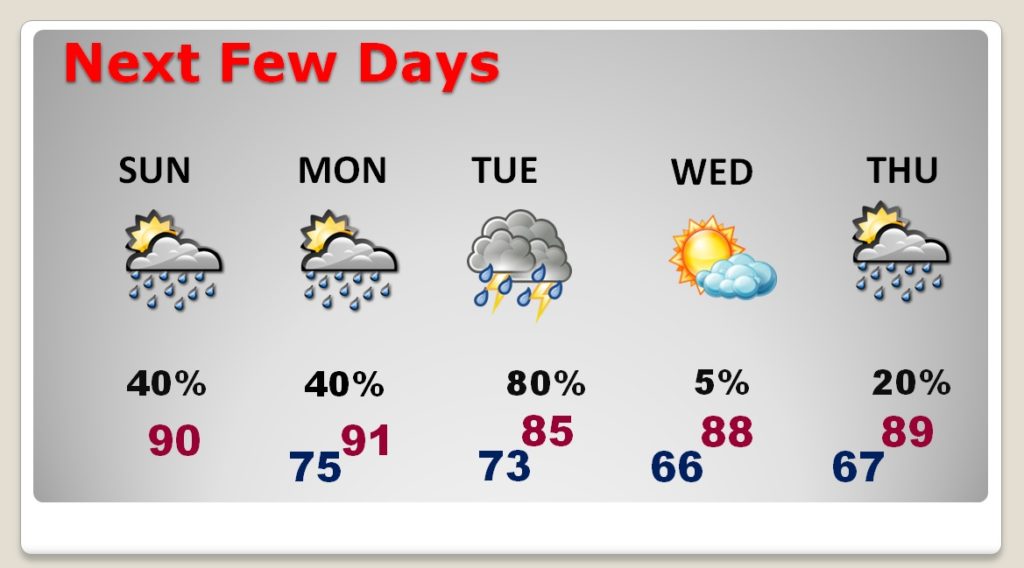 NEW IN THE TROPICS – INVEST 94-L:  NHC is tracking a new system.  A tropical wave 300 miles east of the Bahamas has been designated as Invest 94-L.  They have given it at least a 20% chance of becoming a depression or storm as it skirts close to the Southeast US over the next 5 days.  Stay tuned. 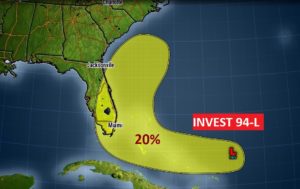 WEEKEND RAINFALL AMOUNTS:  How much rain did you get at your house this weekend?   Because the storms were slow movers, amounts varied widely.  Some of you could have had several inches.  But, not every town was that lucky.

I’ll have a complete video update Monday morning, online by 4:45AM.  Have a nice Sunday.  I’ll see you in the morning.