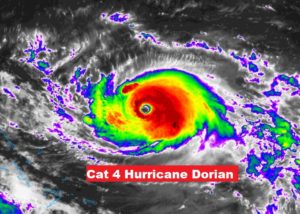 Hurricane Dorian in a dangerous Category 3 hurricane with 115 mph winds located 420 miles east of the NW Bahamas.  It is moving WNW at 9 mph.  It is expected to become at category 4 hurricane by tomorrow, and it’s expected to still be a category 4 hurricane as it arrives near the Florida coast early Tuesday. While some computer models have shifted their track to the east, this should be viewed with great caution.   Let me quote the latest technical discussion from NHC which suggests much caution:

“Given the collapse of the steering currents, the

track forecast by the end of the forecast period is highly

uncertain, and any small deviation in the track could bring the

core of the powerful hurricane well inland over the Florida, keep

it near the coast, or offshore. The models have not been very

turn, but there are more models now indicating that the turn could

occur near the east coast of Florida instead of well inland.  Given

this latest change, the NHC forecast has been shifted just a little

to the right at this time, but users should be prepared for

additional adjustments to the left or right depending on future 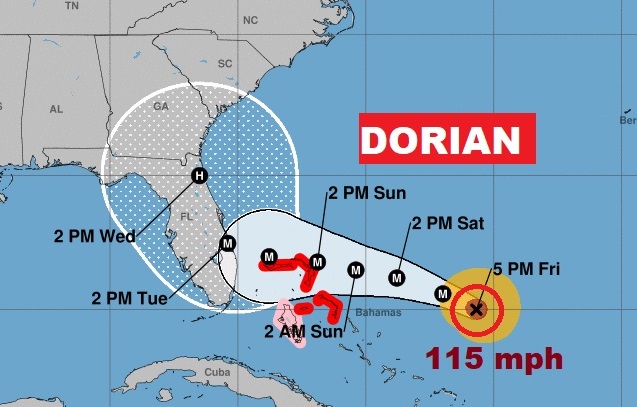 Here’s a closer look at the Cone details in closer to Florida.. 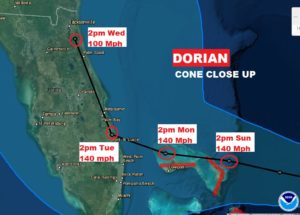 NEW EURO MODEL RUN:   It’s just ONE model run and you can’t hang your hat on one run…BUT the New Euro (12Z), with it’s eastern shift, has given hope to many in Florida. Could the center of Hurricane Dorian stay just east of the Florida coast? Too early to say, but a nice trend for sure

Here’s the American Global Model …the GFS.  It has also shifted quite a bit to the right (the east on its latest track) but it shows Dorian making landfall along the mid coast of eastern Florida and then moving northeast along the coast.  The GFS comes out every six hours.  The EURO, twice a day.

I’ll have MUCH more for you bright and early in the morning on your Saturday morning blog update, if not sooner.