TORNADO WATCH issued for much of south and SW Alabama until 4AM.   Tornadoes, Damaging wind gusts to 70 mph, and ping pong size hail possible.   AND another tornado Watch covers SE Alabama, SW Georgia and NW Florida until 6AM CDT.  SO, All of south Alabama is under a tornado watch.  Roughly the southern third of our state.

MEANWHILE, the severe weather threat has eased quite a bit across central Alabama.  The warm front was just not able to move too far north, thus easing the severe threat.

Good news for many after a very stormy day, which for many began before dawn.  Meanwhile, flooding concerns are still a big issue across much of central Alabama tonight. 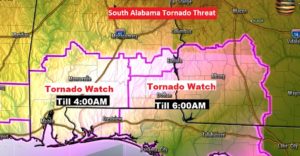