Good Morning!  It was feast or famine on the rainfall totals across central Alabama Friday evening.  Take Montgomery for an example.  The airport had only .18”, while East Montgomery had 2.18”.  Some parts of central Alabama had 3-5”.  Some storms put on quite a show.  There were even some power outages.

Big heat can produce big storms.  Today, random storms will fire up, again,  in the afternoon heat.  Some towns could see quite a bit of rain.  Other towns will not see one drop.

Meanwhile, all eyes on the Gulf of Mexico as Tropical Storm Cristobal churns northward.  A tropical storm warning is in effect on the Alabama Gulf coast, and as far east as about Destin.  Cristobal should reach the Louisiana coast late Sunday.  That puts Mississippi and the western half of Alabama on the wet and active side.  Locally heavy rain can be expected starting Sunday night.  The tropical “plume” or tail of moisture will effect our forecast with better than normal rain chances Monday through Wednesday.

Take a look at this Doppler Radar Storm Total Rainfall from Friday.  You can get a good idea on what areas had extremely heavy rainfall amounts.  Notice some towns had no rain at all. 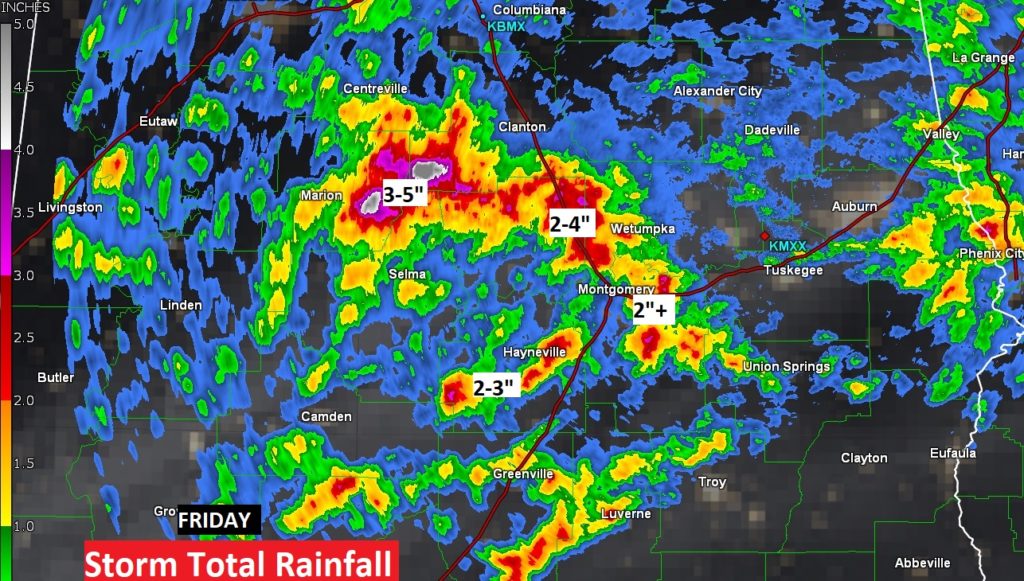 TODAY:  Hot & humid again…  High near 90.  (Yesterday’s high was 93 with a heat index of 101)   Random scattered pop-up storms will become rather numerous in the afternoon & evening hours with locally heavy downpours.  Low tonight 70.

Radar will likely be quite active and colorful again today. 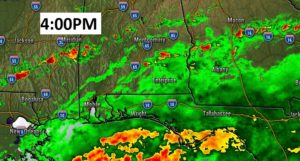 TROPICAL STORM CRISOBAL:  Cristobal is moving quicker now, as it approaches the central Gulf, moving northward at 14 mph, with 45 mph wind.  The forecast track has not changed much.  The Tropical Storm will approach the northern Gulf Coast late Sunday, moving ashore along the Louisiana coast.  The large wind field associated with the storm has dictated the Hurricane Center to issue a tropical storm warning far to the east of the landfall point, covering the Alabama coast and part of northwest Florida.  Here is the technical discussion on Cristobal from the Hurricane Center:   https://www.nhc.noaa.gov/text/refresh/MIATCDAT3+shtml/060841.shtml? 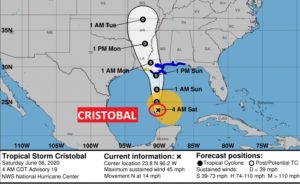 Cristobal  will probably be a 60 to 65 mph tropical Storm at landfall late Sunday. 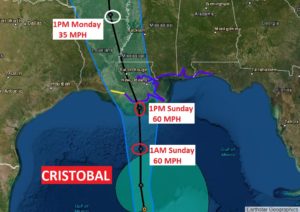 The Tropical Storm Warning continues in effect from Morgan City, LA., to near Destin, FL.

This map shows potential wind gusts late Sunday night, ranging from 20+ mph around Montgomery to near Tropical Storm strength on the Alabama coast. 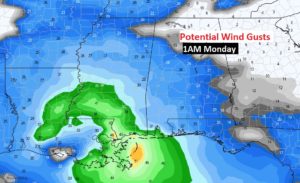 A few spin up tornadoes are possible along the coast Sunday, which is very typical with a landfalling tropical system.  On Monday, the tornado threat will mostly be in Mississippi.

RAINFALL POTENTIAL:  Rainfall amounts will vary widely across the state from 1-2” near the Georgia border to perhaps more than 5” on the coast. 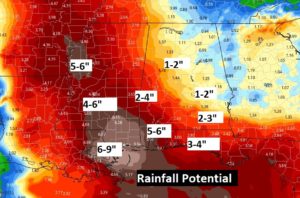 NEXT FEW DAYS:  Showers and storms will be likely and rather numerous especially Monday through Wednesday.  Storms will start to thin out in number on Thursday. 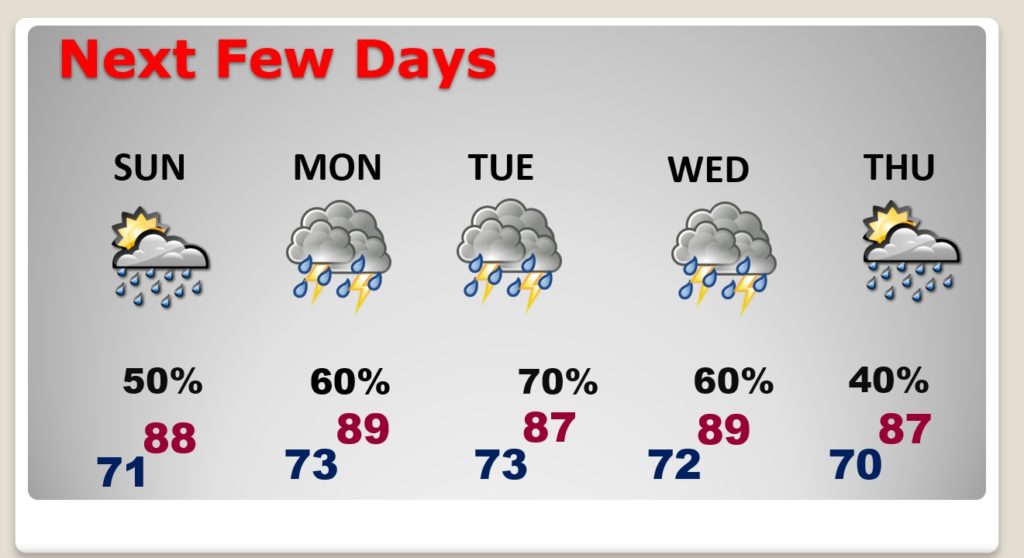 I will have another Blog update tomorrow morning.  Follow me on Twitter:  @RichThomasWX.   Have a great weekend.   Stay safe and well.