At 4PM CDT, #Cristobal is now very close to the Louisiana coast, about 60 miles south of New Orleans, moving north at 7 mph, with max winds still at 50 mph. Little or no change in intensity is anticipated as the center of the storm reaches landfall soon. 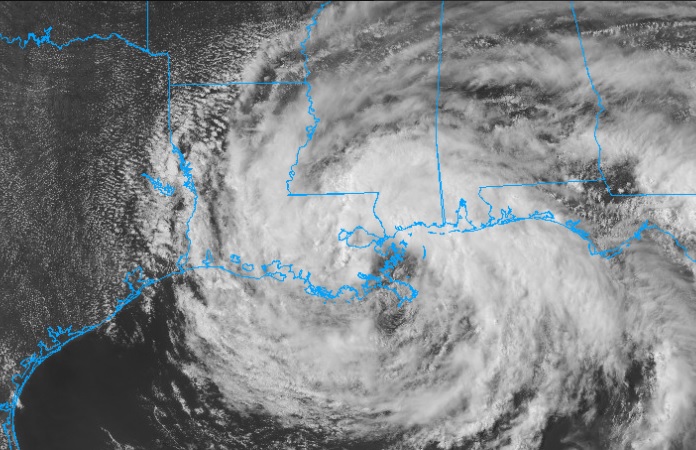 Sadly, but not surprising, SPC has greatly expanded the risk area for spin-up tornadoes from Cristobal Monday to include much of the state. In fact far west AL is under a level 2 risk. Tropical tornadoes are very common east of the track of most landfalling tropical systems 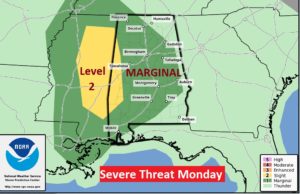 Good morning!  Cristobal is 50 mph Tropical Storm, located only 140 miles from the mouth of the Mississippi River (4AM Advisory).  It’s moving north at 12 mph.  It will reach the Louisiana coast later today, and then curve northward toward Arkansas Monday.

Although Cristobal is not a strong Tropical Storm, it has a rather large wind field.  Here in Alabama, especially from US 80/I-85 southward, locally heavy tropical downpours are likely.  As you will see on the maps below, winds could reach 30+ MPH here in central Alabama and 40-50 mph gusts appear likely on the coast.  A tropical Storm Warning continues on the Alabama coast, eastward to near Destin.

The effects from Cristobal, locally will continue through Tuesday, as the large tropical plume or tail continues to drench the area.  Then, on Wednesday, an approaching front will bring more showers and storms. 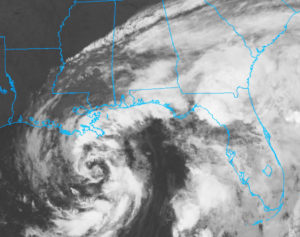 The 4AM position was just 40 miles from the mouth of the Mississippi, moving northward toward the Louisiana coast at 12 mph.  Maximum winds are still 50 mph.  Little change on strength is expected before landfall later today. 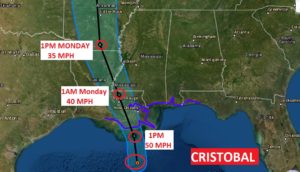 Cristobal will move into Arkansas Monday and northward through the Mississippi valley Tuesday and Wednesday and then into the Great Lakes. 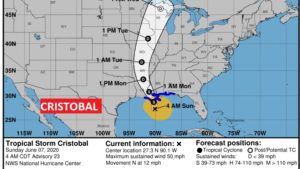 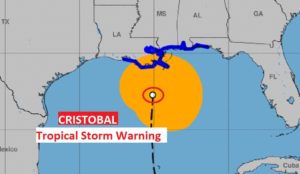 Expected rainfall here in Alabama, will vary widely from 1-2” near the Georgia border, to over 5” along the Alabama coast line. 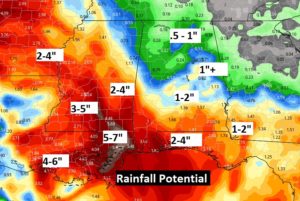 Spin-up tornadoes are a part of all landfalling tropical systems.  Notice the threat area today.  It covers parts of SW Alabama and coastal sections of the Florida panhandle.  Monday, the tropical tornado threat shifts generally into Mississippi, but we can’t rule out a tornado or two in western Alabama.

Winds could easily gust to over 30 mph here in central Alabama on Monday.  Wind gusts on the Alabama coast could gust to 40-50 mph. 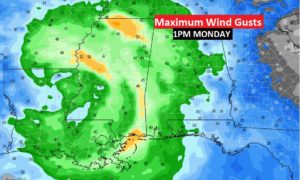 NEXT FEW DAYS:  Rain probabilities will remain high Monday through Wednesday.  Monday and Tuesday, Cristobal will be the rainmaker.  Wednesday, an approaching front will bring a round of showers and thunderstorms.  Drier air and sunshine arrive Thursday and Friday. 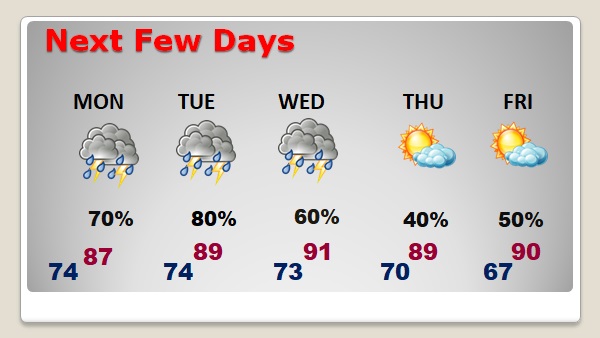 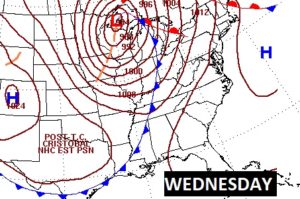 I’ll be watching radar carefully today.  I’ll have additional updates as needed.  I’ll have a complete video update for you tomorrow morning.