Skip to content
1PM NHC Special Advisory:
Marco weakens to a minimal tropical storm. Tropical Storm Warning has been cancelled for the Gulf Coast. Marco is moving NW at 6. It will weaken to a Depression tonight, and a remnant low tomorrow. #Marco 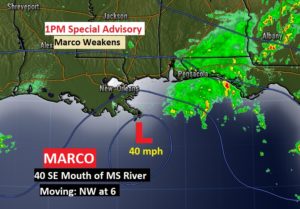 10AM UPDATE:  Marco is very disorganized and weakening. Located 55 SE of the mouth of the MS river, moving NNW 8. Winds now 50 mph. Expected to weaken to a depression tonight and a remnant low tomorrow as it slides along the Louisiana coast. #Marco 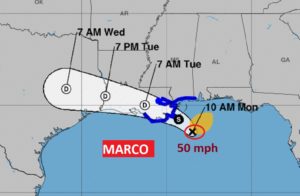 Tropical Storm Laura, with winds of 60 mph, is located south of Cuba moving WNW at 21. It will become a hurricane over the Gulf tomorrow, and could become at least a Cat 2 hurricane before landfall along the Northwestern US Gulf Coast Wednesday night or early Thursday 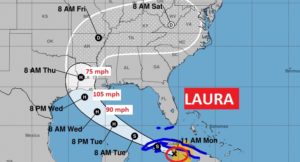 Folks along coast are preparing for an encounter with Tropical Storm Marco today.   Some of Marco’s rain bands will effect our state today.  But, Marco is just the appetizer.  Laura will be a much bigger deal for the United States Gulf coast later this week.  Could Laura become a major hurricane?  I have the latest from NHC, and I have adjusted our forecast for the week ahead through Saturday.

Marco is nearing the Gulf Coast.  Laura is now getting stronger, back over the warm waters of the Caribbean. 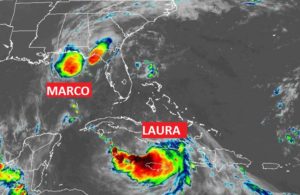 Marco is looking a little ragged this morning.  It’s being affected by wind shear. 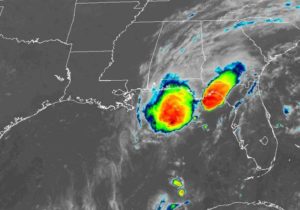 Marco, with 60 mph winds is clearly becoming weaker as it moves NW at 9.  Tropical Storm Warning from the AL/MS line westward into Louisiana, as the storm skirts the coast today, tonight and Tuesday. 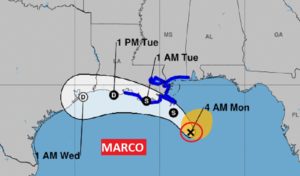 Our weather today will certainly be affected by some of Marco’s rain bands.

Laura will be a much bigger deal to the United States Gulf coast.

Laura is a 65 mph tropical storm in the Caribbean, heading for the Gulf.  Expected to become a hurricane in the Gulf tomorrow.  It could be close to major hurricane status when it makes landfall along the northern Gulf coast Wednesday night. 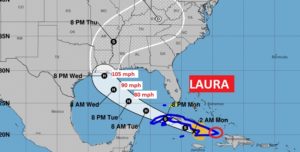 Our daily rain chances for the week ahead are subject to review and certainly dependent on the future track of Laura in the Gulf this week. 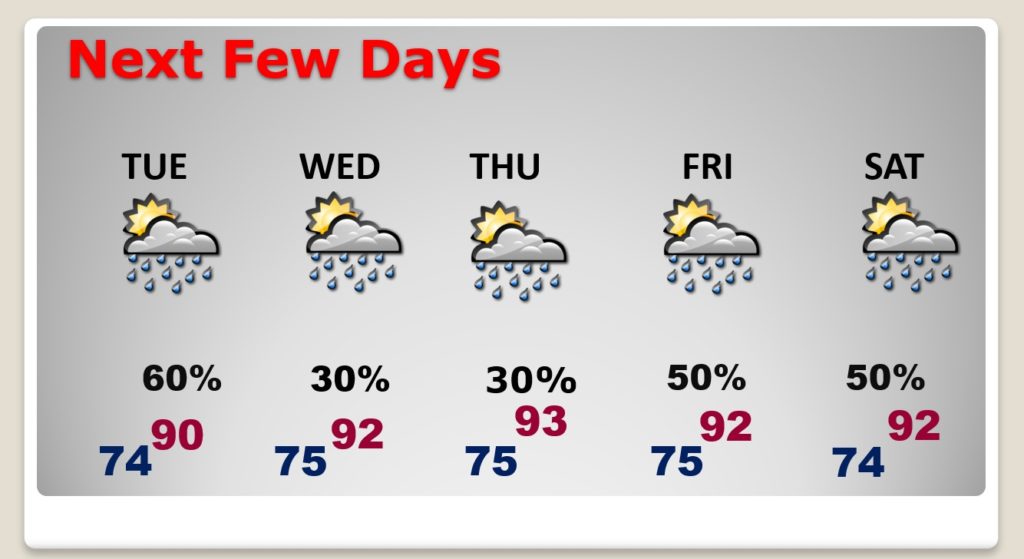