Hold the phone…we are now into the Greek alphabet with Tropical Storm Alpha. But, wait. It’s not that system in the Gulf (TD 22). No. This is a storm off the coast of Portugal heading toward Spain. Next up, could we see “Beta” in the Gulf later this afternoon? CRAZY. 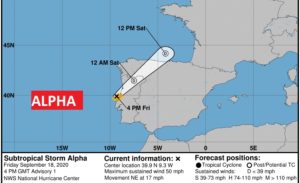 Guess what? Wilfred is born, but not in the Gulf. It’s a tropical storm in the eastern Atlantic with 40 mph winds. We’ve run out of names. That means if TD 22 in the Gulf gets upgraded today, it will get the name Alpha, from the Greek alphabet.

Good Morning!   First the good news.  The last weekend of summer will be very comfortable indeed.  How about highs in the 70’s, and some much cooler nights?  Perhaps lows in the 50’s starting Sunday night.  But, out in the western Gulf, we’re monitoring more Tropical Trouble.  Do we need to worry about this new tropical threat?  Elsewhere, the tropics continue to be very busy.

Tiny rain chance today.  Cooler air is on the way for the weekend! 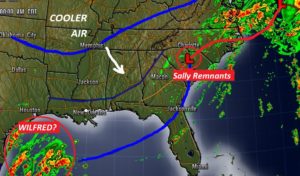 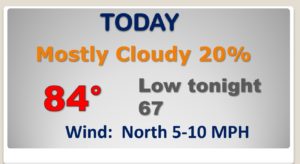 Elsewhere in the tropics…Teddy is a 140 mph Cat 4 Hurricane.  Invest 98-L is likely to become a depression or tropical storm.  And there are two other areas to watch in the eastern Atlantic. 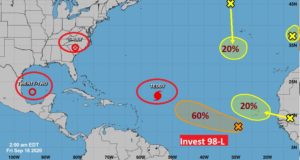