It’s been more than 2 months, for most of us, since the last significant rain. We are in an extreme drought.  Now, it appears, a major storm system will produce some impressive rainfall totals across the state, and maybe some severe weather, sometime between Monday night and Wednesday.  The details are still emerging, and the models do not agree on the details.

SHORT TERM:   Mostly cloudy this morning. Patchy fog has been dense in spots.  A weak front is stretched across the state.  This front will get a “push” later today, which will allow cooler air to filter in by Iron Bowl Saturday. After 82 on Thanksgiving, look for upper 70’s today, Mid 40’s tonight and upper 60’s on Saturday.  At the Iron Bowl in Tuscaloosa, game time temps from 66 at Kickoff to upper 50’s at the end.  Perfect football weather. Sunday:  Mostly sunny and nice.  High near 70.

NEXT WEEK:  Significant Storm System:  Models do agree that we will see an important storm system with generous rainfall amounts. But, the details vary widely from the GFS and Euro on strength, timing, severe weather threat, and where the heaviest rainfall will be.  The rain will come in multiple waves.  The Euro appears to be fastest with part 1 arriving Monday night, while the GFS is about 12 hours slower.

Below here’s an example of the timing differences on “round one” between the GFS and Euro models.

RAINFALL AMOUNTS:  Look carefully at the maps below.  Models vary widely on how much rain and which part of the state could see the most rain.  It would be ridiculous for me to speculate.  And, I won’t.  But it’s clear that some folks could see some very beneficial rain totals, others not as much.

SEVERE THREAT:  Again the models do not agree on the potential severe threat and when the highest threat will be.  Placement of the storm system “pieces” will determine how the threat will play out.  Could be as early as Monday night, with the first round of storms.  A marginal severe weather threat would bring a threat of mainly wind damage, with isolated tornadoes not out of the question.  Details are fuzzy right now stay tuned.

NEW DROUGHT MONITOR:  This is about as bad as it gets.  82% of our state is now in a Stage 4 Severe Drought, and 35% in a Stage 5 Extreme Drought.  The statewide No Burn order remains in effect.  Drought emergency. 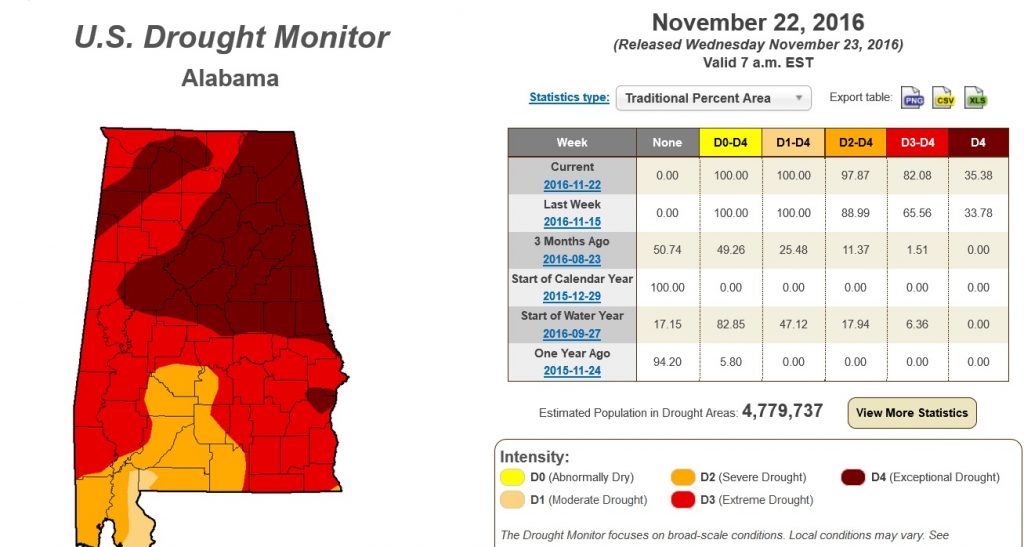 Have a great holiday weekend.  I’ll keep you up to date with the developing details as we keep watching the approaching storm next week. The big news is a four letter word called R-A-I-N!