We’ve been here before.  In fact, it hasn’t been that long.  When the Arctic Cold Front yesterday, it dropped temperatures 30 degrees from the day before…from mid 70’s to the mid 30’s.  We’re back in the 20’s this morning, and the coldest days and nights are still ahead of us.  A second arctic front arrives Tuesday evening.  To snow or not to snow?  That is the question.  One model is more bullish than the others. Details below.

TODAY:  A raw winter’s day is on the menu.  Breezy and cold.  Clouds will erode away as drier air moves in.  Our high will struggle to reach 41.  But, northwest wind at 10 to 20 mph will add insult to injury.  Wind chills will remain in the teens much of the morning and mostly 20’s this afternoon.  Tonight will be rather frigid.  The winds die down, but the overnight low will reach 22 by dawn.

NEXT FEW DAYS:  Sunday won’t be as windy.  That’s a plus.  Highs may reach the mid 40’s, followed by mid 20’s Sunday night.  Many folks are folks Monday for the MLK holiday.  Southwest winds will take us into the 50’s, which will feel nice!  Another Arctic Front sweeps across the state Tuesday.  Behind it, Tuesday night and Wednesday will simply be brutally cold.  Lows by dawn Wednesday could sneak down into the mid teens with single digits (or lower) wind chill.  Right now, I have a 30% chance of  snow on Tuesday.  More on that scenario below. 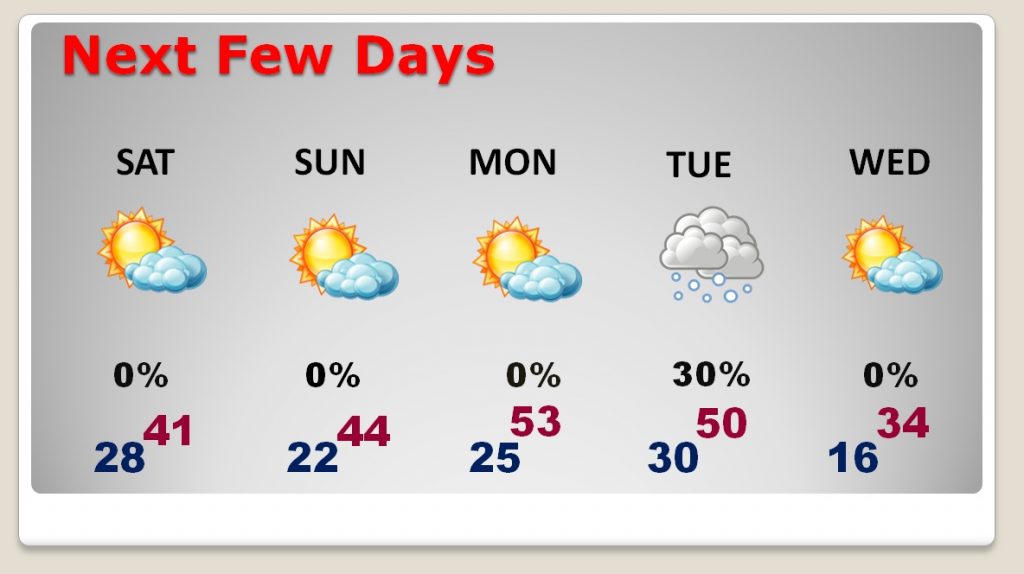 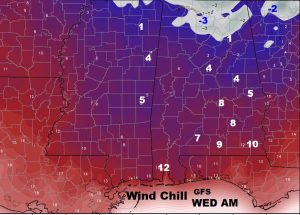 TUESDAY – SNOW RISK:  There won’t be much moisture available to work with on Tuesday, but there might be just enough.  First, the arctic front moves through, then moisture rides up and over the top of the cold air.  Snow is certainly not out of the question.  Right now, the GFS favors some light snow across north Alabama, but it fades the snow, quickly, as it gets into central Alabama.  The Euro model shows slightly more moisture.  It’s the most bullish on the snow chances across central & south Alabama.  It even tries to paint a very slight accumulation.   The other hi-res models don’t go that far into the future yet.  So, for now, because of the discrepancy in the model solutions…as a forecaster, I’ll be cautious.  Snow is possible.  I’ve got a 30% chance in right now.  But, as I look at more data today and tonight, (and before your Sunday morning Blog is published)  I certainly may adjust my forecast.  It wouldn’t take much moisture to potentially turn this into a “high impact” situation.  Stay tuned.  Right now, though, I wouldn’t rush in a clean the store out of milk and bread.  🙂

The big story is the COLD with this front, not the snow threat, YET.  Below…here’s a snapshot of the GFS at 6PM and Midnight Tuesday and the EURO at the same hours.  (blue is snow)   I prefer not to show the map with potential accumulation. 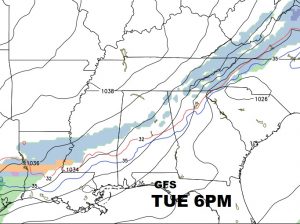 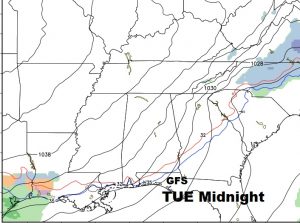 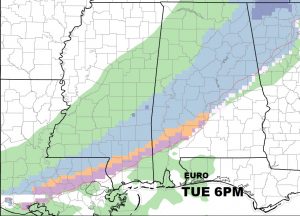 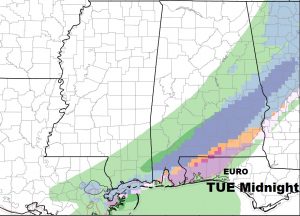 LOOKING AHEAD:  Hang on.  After this cold episode through Thursday, the models agree.  The cold will retreat, and we will get into much warmer temperatures for about the last 11 days of January and in through perhaps, at least, the first week of February.  Stand by.  We had a 3 day “thaw” this week which was a tease.  But, this next thaw will be much more pronounced, and significant and long lasting.   Be patient, it’s coming.   Here’s the raw temperature guidance from the Euro and GFS.  Don’t take specific numbers litterally.  We’re just looking at trends. 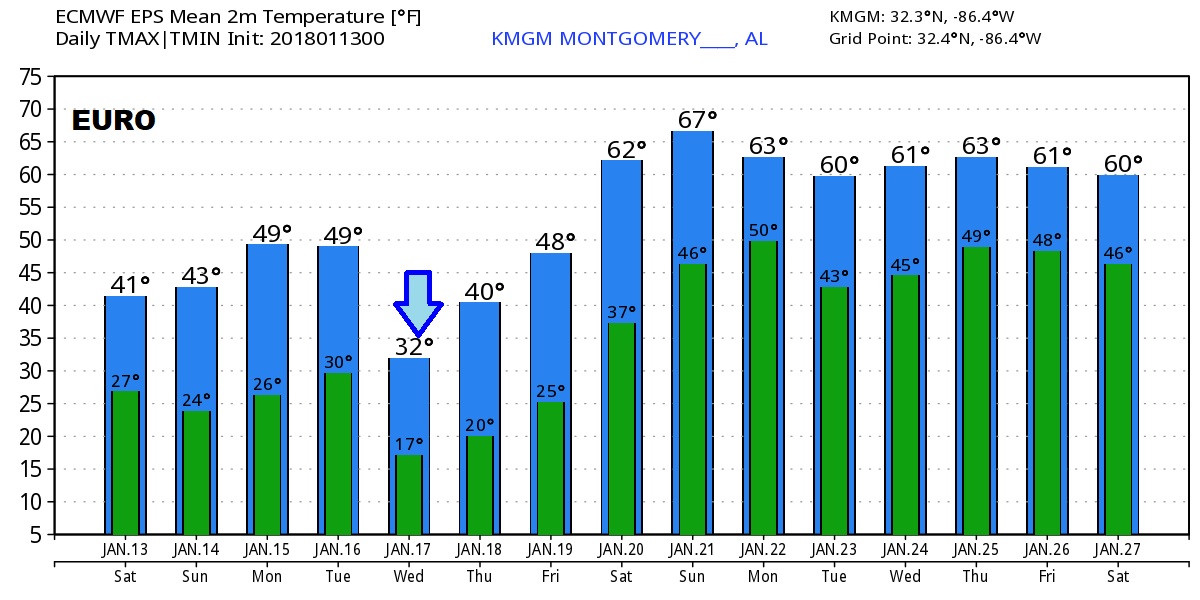 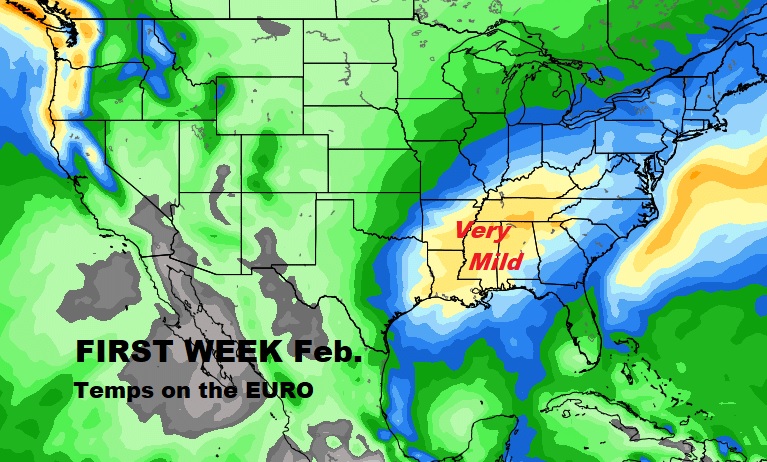 Stay warm.  Dress in Layers!  PLEASE make sure you bring your pets!  They need a warm space during the extreme cold.  I’ll have another Blog update Sunday morning, as we explore new model data, ok?