It’s a frigid Sunday morning with lower 20’s deep into south Alabama, and wind chills in the teens.  North Alabama is even colder with temps. In the mid teens and single digit wind chills.  Dress in layers. It’s going to be a cold Sunday.  We’ll see a minor temperature recovery, and a pretty nice MLK holiday tomorrow.  But, don’t look now.  Here comes another Arctic Cold surge sweeping across the state Tuesday.  Everybody wants to know…will there be any snowflakes Tuesday night.  I’ll give you my thoughts below.  It’s not out of the question.

TODAY:  Sunshine will dominate.  Not as windy as yesterday and we should be about 8 degrees warmer than Saturday.  High near 46.  Tonight, another Deep Freeze with a low in the middle 20’s

NEXT FEW DAYS:  Many of you are off tomorrow for the MLK holiday.  Our expected high of 54 will feel like a heatwave.  We’ll be in the low 50’s at least early in the day Tuesday, before temperatures start to tumble again as the Arctic Front sweeps southward.  I’ll address the snow threat in a moment.  But the big story is the cold.  We’ll be in the teens Wednesday and Thursday morning and Wednesday’s high will barely reach the mid 30’s at best. 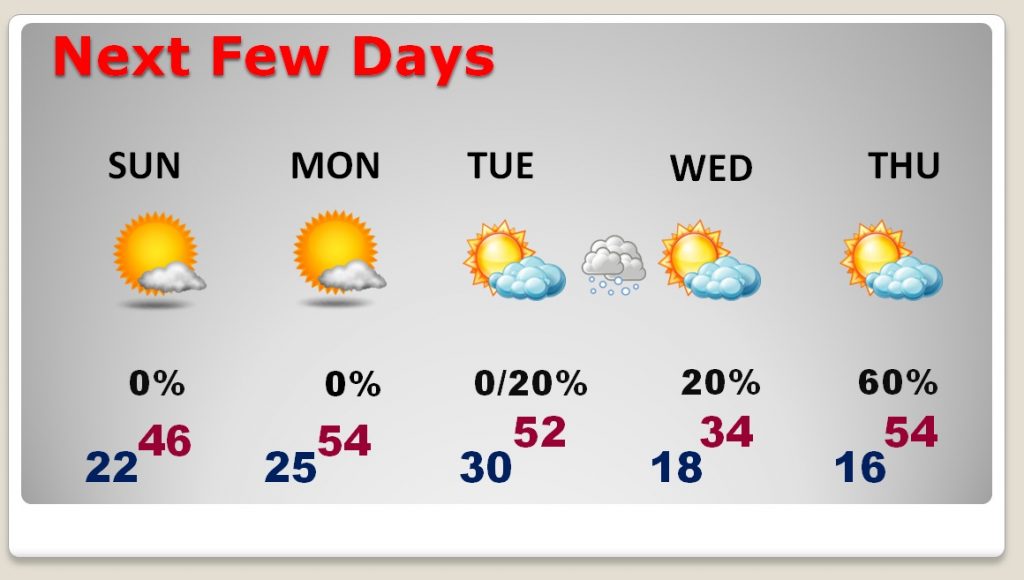 Here’s a snapshot of the map at 6AM Tuesday, with the front already into north central Alabama, and snow behind the front. 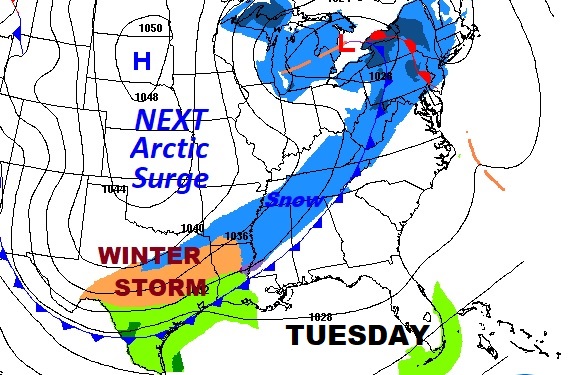 TUESDAY – SNOW RISK FADING?:  There is still a chance of some snowflakes late Tuesday night & Wednesday morning, but the situation is complicated and very “IFFY”. I have taken the probability down to 20%, based on what we know.  The GFS has totally backed away from the snow idea this far south. It shows nothing.   The North American Model (NAM) shows a small chance, of a tiny ribbon of snow making it into the I-85 corridor, but it completely loses the precip. by Wednesday morning.  The Euro is now alone in its “bullish” approach.  It shows a band of light snow into the I-85 corridor late Tuesday night and across south Alabama Wednesday morning.  The Euro shows little or no accumulation. Here’s a couple of the models side by side.  First the NAM, and then the EURO. 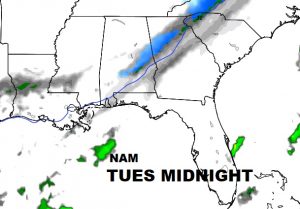 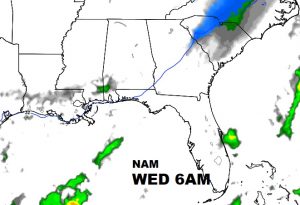 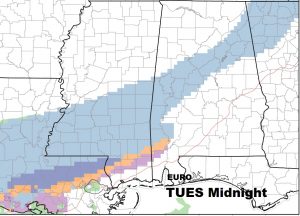 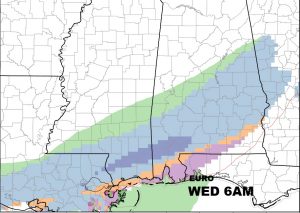 Here’s an interesting product called  “WPC Probabilistic Winter Precipitation Forecast”.  This is not a forecast per say.  It shows at least a “probability” of perhaps an inch of snow north of Birmingham, and perhaps a Trace as far south as Birmingham and Clanton.  Temperatures will certainly be cold enough for accumulating snow. 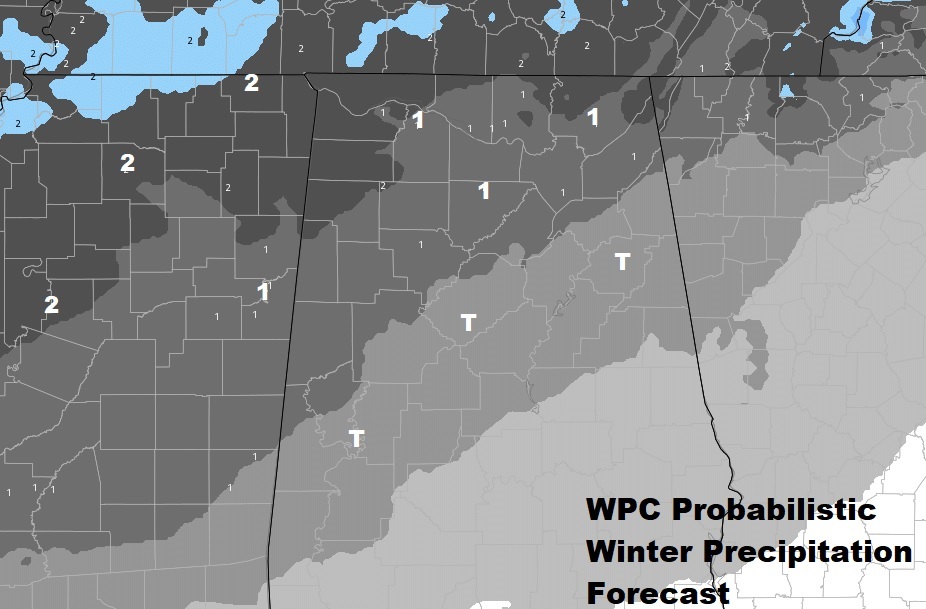 Could this scenario change?  Sure.  We’re still 72 hours from the event. Join me tomorrow morning and we’ll explore all of this again on my Monday morning weather video. For now, I wouldn’t run out an buy a snow shovel.

LOOKING AHEAD:  After the brutally cold mid-week arctic outbreak, the model agree on a big warm-up next weekend, which will likely be the start of a pronounced, and a apparently long lasting “Thaw” which will take us through the last 10 days of January and perhaps a week or two into February.  That would be nice!  Hang on.. 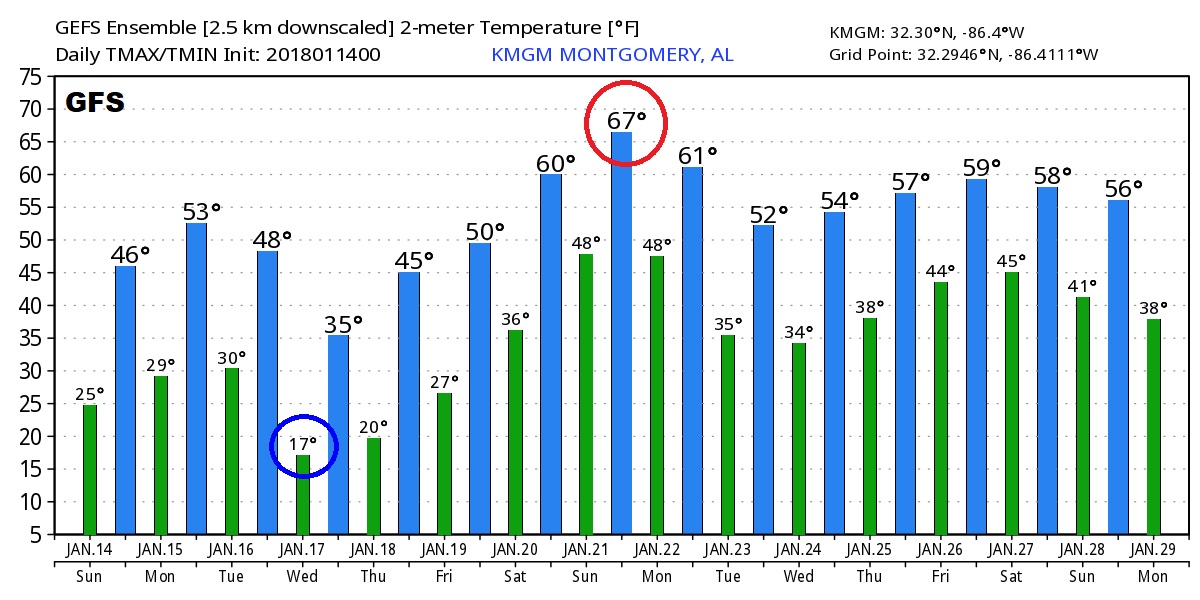 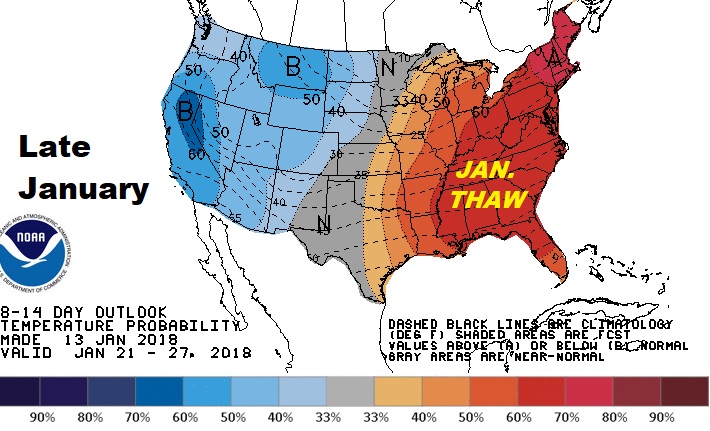 PLEASE make sure you bring your pets during this cold weather!  They need a warm space during the extreme cold.  I’ll have a complete video for you tomorrow morning.  My alarm goes off before 2.  Your video will be online by 4:45AM.

Have a great Sunday!