..Upgrade from a Watch to a Tropical Storm Warning along the northern Gulf Coast from east of Panama City west to the Mississippi/Alabama border.  Also, part of the west coast of the Florida Peninsula also under a tropical storm warning…  Tropical Storm watch west of the MS/AL line to the mouth of the Pearl River.

At 4PM the Center of Sub-tropical Storm Alberto located about 95 south of the west tip of Cuba moving north at 13.  Pressure is down a bit to 999 millibars.  Alberto will over the eastern Gulf through Sunday night, and approach the northern Gulf coast on Monday morning.  But, heavy rain and tropical storm conditions will reach the northern Gulf coast well before the arrival of Alberto.  Here’s the new forecast cone.  The potential track has been nudged eastward, again, just a little bit. 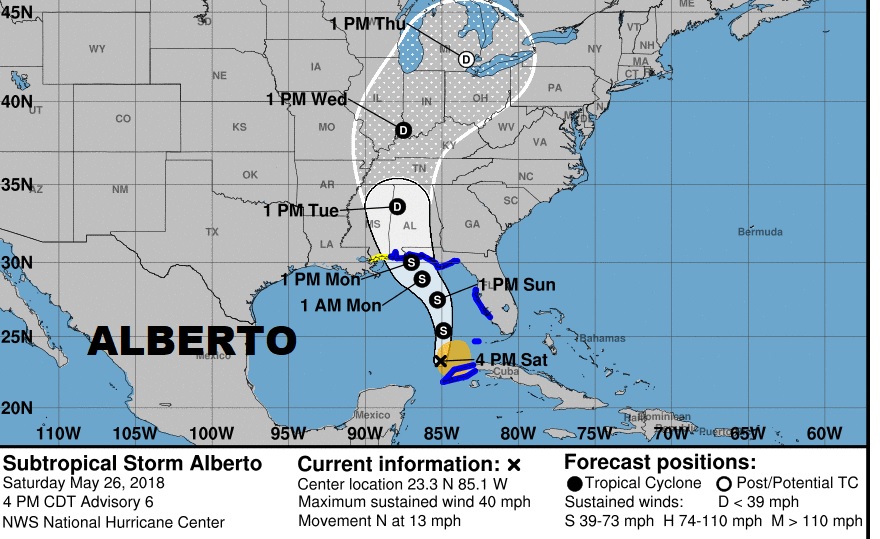 Gradual strengthening is expected.  The storm could have 65 mph winds as it approaches the coast.  A transition from sub-tropical to tropical should take place in the eastern Gulf Sunday.  The storm will lift northward through west Alabama Monday afternoon, Monday night and Tuesday. 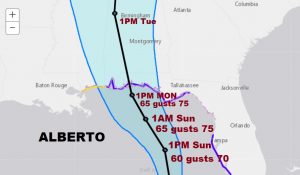 RAINFALL POTENTIAL:  Excessive, potentially flooding totals are possible over the next few days.  On the coast, amounts of 6-9” are a good bet, with 3-5” amounts into central Alabama.  Locally heavier amounts are possible. 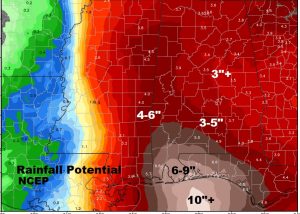 I’ll keep you up to date all weekend, as we continue to monitor this Tropical Threat.  I’ll have another update  Sunday morning by Dawn