Again today, the stage is set for an active storm day, as a stalled frontal system draped across the southern half of the state acts as a focus for scattered to numerous showers and storms.  The up and down rain chances will continue next few days.  While there may be fewer storms Monday and Tuesday, overall, the general pattern of scattered to sometimes numerous storms will be in place for the next few days.  It appears we will return to the middle 90’s with triple digit heat indices by mid to late week. 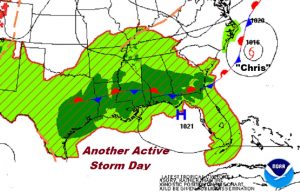 TODAY:  Random, scattered showers and storms will get a good start by about lunchtime, or thereabouts.  They will reach a peak by late afternoon and early evening.  Today’s high should reach about 90, with a low tonight in the lower 70s.  Showers should fade out overnight.

FUTURE RADAR:  Here’s a few future radar snapshots, from Noon, 3PM and 7PM.  Although all areas will see showers, the favored part of the state for the greatest coverage appears to be the west and SW counties.  Coverage in all areas will be rather generous.  Some of you had some nice rainfall totals yesterday, while other towns…not so much. 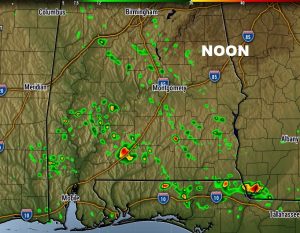 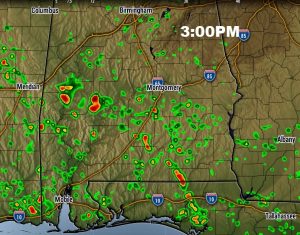 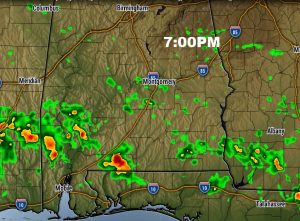 NEXT FEW DAYS:  The general pattern of scattered to sometimes numerous storms will be in place for the next few days.  It appears we will return to the middle 90’s with triple digit heat indices by mid to late week.   No big day to day changes are indicated. 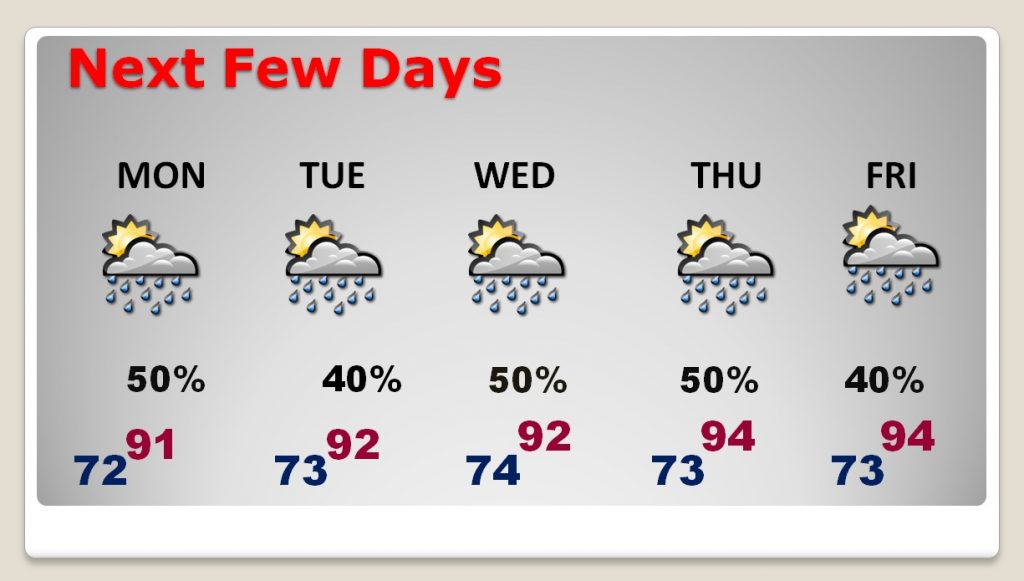 BEACH FORECAST:  While it is generally a routine beach forecast, as has been the case for the last few weeks, showers and storms are a little more numerous than on a typical summer days.  The rip current risk is listed as low. 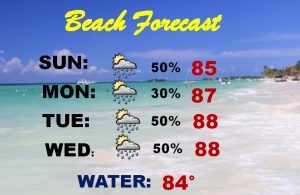 TRACKING THE TROPICS:   The National Hurricane Center is monitoring two tropical storms – Beryl in the tropical Atlantic approaching the Islands, and newly named Tropical Storm Chris off the Carolina coast. 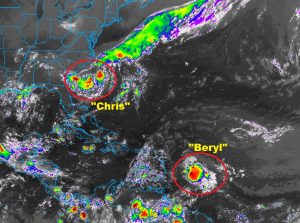 BERYL  weakened to a tropical storm yesterday.  Tropical storm warnings are in effect for parts of the lesser Anilities.  The storm is moving rapidly WNW, with 45 mph winds.  An Air Force RECON is currently en route to get a better assessment of the storm’s strength. 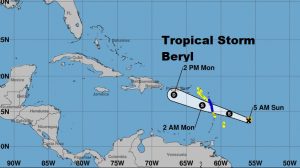 CHRIS: Air Force RECON investigating this system has found 45 mph winds.  Therefore, TD3 is promoted to tropical storm Chris.  Chris will meander off the North Carolina coast for a couple of days before accelerating NE.  It could become a hurricane as it crosses the warmer waters if the Gulf stream. 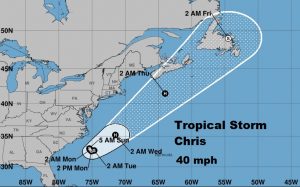 Have a great Sunday!  I’ll have a complete video will be Monday morning by 4:45AM.