Every place I went yesterday, people were talking about one thing…SNOW.  Will it snow on Tuesday?  YES.  Could it possibly accumulate at your house?  It depends on where you live.  As far as time duration, the snow will be rather brief.  Two to three hours at most.

In some parts of our state, this Snow Event has the potential be a big deal. Especially, from I-20 northward, some of the models suggest 2-3 hours of moderate to heavy snow, with temperatures cold enough for possibly significant totals.

But, this morning, more than ever, the models are in terrible agreement on how this may all play out.  I’ll explain more below.    The other side of the coin is the wind and the cold.  Temperatures will fall all day.  Wind chill will reach the teens by evening.

TODAY:  With disturbances passing to the south and north of us, there will be clouds from time to time.  I’ll call it partly sunny.  The high should reach the upper 50’s.  (Montgomery had a high of 57 Saturday)   Tonight: Partly cloudy.  Low 34.

TUESDAY’S SNOW EVENT:  An arctic cold front enters the state after Midnight Monday night.  By 6AM, it will reach a Auburn/Troy line.  Most of the precipitation and drama is behind the front.  Here in central Alabama, rain should become mixed with snow fairly early – perhaps as early as 8-9AM.  Between about 10AM and Noon it should be just snow.  After lunch the chances of snow shift briefly to south Alabama, before the precipitation races out of the state.   Here’s a peek at the GFS model forecast at 6AM and Noon. 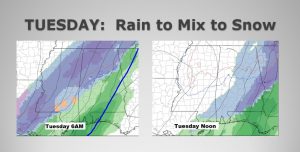 POSSIBLE ACCUMULATIONS:  To a lot of folks, the snow doesn’t matter unless it accumulates.  So, a lot of folks may end up disappointed, from the I-85 corridor southward.  The forecast is still evolving though, and there could still be some surprises.  Let me walk you through 3 or 4 model ideas.  You’re going to see that the models are all over the place.   FIRST, here is the National Weather Service manual forecast…which blends the model ideas.  This is the most plausible scenario…with a possible dusting of snow as far south as I-85, about 1.5 inches in Birmingham and heavier amounts possible north of I-85.  A Winter Storm Watch could be issued for parts of the state by this afternoon. 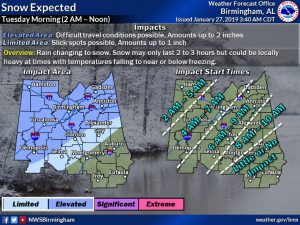 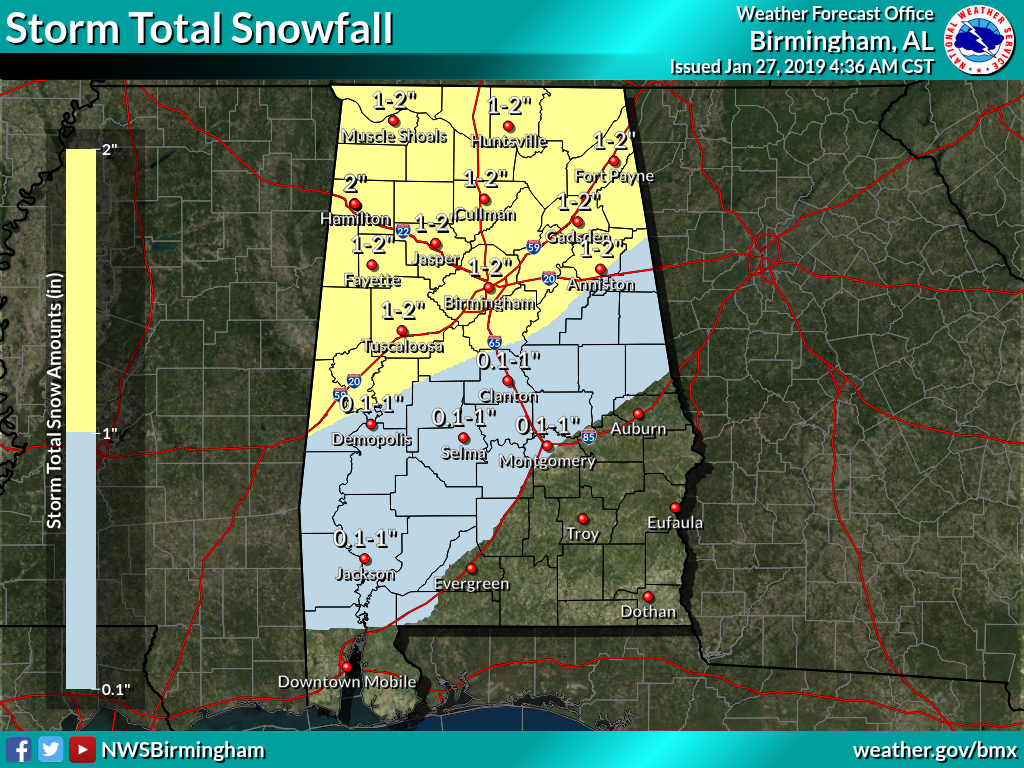 The American GFS has been most consistent with it’s forecast, giving  the northern 1/3 of the state the best chance for accumulation .  The EURO model suggests smaller amounts, and mainly from I-20 to I-85.  There’s no agreement on these models at all. 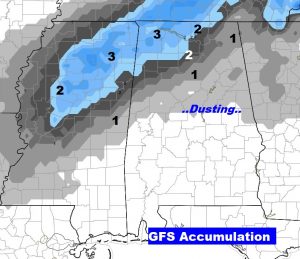 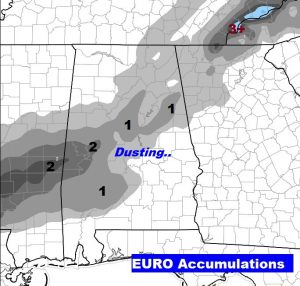 The North American Model (NAM) has been the most bullish on the snow idea.  It advertises possible “convective bursts” of heavier snow, especially in north Alabama.  It prints out 2+ inches in spots generally north of I-20.  It suggests a dusting as far south as I-85.  This higher resolution model does a nice job with situations like this.  For instance, on December 8, 2017, the NAM was the only model that correctly projected that band of heavy snow which blanketed areas as far south as Autauga county with six inches.  We’ll be watching future runs of the NAM for possible Tuesday surprises.

Here’s an interesting map from WPC in Washington. This map shows the probability of 2 inches of snow or greater on Tuesday. That brown area indicate 1 to 5% chance. Notice how the probabilities increase the farther north you go in the state 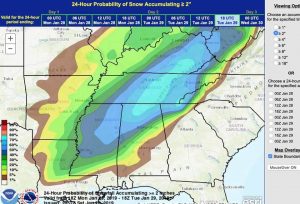 POTENTIAL FOR ICY ROADS:   I think one issue that we’re going to have to keep our eyes on, after the snow ends, is any remaining moisture that could be left on the highways. Obviously that would freeze by sometime Tuesday evening Tuesday night and Wednesday morning. Bridges and overpasses would freeze first, followed by roadways. I don’t expect the icing to be widespread here in central Alabama, however there will be some icy spots, and that could make driving hazardous.

WINDY AND MUCH COLDER:  The extreme cold which will edge into the United States will make a lot of headlines.  The core of the cold will stay north of Alabama.  The worst of the extreme could will be over the Midwest and Great Lakes, where some wind chill readings will reach the -40’s and -50’s.  Life-threatening cold.  Here in Alabama, wind chill will fall to the teens Tuesday night and Wednesday morning.  The actual low will reach 20-23° by Wednesday morning.  Get ready! 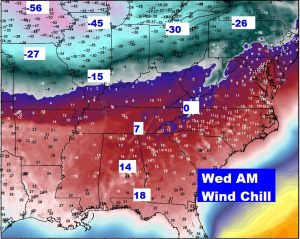 NEXT FEW DAYS:  Monday will be the warmest day with a high in the low 60’s.  Tuesday, the snow day, will be windy and cold with falling temperatures.  Temps will fall to the 30’s by mid-day.  We’ll fall to the 20’s Tuesday night and Wednesday night.   Highs on Wednesday and Thursday will only be in the 40’s. 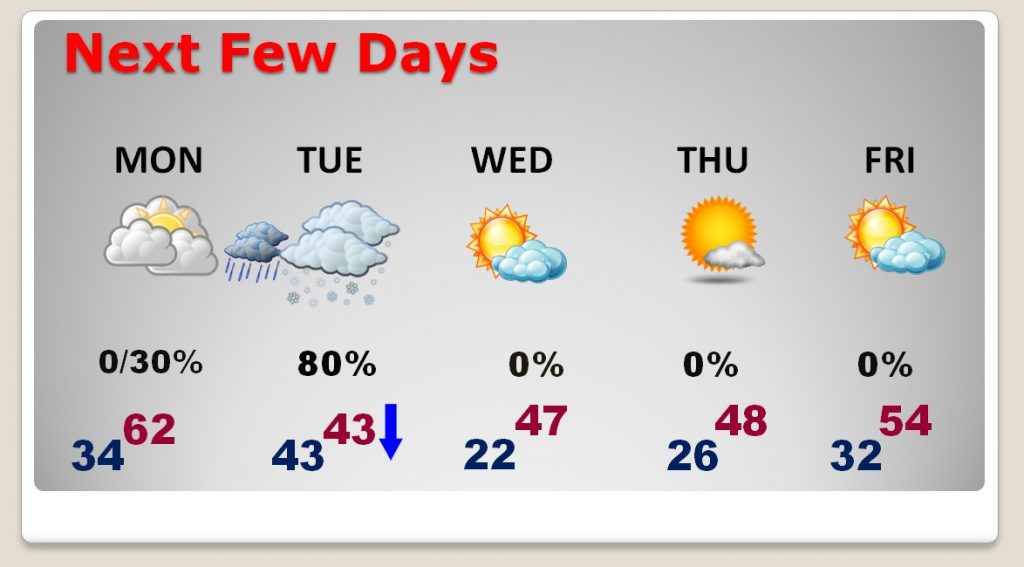 TUESDAY HOUR BY HOUR:  Using Montgomery as a reference point, rain could become mixed with snow as early as 8-9AM, then changing to all snow for maybe a couple of hours before ending about lunchtime.  Windy and colder with falling temperatures.  Winds will be gusting to 25 mph or higher for much of the day and into the evening. 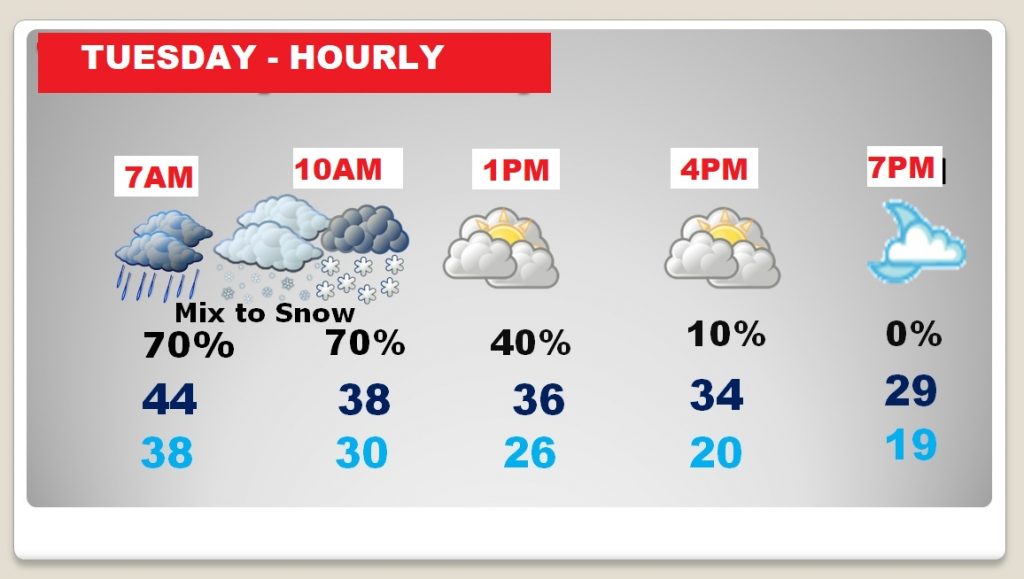 I’ll be looking at a lot of new computer model runs today.  We’ll see if there’s any new revelations about Tuesday. I’ll let you know if there are any new developments.  I’ll also be on a webinar with NWS at 10AM.

I’ll have a complete video update Monday morning at 4:45AM!