3:00PM UPDATE:  ROUND ONE OF THE SEVERE WEATHER…

Tornado Watch covers much of west and central Alabama until 10PM.  The Watch extends as far EAST as Chilton and Perry County.  Additional watches are likely later.  Stay weather aware.  Warnings have been underway since around 2:30PM.  The severe threat in Alabama continues for several hours until perhaps 3 or 4 AM in south central Alabama. 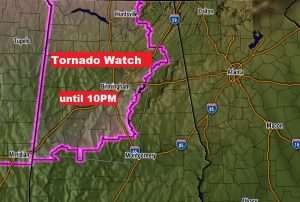 A potentially very dangerous situation is setting up, especially in the northwest quadrant our state by this evening and tonight, including the threat of significant tornadoes.  While the threat is highest north and west of I-20/I-59, there is a Marginal Threat by later tonight and into the wee hours of the morning as far south as the I-85 corridor, as a line of strong thunderstorms progresses southward.  Although not as dangerous, there is at least a risk of a brief tornado or two as far south as the River Region by late tonight.  The rest of the news about today involves record heat.  Montgomery had a record high of 86 yesterday and it looks very likely that we’ll see another record today.  That’s fuel for the fire when it comes to severe storms.

TODAY:  Breezy, warm & humid.  There will be a sun/cloud mix, but potentially more clouds than sun.  The Montgomery high may reach 84.  That would break the record of 83 from last year.  Can’t rule out some spotty, random thunderstorms this afternoon & this evening.  Looks like a pretty good forecast for Mardi Gras celebrations today in Millbrook and Montgomery.

All the big action with the squall line happens late tonight.  More below.

SEVERE RISK BY EVENING & TONIGHT:  The Storm Prediction Center has a level 4 Moderate Risk for parts of north Mississippi and extreme northwest Alabama.  Much of northwest Alabama is in the Enhanced Risk, with a Level 2 slight risk all the way down to a Clanton/Selma line.  A Marginal Severe risk extends as far as, roughly a Alex City, Montgomery, Greenville line. 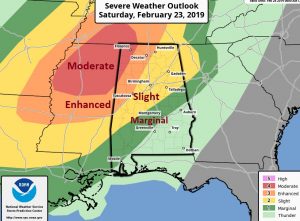 The National Weather Service in Birmingham extends the risk a little father.  It extends as far east as Auburn and the southern tip of Montgomery county through about 3AM, and I think this is very plausible. 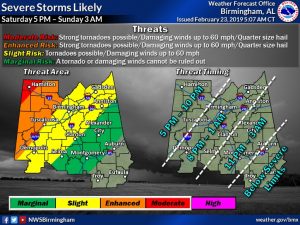 All modes of severe weather are possible, including a risk of “significant long-tracked” tornadoes, particularly in the enhanced and moderate risk areas.  Large hail to 1” in diameter or larger, and 70+ wind gusts are also likely.  Farther south, in the Marginal risk area, the threat begins to diminish.  Here’s a few Future Radar snapshots.  Let me point out…we’re not just tracking the prominent line of thunderstorms.  Ahead of the line, especially in NW Alabama, individual super-cell thunderstorms will pose a significant tornado threat, perhaps beginning as early as 5PM.  Very often, these are the most dangerous tornado producers.  Tornadoes are also possible with the line of storms, along with the hail threat and damaging wind threat.  The “squall line” will be in a weakening stage when it reaches near I-85/I-65 intersection by late tonight, but the storms will probably still have a severe weather potential. 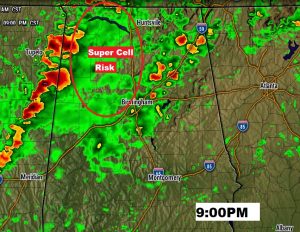 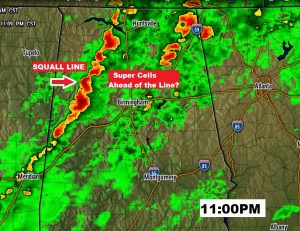 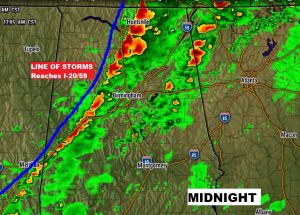 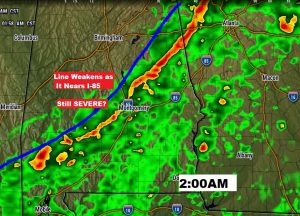 NEXT FEW DAYS:  The risk of showers will be around until early Sunday morning, but then, there will be improvement by mid-day and afternoon Sunday.  It should be a nice afternoon.  Monday, and much of Tuesday look picture-postcard perfect.  There could be some more showers by mid week as a Gulf disturbance brushes by the area. 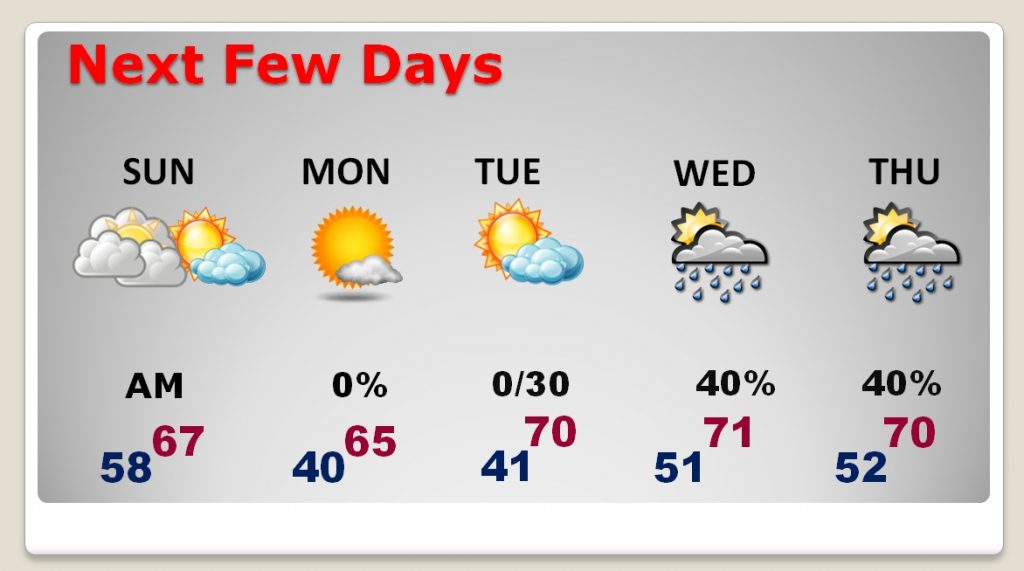 Stay weather aware, particularly tonight, as the line of strong storms moves southward.  Make sure you have our weather app handy and your weather radio is in the alert mode, so that it can wake up if a warning is issued for your area.