In the wake of yesterday’s drenching rain from Nestor, we will get a nice break today, between storm systems.

Morning clouds give way to improvement later.  But, more changes are on the way.  A strong cold front will move through the state Monday night.  There could be some strong to severe storms ahead of the front, followed by much cooler air behind it.  Another front will bring more widespread rain to the area before the end of the week.

MONDAY SEVERE THREAT?:   A band of strong storms could enter west Alabama as early as Noon, and spread eastward across the state.  Late Monday afternoon and Monday evening the stronger storms will move through central and Southeast Alabama.  Much of the state is in a Marginal Severe weather risk. Damaging wind gusts are the main threat.  The tornado risk is small, but not zero.  Here’s a graphic from the National Weather Service, with some timing guidelines on Monday’s threat. 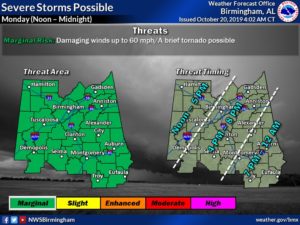 Here’s a wider shot of the whole state from SPC.  It shows a slightly higher threat level across the NW counties, where brief tornadoes are possible. 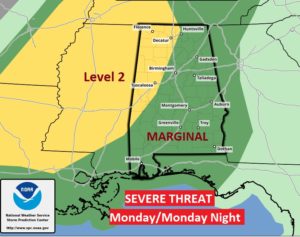 NEXT FEW DAYS:  After the front, much cooler air will follow.  Sunshine returns by Tuesday afternoon.  The coolest mornings will be Wednesday and Thursday morning when we’ll be back in the 40’s.  Another frontal system will bring more rain to the state Thursday night into Friday, ending Saturday.  There will be some thunderstorms, also.  Too early to say if we will see strong/severe storms with that system. 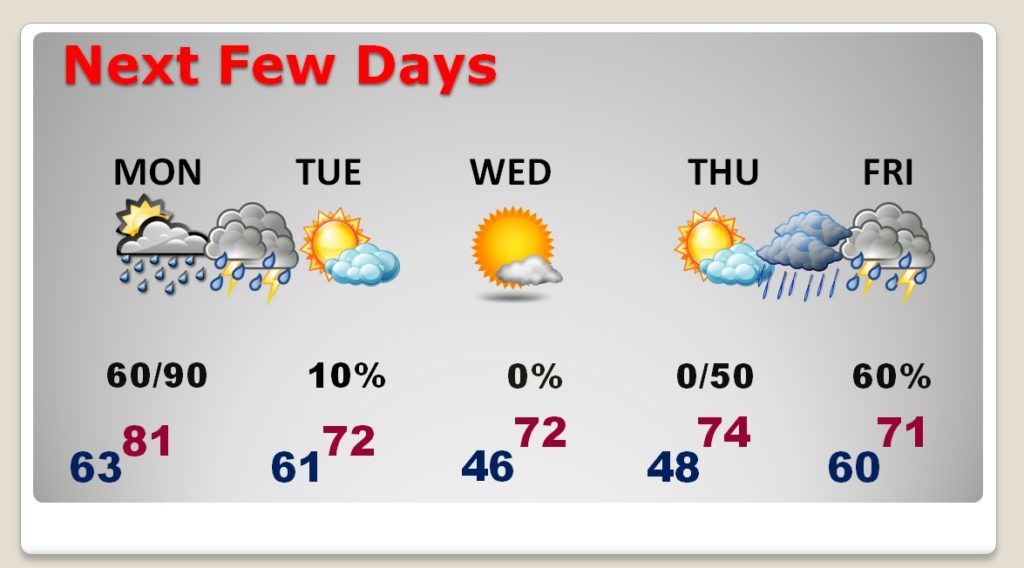 ACTIVE THROUGH THE END OF THE MONTH:  Three cold fronts between now and the end of the month.  We are getting into the much more active months of the year.  Remember, as you look at the Raw temperature guidance from the GFS model…never look at specific numbers.  We are looking trends.