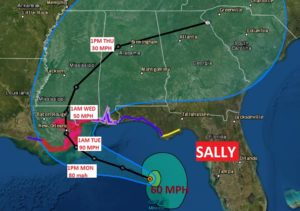 Sally is getting stronger. Air Force RECON reports the winds at 60 mph now. Sally track nudged a little westward on new NHC cone. Expected to become a Hurricane Mon. and make landfall on the northern Gulf coast Tues. It will slow dramatically which will exasperate the storm surge and flash flooding threat. Sally’s winds could be stronger than indicated 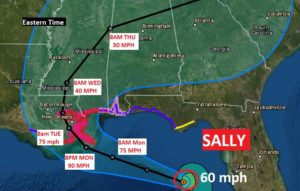 Obviously today’s weather blog will be dominated by Sally, which is a tropical Storm in the southeastern Gulf, bound to become a Category 2 Hurricane before making landfall along the northern Gulf coast on Tuesday.  It will become a slow mover as it approaches the coast and that will exasperate a very complicated forecast.  I’ll do my very best to sort out what we know now, but understand, as the future track and intensity of Sally will changes, the forecast details will also change as we get closer to landfall. 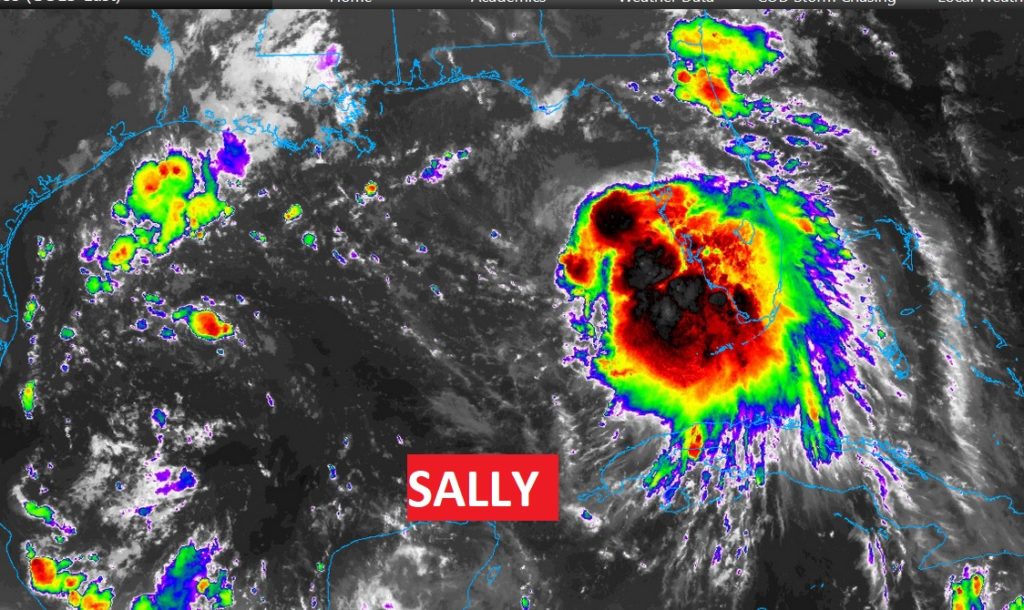 SALLY’S CURRENT TRACK FORECAST:  Sally’s wind s have increased to 50 mph, now 115 miles west of Port Charlotte, Florida moving WNW at 13 mph.  It ‘s expected to intensify in the Gulf.  It is forecast to a Cat 2 hurricane before landfall on the LA/MS coast Tuesday.  Be aware, the intensity forecast is conservative.  It is possible the storms could go into a rapid intensification cycle on Monday.  The storm will slow it’s forward speed as it approaches the coast and that is NOT good news, at all.  Sally is the 18th storm of the 2020 season. 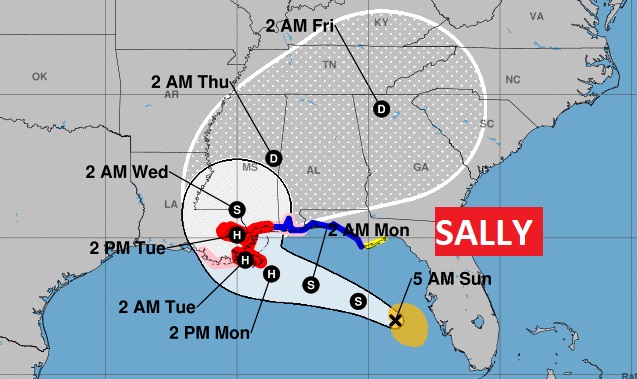 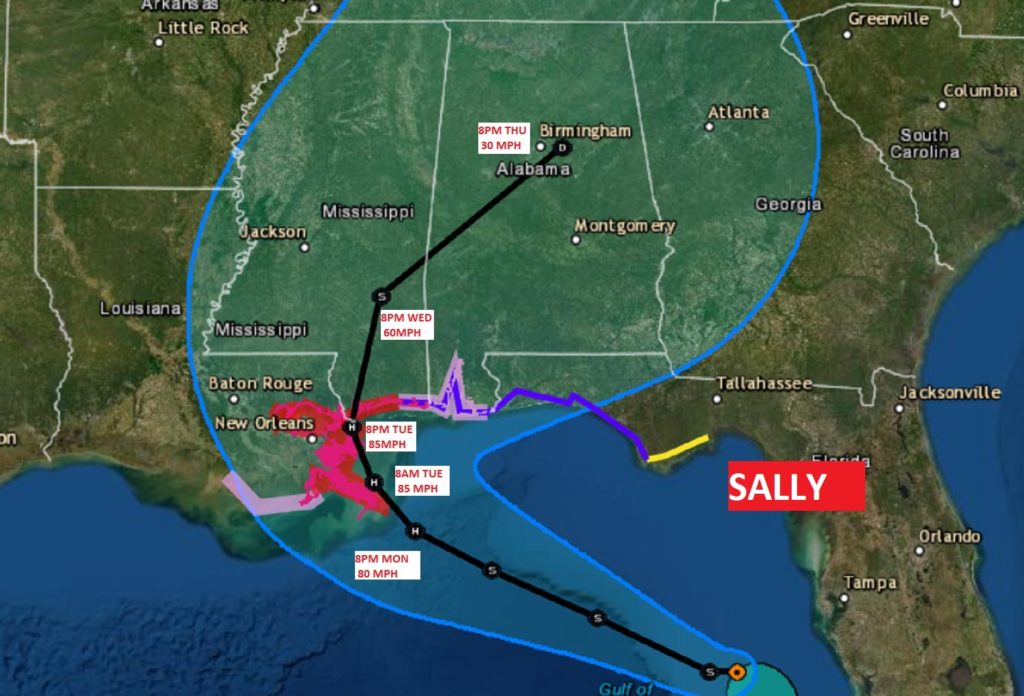 CURRENT WATCHES/WARNINGS: The Alabama Coast is under a Hurricane Watch and Tropical Storm Warning.  The Tropical Storm warning covers the rest of the FL Panhandle.  Hurricane Warning along the LA/MS coast includes the city of New Orleans. 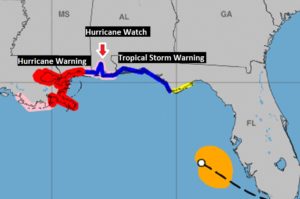 EXPECTED IMPACTS:  For us the greatest impacts would begin late Tuesday night, Wednesday and Thursday, including the threat of excessive rainfall, tropical tornadoes, and gusty wind, possibly gusting in the 30-40 mph range, with much higher amounts the father southwest you go in the state.  **Keep in mind this forecast will be changed and updated as the track of Sally changes and depends on Sally’s ultimate intensity. 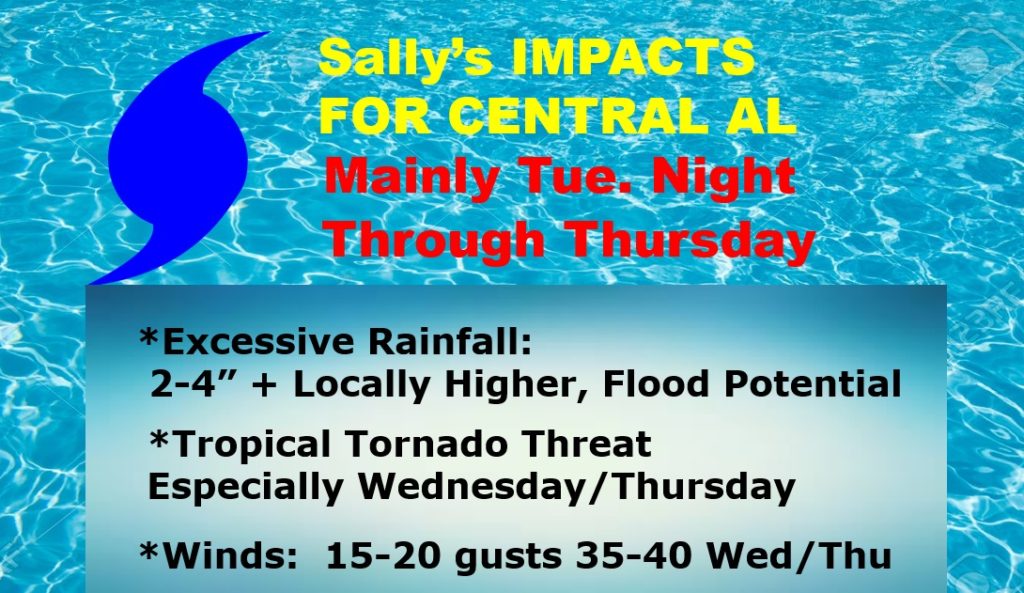 Rainfall amounts will be excessive.  And, this map is highly dependent of Sally’s track, timing and intensity. 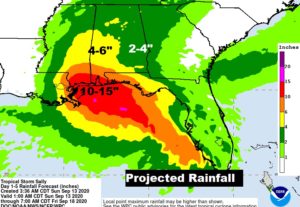 NEXT FEW DAYS:   All of this, obviously is subject to radical change depending on Sally’s Future path. 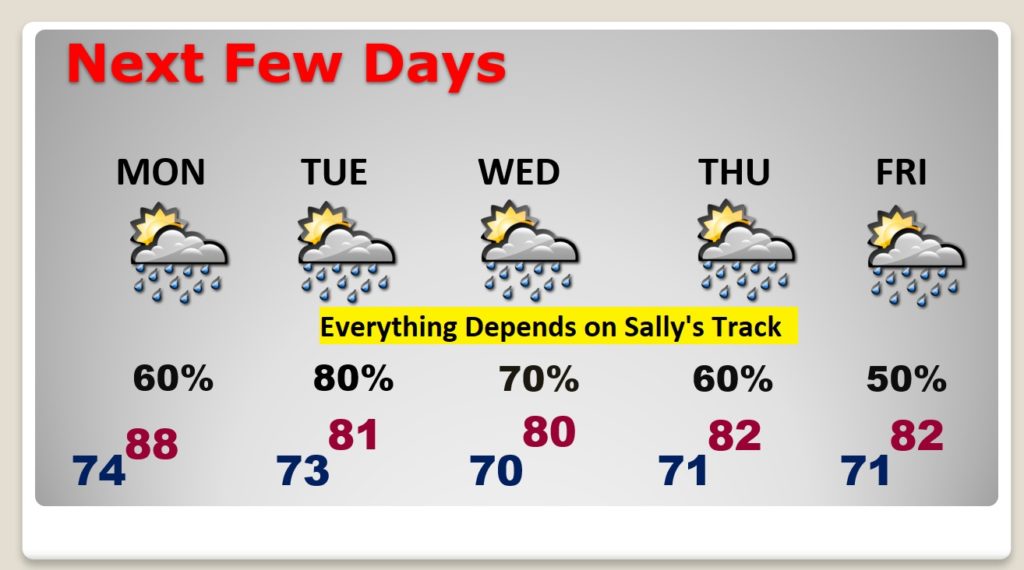 ELSEWHERE IN THE TROPICS:   The Hurricane Center has it’s handful.  There’s still Paulette and Rene and Tropical Depression Twenty, plus multiple areas to watch.  TD 20 will probably become “Teddy”. 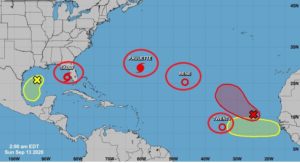 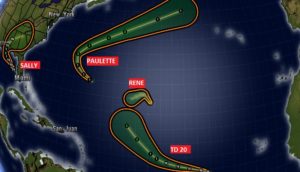 I’ll have a complete video Monday morning. There may be additional updates today as needed.  Stay safe and well. Enjoy your Sunday.