Elsewhere… Doppler Radar now estimates that parts of Covington county have now received more than 17″ of rain.  Many roads are closed.  Flash Flood Warnings continue for practically every county in south Alabama.

EMA and law enforcement officials report multiple flooded roads and many down trees blocking roads in Butler, Covington, Coffee and Geneva counties especially.  All city streets and roads in Andalusia and Opp are closed.  In fact many roads are closed until further notice, in numerous cities and towns in the counties above.   Alabama Power reports 160,000 customers are without power.  Many of those are in the coastal counties.

Sally is now a Tropical Storm with 70 mph winds, located 30 miles NNE of Pensacola, moving NNE at 5 mph.  Pressure 982 milibars. The storms will weaken to a depression tomorrow as it picks up forward speed.  Sally will be in Alabama for the rest of the day and tonight. dropping prolific rainfall amounts.

Prolific amounts of rainfall are being dumped on the state of Alabama from Sally, and the rain will be relentless for the rest of today, and through tonight and into tomorrow.  Numerous counties are under Flash Flood Watches and Warnings.

Take at the swath of heavy rain to come! 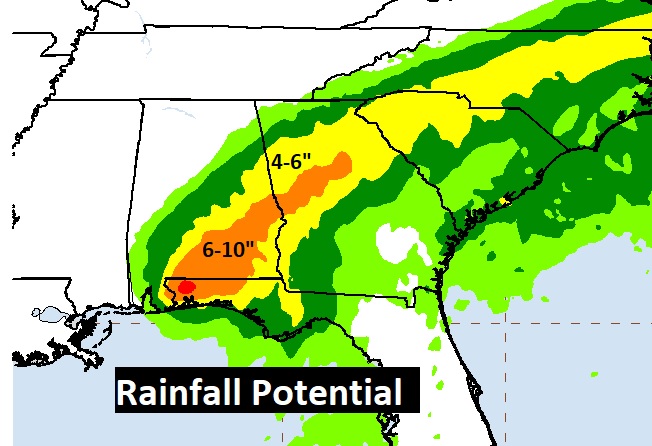 SPC has now further trimmed the risk area for spin up tornadoes. Now primarily confined to SE Alabama this afternoon and into this evening 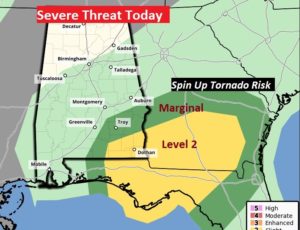 10 AM NHC UPDATE: Sally is 15 miles WNW of Pensacola, moving NNE at 5 mph. Winds now 80 mph. Came ashore at 5AM near Gulf Shores. It’s moved about 30 miles in 5 hours. At 7PM tonight it will have only made it to Andalusia, AL. Prolific life threatening flooding rain continues #alwx 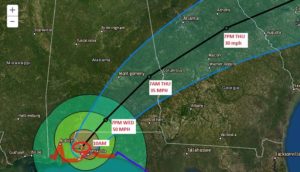 Hurricane Sally which came ashore at 5AM this morning with 105 mph , has now almost reached the AL/FL border 20 miles west of Pensacola, moving NNE at 4 mph.  Winds are now down to 85 mph.  We have heard reports of over 30″ of rain already just northwest of Pensacola.  Lots of damage and flooding reported in Mobile, Gulf Shores and especially Orange Beach.  Here in Alabama, just about every county in south Alabama is under a Flash Flood Warnings and they continue expanding northward. 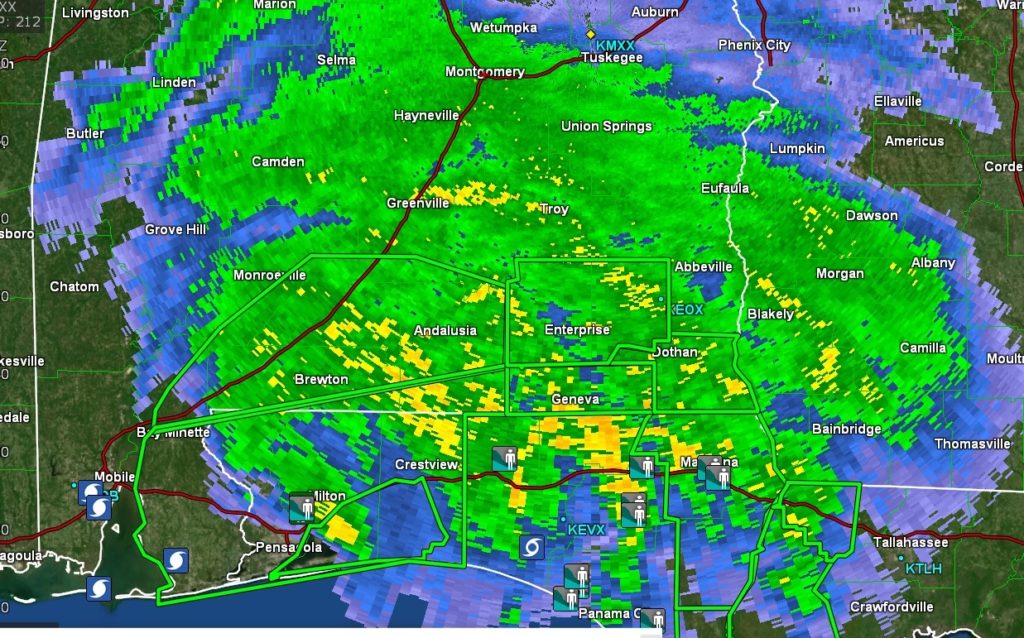 The extremely heavy rains will continue.  The flooding threat is particularly high. 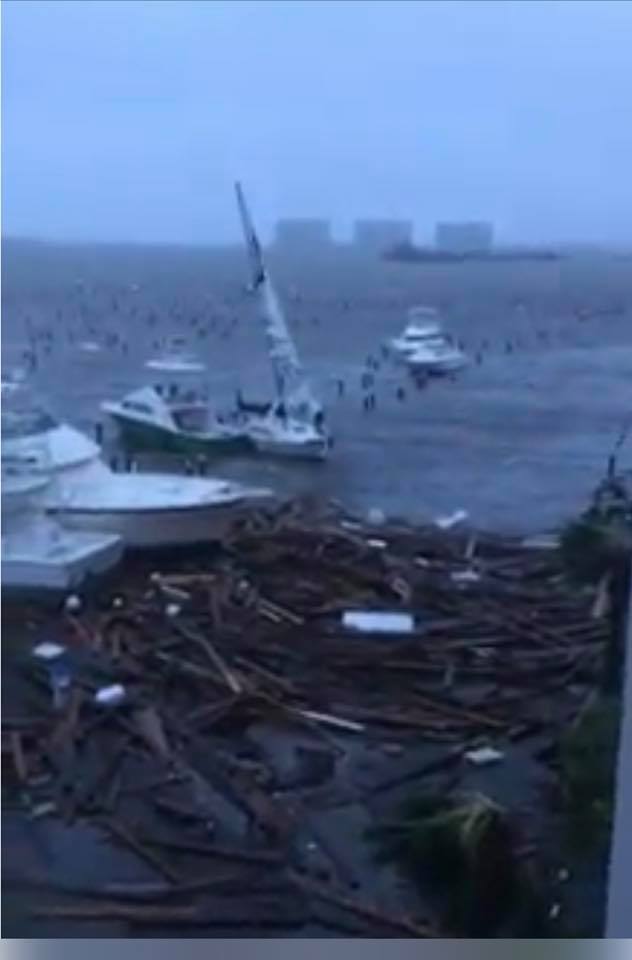 Another from Orange Beach 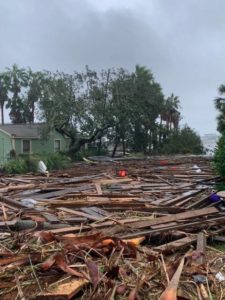 Here’s the pier at the state park in Gulf Shores 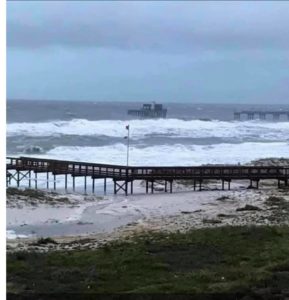 Early this morning, Sally’s Eyewall is already battering coastal Alabama and Florida with hurricane force winds.  Winds in Sally dramatically increased during the night to 105 mph at 4AM.  But, it’s the extremely slow movement of Sally, which will cause historic, life-threatening flooding to parts of especially south Alabama today.  The Weather Service is using the word “Catastrophic”.  Plus, the threat of spin up tornadoes.  But, hang on, after Sally the weekend looks spectacular.  Lots of good information on today’s video.

Look at the times on this map.  BY 1AM tomorrow morning, the center of Sally will still be in south Alabama.  Notice the track and the cone has shifted east again. 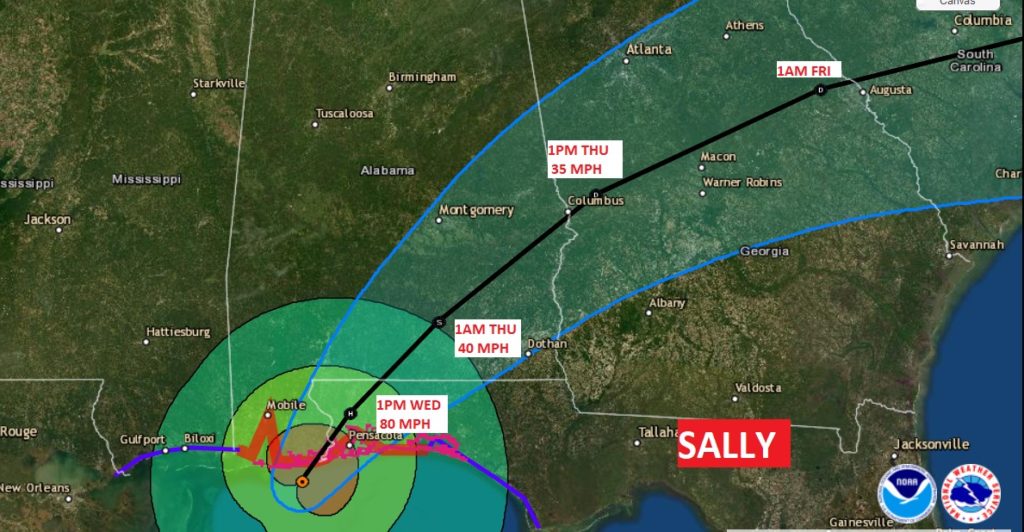 FLOODING rainfall amounts are likely today.  There will be many flash flood warnings. 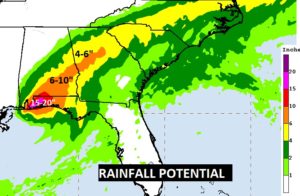 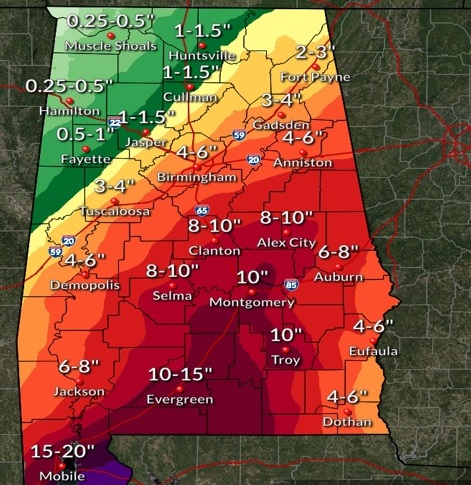 A few spin up tornadoes are a good bet today especially in south Alabama. 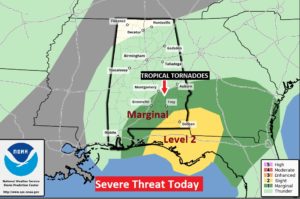 We could see some wind gusts close to tropical storm force later today. 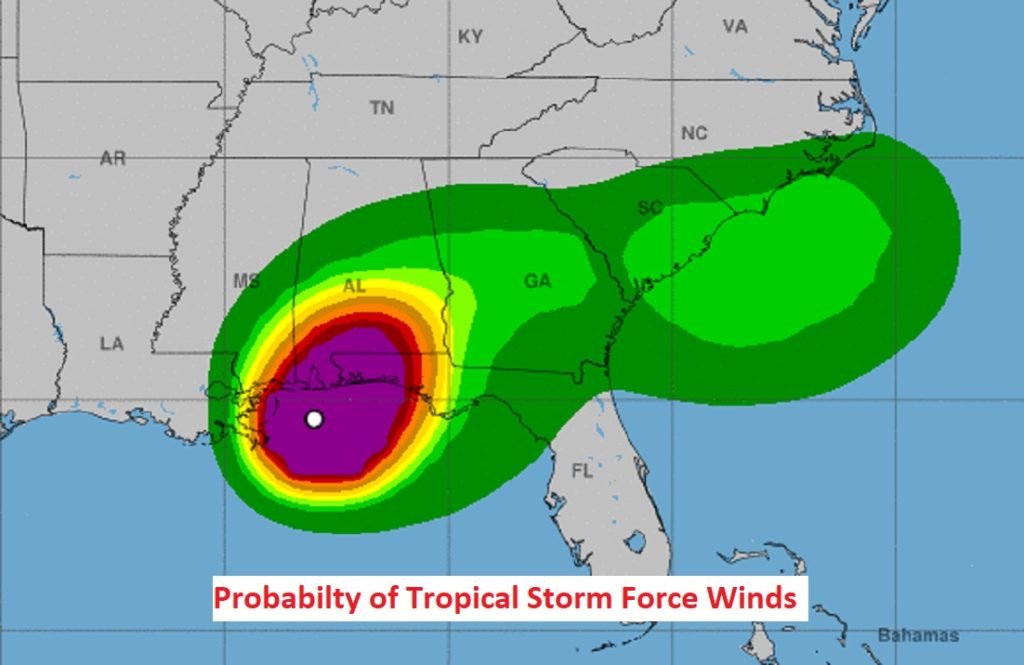 Han g on.  After Sally a nice cool front delivers some spectacular air for the weekend. 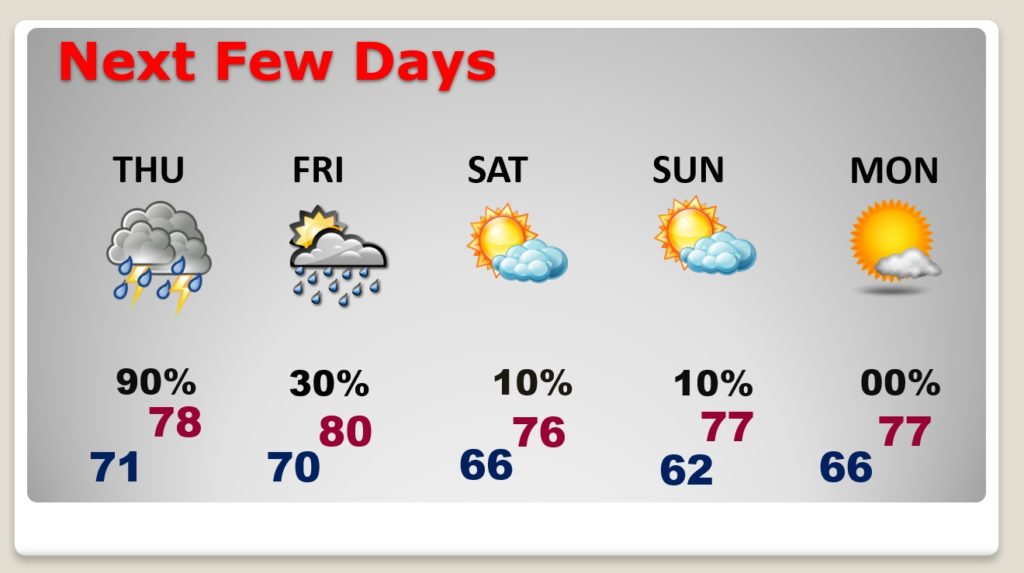